A big sound on campus 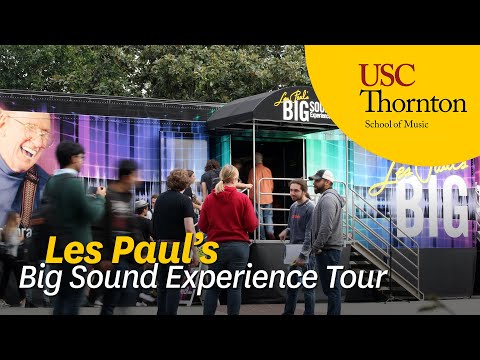 For two days in January, a movable feast of popular music history arrived on campus when Les Paul’s Big Sound Experience visited USC. The 53-foot mobile museum has been making its way across the country to share the history of Les Paul, a legendary inventor, musician and leader in the music industry.

On January 28 and 29, USC students enjoyed interactive exhibits, music exploration and hands-on entertainment in the 1,000 square foot space, including a public lecture by Chris Sampson, vice dean of the Contemporary Music Division.

Paul was an innovator who invented the solid body electric guitar, multi-track recording, over-dubbing and many other recording techniques still used today. The anniversary tour is meant to inspire college students to learn more about Paul’s impact on the industry, while also increasing their interest in the engineering of sound and music.

Students explored a variety of different modules that led them through the highlights of Paul’s life, allowed them to listen to the distinctive impacts he made to music through the years, and showed them exclusive video interviews with Paul himself.

“Our goal is to reintroduce Les to a new generation of music lovers,” said Michael Braunstein, executive director of the Les Paul Foundation, sponsors of the tour.

The mobile exhibit started in New York City and has since traveled across the U.S. It will return to the East Coast and complete its tour by the end of May 2016.