A Legacy of Her Own 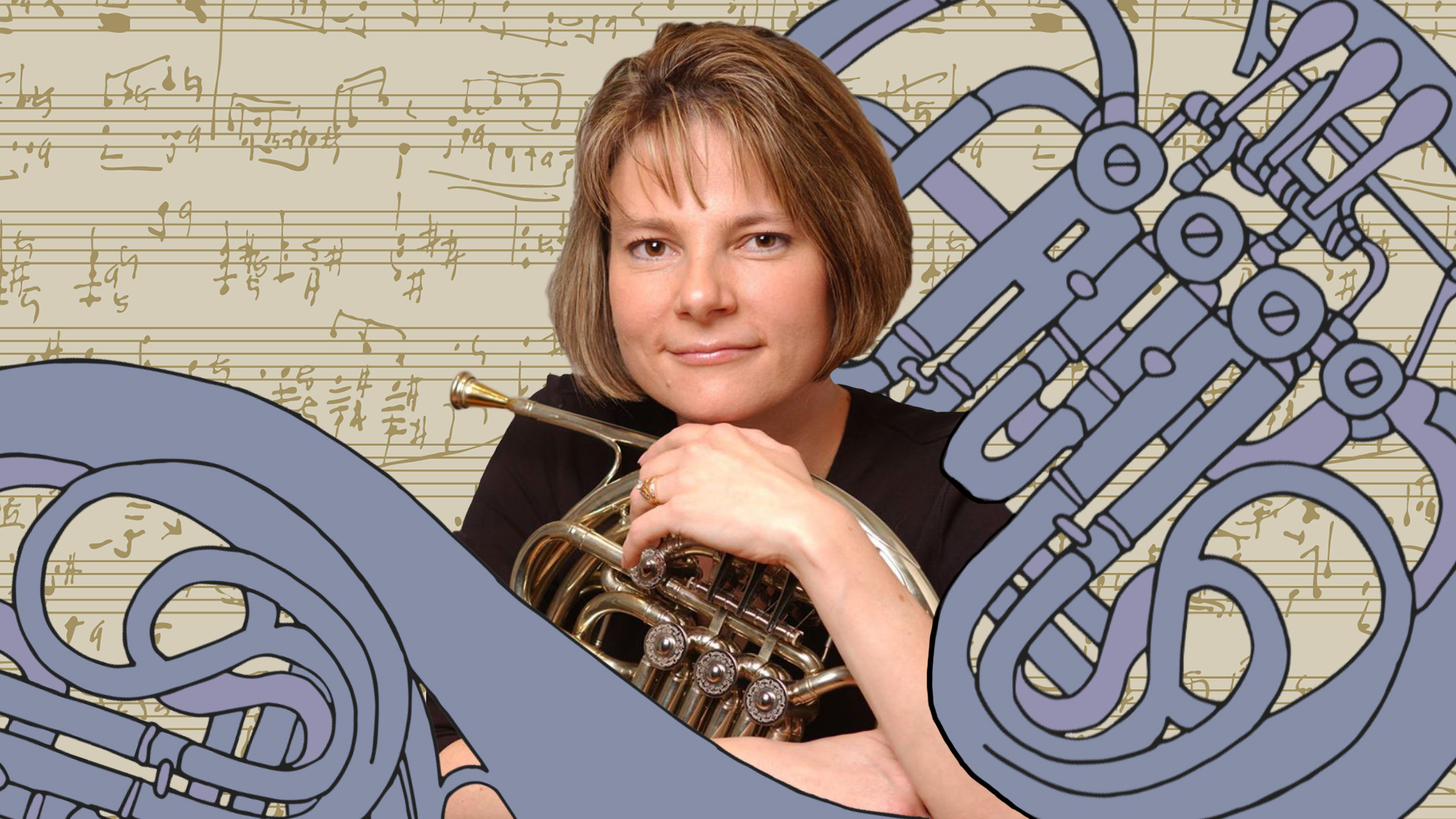 Kristy Morrell took the baton from USC Thornton’s distinguished faculty and ran with it. She moves to a new institution while one of her horn heroes takes her place.

Kristy Morrell (MM ’94, DMA ’97) has a lot to be proud of in a career that spans university teaching, orchestral performance and studio recording.

She became the first female faculty member to teach French horn and then chair the Winds and Percussion department at USC Thornton. 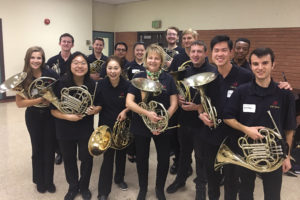 When women were a rarity in studio recording, she was doing it all the time. To date, she has worked on more than 600 films, in addition to albums, television shows and video games, with composers such as John Williams, Alan Silvestri, James Horner and Jerry Goldsmith.

She looks forward to starting her 23rd season with the Los Angeles Chamber Orchestra (LACO), where she won a seat six months before finishing her DMA at USC.

But more important to her than any single accomplishment, Morrell said, is the fact that she built a blended career without sacrificing anything along the way.

“You get well-meaning advice from people that you should go to auditions and wherever you get a job you go there. What about a husband and a family? I was told: you may never have another chance. And I thought, no, I don’t want to do it that way.

“My greatest accomplishment is that I’ve done it my way,” said Morrell, who celebrates more than 25 years with USC Thornton as a student and faculty member and heads to Baylor University this fall.

Doing It Her Way

After earning her undergraduate degree at the Eastman School of Music and performing as second horn with the Boise Philharmonic Orchestra, Morrell moved to Los Angeles because her husband, composer Steve Morrell, wanted to write for film and television. She earned her MA at USC Thornton and stayed for her DMA.

“My final semester there it was like divine intervention because all of a sudden a job opened up at LACO. I walked right into a playing career,” Morrell said. She stayed on as an adjunct at USC Thornton, joined the faculty full time in 2010 and became chair in 2015. 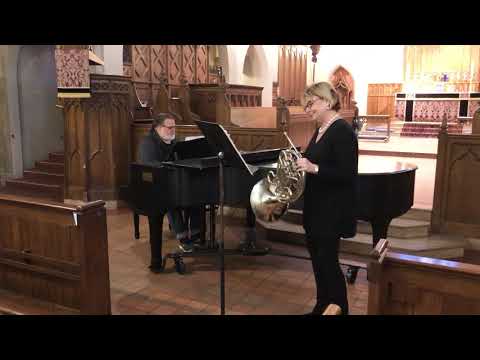 “I was able to find success, and my husband and I had a family and built a life,” she said. “I love that versatility of what I do and that I can teach and have my family and still play at the highest level in the Chamber Orchestra. At the end of my career, I’d like to look back and think that I did that — and that I helped other musicians realize their dream.”

Young musicians at USC Thornton are realizing their dreams at an astonishing pace. For years, the number of Thornton students winning coveted orchestra seats has been remarkable. “Most of my students leave with jobs from the graduate program,” Morrell said. “And most of our horn students from USC all are making huge contributions to the recording industry.”

Part of the reason for this success, Morrell said, is that Thornton has faculty both committed to mentoring and education and working in a music industry capital. Working faculty teach their students the realities of the industry and can get them into the local scene, often before they graduate.

In Morrell’s department, almost every faculty member is currently playing in Los Angeles. “That’s kind of a unique thing about USC Thornton’s Winds and Percussion faculty, and so much of the school as well,” she said. “It gives a different perspective when you study with somebody who’s working professionally. It’s the model for our department — and how it started.”

When Morrell came to USC Thornton for her graduate studies, two of Hollywood’s biggest studio players were on the faculty, James Decker and Vince DeRosa.

Decker was principal horn with LACO under Sir Neville Marriner and played chamber music with Jascha Heifetz and Gregor Piatigorsky. He worked on movie and television soundtracks and performed with legendary singers like Ella Fitzgerald and Frank Sinatra. He was known to be one of three orchestra musicians favored by Igor Stravinsky and played principal under the composer in many of his most famous works.

DeRosa is one of the most recorded brass players of all time. His 70-year career included working as principal horn for composers like Henry Mancini and John Williams and recording with artists as varied as Frank Sinatra and Frank Zappa. Williams had the highest praise for him: “Vince DeRosa’s contribution to American music can’t be overstated. He was the premier first horn player on virtually every recording to come out of Hollywood for over 40 years. He represented the pinnacle of instrumental performance, and I can honestly say that what I know about writing for the French horn, I learned from him.”

Having Decker and DeRosa as teachers and mentors was “the greatest experience ever,” Morrell said. “They were extremely supportive, and I got a great real-world education. The kinds of things I learned at USC were practical — the ultimate pragmatic instruction. I try to retain that in my own teaching.”

Keeping a Tradition of Excellence Going

As one example of her pragmatic approach, Morrell put a new course on the books nine years ago: Career Strategy for Brass, Winds and Percussion. It takes students through the skills they need to win jobs: resume writing, networking, protocols of the orchestral world, preparing for orchestral auditions and solo competitions, preventing injuries, strategies for performance anxiety, and entrepreneurial thinking. Morrell summarized: “You want to work for a living? Here’s what you need to know.”

Entrepreneurial thinking is one of the topics that gets frequent updates, but Morrell always tells her students: “The best strategy for a performing musician today is to have at least three income sources.” Those could be having your own business making reeds or maintaining a social media presence, in addition to performing or teaching. “It’s like the gig economy,” Morrell said, “but we’ve been doing this since way before it was cool.” 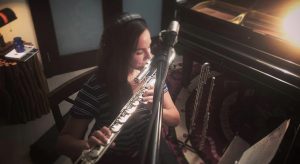 One of Morrell’s past students, Gina Luciani, followed her guidance to pursue multiple sources of income and built an active following as a content creator. (Photo courtesy of Luciani)

One of her earliest students, Gina Luciani (MM ’13), took Morrell’s instruction to heart and has seen great success. Morrell would invite her back to campus for masterclasses on social media.

While professional success is important, another priority for Morrell is community outreach. During her time as chair, she encouraged all of her students to perform for underserved communities. She believes that musicians should share their gift widely, a view that stems from her strong faith.

“The students love it. They want to help and serve and do things to elevate the lives of people around them,” Morrell said. “Sometimes their ideas for revenue sources included community outreach. For instance, they could go into prisons and participate in existing programs.”

The Trojan Brass, the student-run horn ensemble Morrell helped to start and mentored, plays at LAC + USC Medical Center three times a semester. One time a grad student played his junior recital outdoors at the hospital. “I counted how many people stopped to listen,” Morrell said. “It was 600 people. For a French horn recital, that’s about 550 more people than you would generally have. The students loved that so much, they found it to be so rewarding.”

For the past eight years, Morrell has taught alongside Steven Becknell (MM ’84) who joined USC Thornton as an adjunct instructor in 2012. He has been principal horn with the LA Opera Orchestra for more than 25 years and recorded on well over 1,000 motion pictures.

“The USC Thornton School of Music has always been a world-class institution and a big draw to music students due in large part to its distinguished faculty,” Becknell said. “That was what enticed me to come to the school as a student: the opportunity to study with Vince DeRosa and Jim Decker.”

“The contributions of Kristy cannot be overstated,” Becknell said. “She was responsible for helping bring me onto the Thornton faculty, and she already had a smooth-running horn studio in place. She was a great teacher, a mentor to the students, and knew the inner workings of the Thornton School so she could really get things done. She was a great colleague to work with, and she will be sorely missed!” 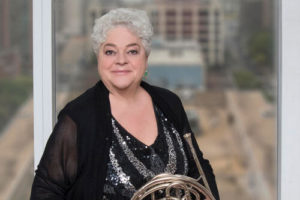 Renowned performer and teacher Julie Landsman, a personal hero of Morrell’s, joins the faculty this fall and continues the program’s legacy of excellence. (Photo courtesy of Landsman)

As Morrell moves on, USC Thornton’s tradition of excellence continues with the addition of Julie Landsman, who was the principal horn with the Metropolitan Opera Orchestra for 25 years. For the time being, she will teach at USC Thornton and the Juilliard School, her alma mater and where she has taught for three decades.

Landsman became a role model for women musicians, including Morrell, when she won the first horn chair at the Met in a screened audition at a time when women rarely held principal positions. “She was my horn hero,” Morrell said. “When I was in high school, there were very few women playing horn, but she was one of them. She was the first person I saw doing what I wanted to do, and it made me believe that women could do that.

“I think it’s a neat thing that my hero is coming in and she’s a supportive mentor, especially for women who play the horn.”