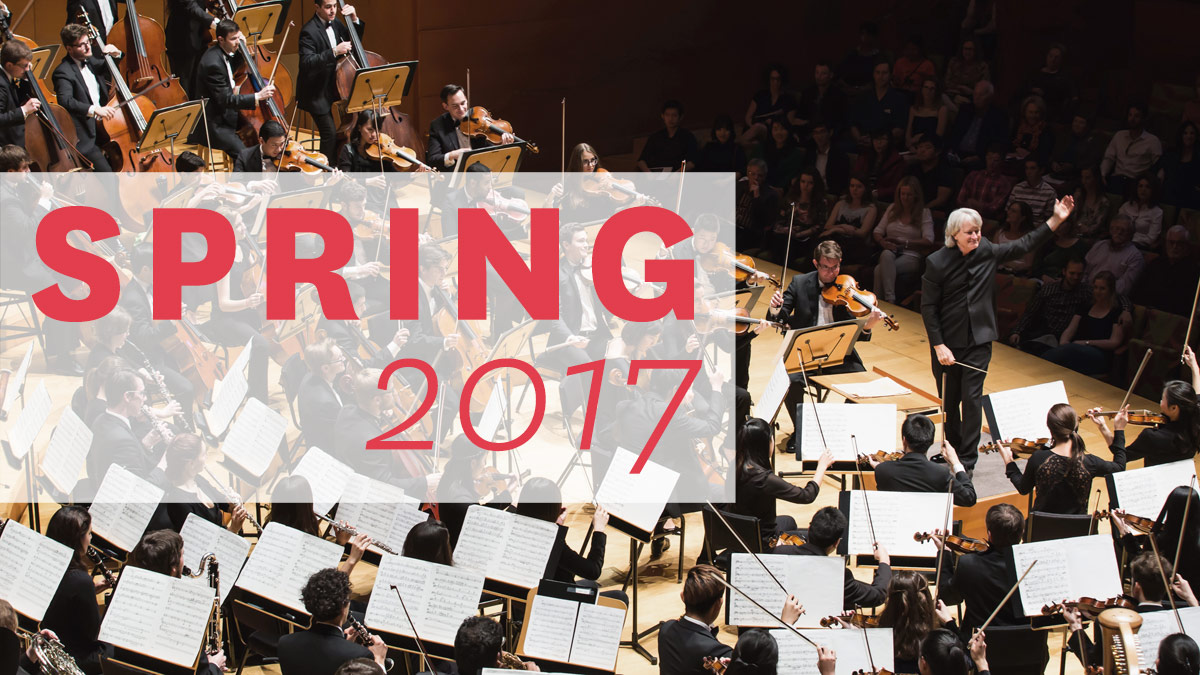 This week, as our students wrap up their final exams and return home for the holiday break, we reflect upon a lively fall semester at USC Thornton.

Most notably, Dean Robert Cutietta announced several new study abroad opportunities for music students and the school launched a welcome video to celebrate our membership in the Association of European Conservatories. 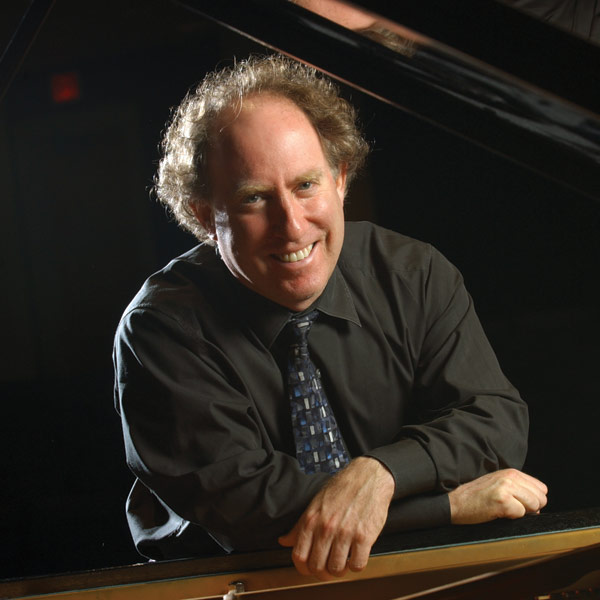 Faculty composer Andrew Norman received the prestigious Grawemeyer Award for Music Composition and was also named Composer of the Year by Musical America. Julia Adolphe, a DMA candidate in the Composition program, premiered a viola concerto with the New York Philharmonic and alumna Cynthia Phelps (’78).

Beginning a year of collaborative programming, Thornton hosted a Los Angeles Chamber Orchestra (LACO) concert featuring cellist Yo-Yo Ma and pianist and music director Jeffrey Kahane, who joined the faculty part time last fall and will become a full-time professor after stepping down from his LACO post in 2017.

Paul Jackson, Jr., one of the most recorded guitarists in the world, joined our Popular Music program as an artist-in-residence. And several jazz and classical faculty members received GRAMMY Award nominations, along with a slew of Thornton alumni.

For more feature stories from the past semester, visit our Spotlight archive.

We’ll begin the spring semester with two events for USC Visions & Voices; the Arts and Humanities Initiative: “Forging The Knife” will bring Jeffrey Kahane and violinist Daniel Hope together with musicians from Thornton and LACO to explore the chamber roots of Kurt Weill. Soon after, we will celebrate a contemporary work of music theater with “Hopscotch in Concert,” featuring live performances from one of the most talked-about cultural events of 2015.

The USC Thornton Symphony returns to Walt Disney Concert Hall in January with conductor Carl St.Clair for a program of Mozart and Strauss with Keyboard Studies faculty members Bernadene Blaha and Kevin Fitz-Gerald. The Symphony will also welcome guest conductor David Lockington for its annual concerto night and Uriel Segal for a performance of Mahler’s “Tragic” Symphony No. 6. LACO concertmaster Margaret Batjer then leads the Chamber Orchestra in a conductorless program of Haydn and Mendelssohn.

H. Robert Reynolds and Sharon Lavery will lead the USC Thornton Wind Ensemble in a celebration of American composers and the Thornton Edge new music ensemble will present a program of concertos, including one by Composition chair Donald Crockett.

Clarinetist David Howard and bassoonist Shawn Mouser will collaborate on a joint faculty recital, while members of the Early Music faculty join forces for a recital of music from before and after the German Reformation.

The celebrated USC Thornton Opera program will present four performances of Hector Berlioz’s comic masterpiece, Béatrice et Bénédict, based on Shakespeare’s Much Ado About Nothing, as well as a program of selected Opera Scenes.

A new work by bandleader and composer Bob Mintzer is the spotlight of a performance by the Thornton Jazz Orchestra, in collaboration with the school’s Classical Performance & Composition Division, while the Concert Jazz Orchestra will celebrate the biggest jazz album of all-time, Miles Davis’ Kind of Blue. 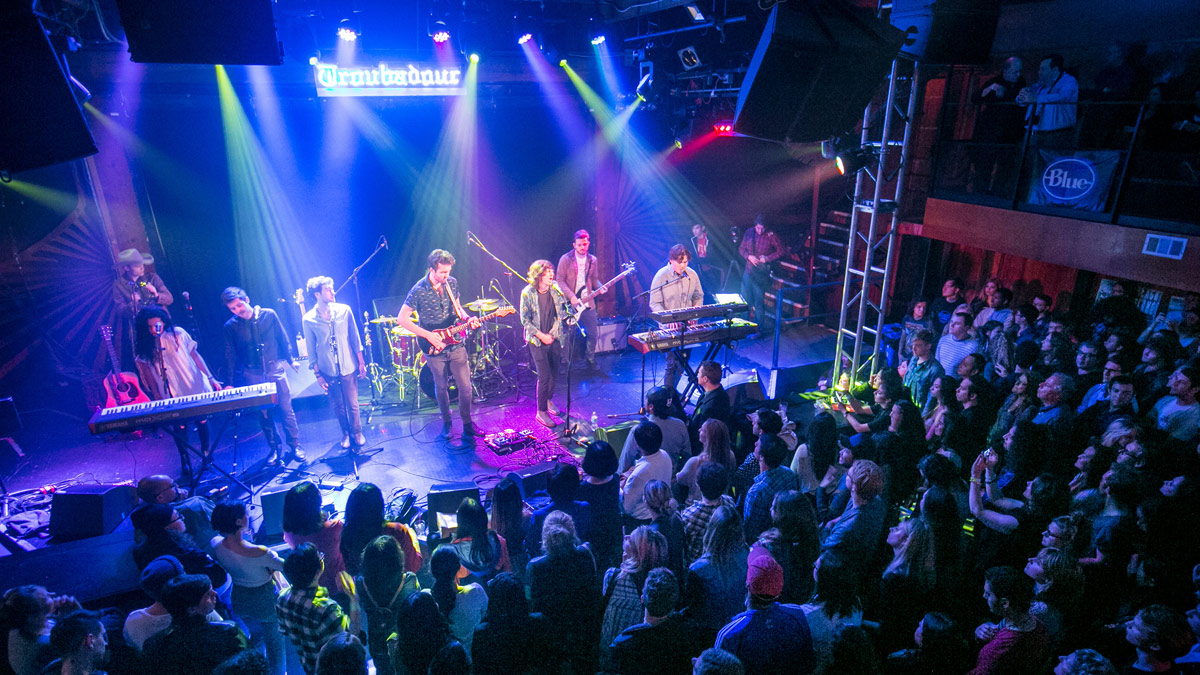 Graduating seniors in the Popular Music program will strut their stuff at the Troubadour in West Hollywood this March. (Photo by David Sprague)

The USC Thornton Concert Choir presents a unique, collaborative concert with ten international composers of our time, including Thornton faculty members Morten Lauridsen and Frank Ticheli. The University Chorus will explore “Music Under Oppression” in a concert at St. John’s Episcopal Cathedral, while the Chamber Singers will present a program of “Prayers and Intercessions.”

The Polish Music Center will “Explore the Avant-Garde” of the 1960’s in a performance by the adventurous gnarwhallaby ensemble, while the USC Collegium Workshop will explore the revolutionary music of 1571 with a concert of devotional music around the Reformation.

And the Popular Music program returns to the Troubadour this spring, with a Senior Showcase performance at the legendary West Hollywood venue.

Almost all of our concerts, events, recitals, and masterclasses are free and open to the public. For the full list of spring events at USC Thornton, explore our events calendar today.