A Summer In France 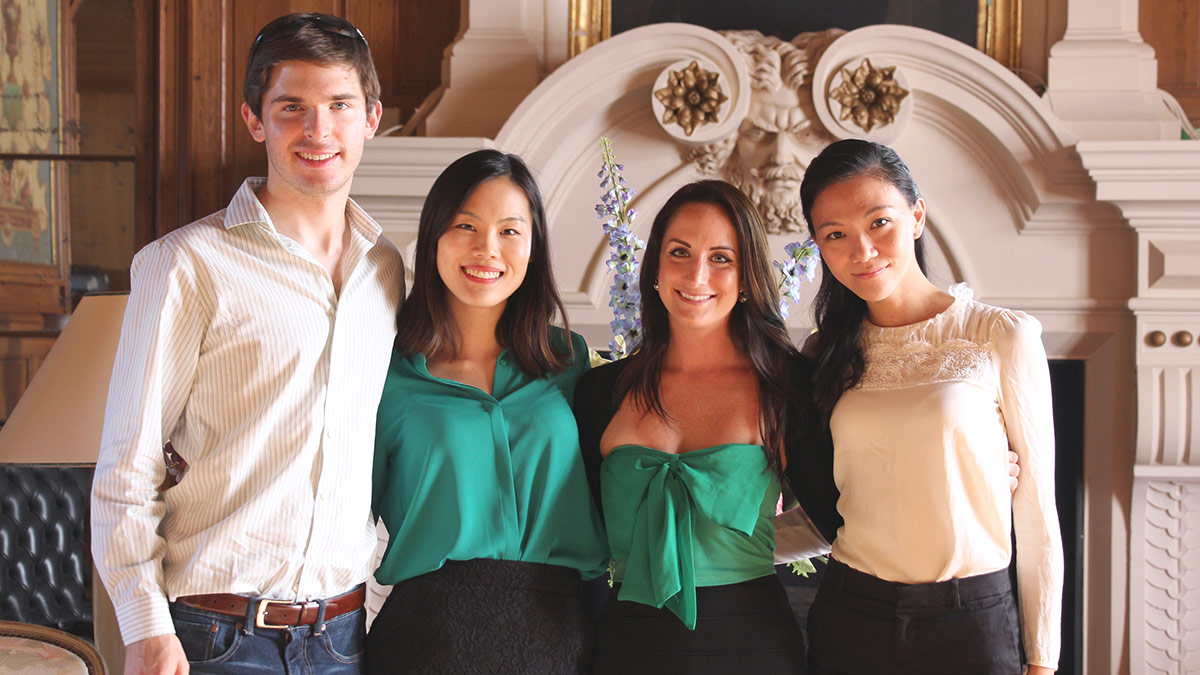 “The word rencontre means an encounter, a meeting,” said Lucinda Carver, Vice Dean of Classical Performance and Composition. “The spirit of the event is not just a musical rencontre but also a cultural one.”

Every summer, USC Thornton sends a string quartet to the French countryside to play in a chamber music festival with musicians from the Paris Conservatory. The festival, Rencontres franco-américaines de Musique de Chambre, was created in 1999 to provide high-quality chamber music to French audiences, and to encourage dialogue and collaboration among American and French cultures.

“The chance to spend 10 days in France is extraordinary in and of itself, but the opportunity to play with the exceptional French musicians and experience these wonderful audiences is really something,” said Carver. “It is a very meaningful exchange. There is a deep love and respect for classical music. You can feel it when you play these concerts: there is truly a profound appreciation.”

The Thornton quartet was selected at the end of the fall semester through an audition process. “Each of the individual players has to be strong, but we’re also looking for a excellent sense of cohesiveness within the quartet,” said Carver. “Quartet playing is a great art. In addition to technical skills, there is the question of how well they communicate with one another. In short, we’re looking for students who are going to make Thornton shine.”

After getting input from the students, Carver and Salque worked together to select the program for the festival, which was mainly classical music — but not exclusively. “François likes to bring in non-classical musicians so we had some great jazz musicians as guest performers,” Carver said. 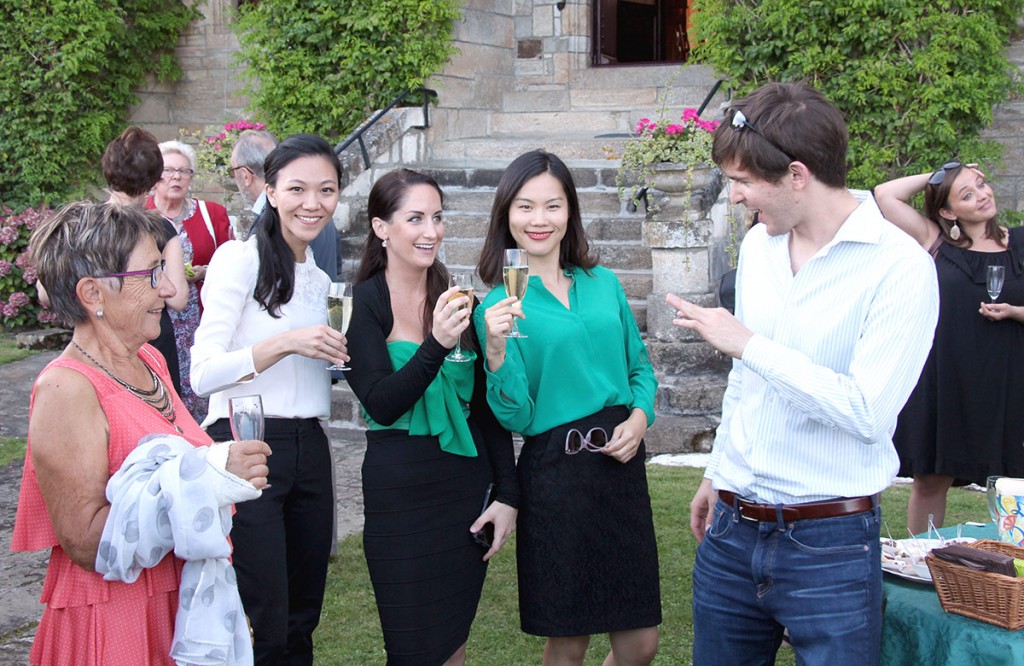 The quartet arrives for a reception at Château de la Bretesche in Missillac, France. 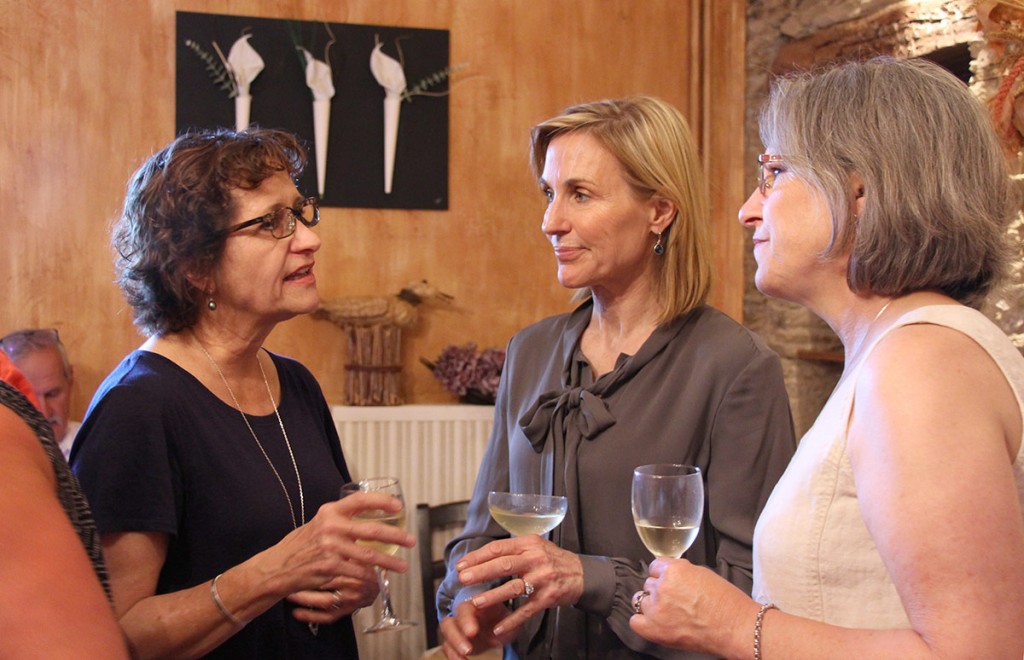 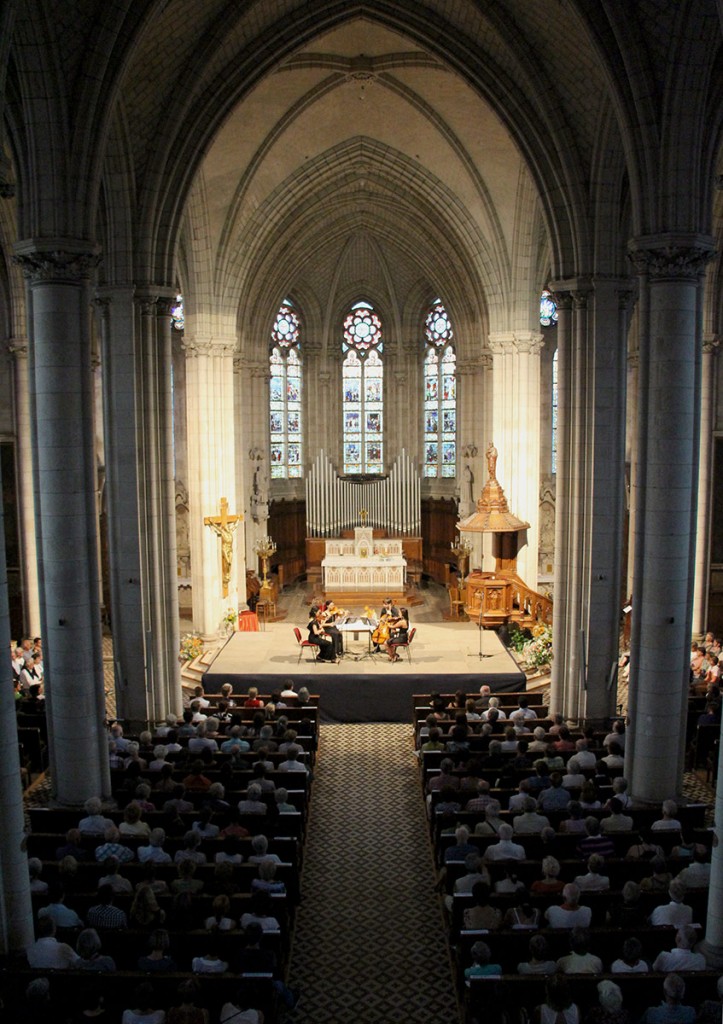 The Église de Missillac was one of several local venues where the quartet performed to appreciative audiences. 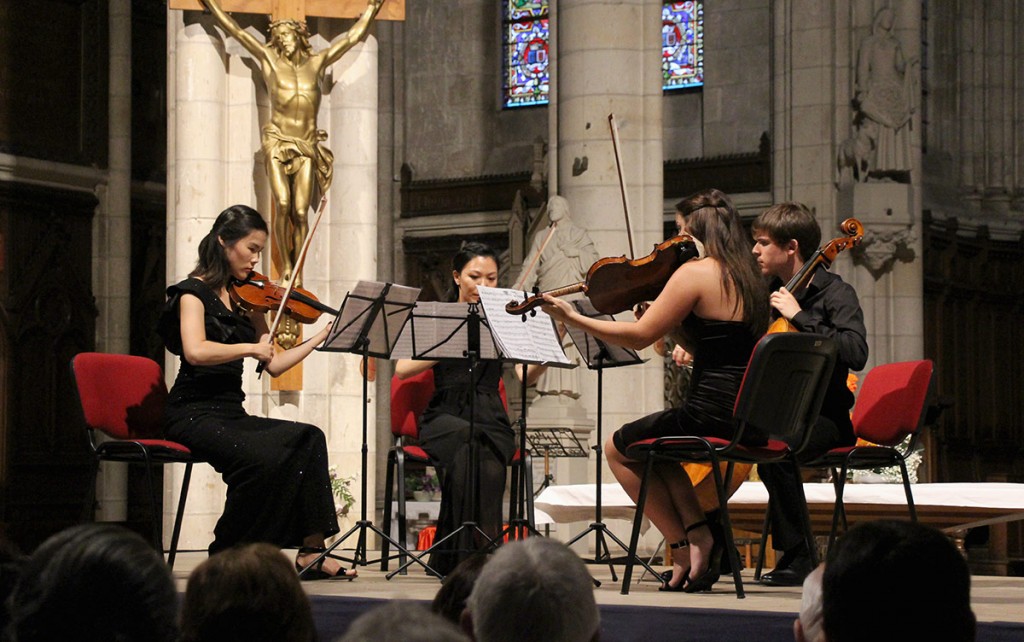 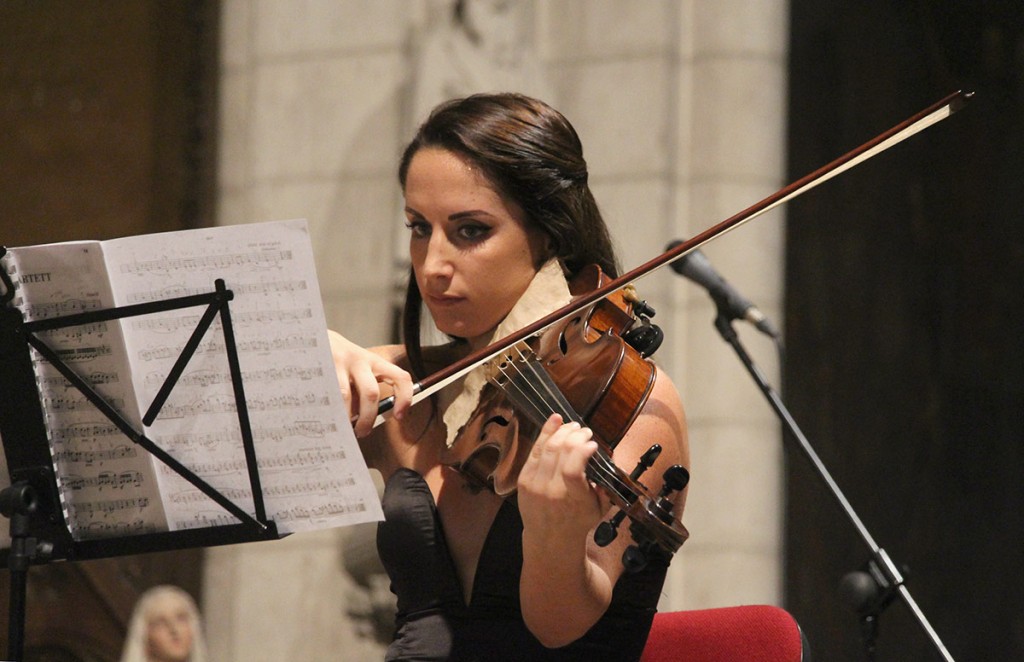 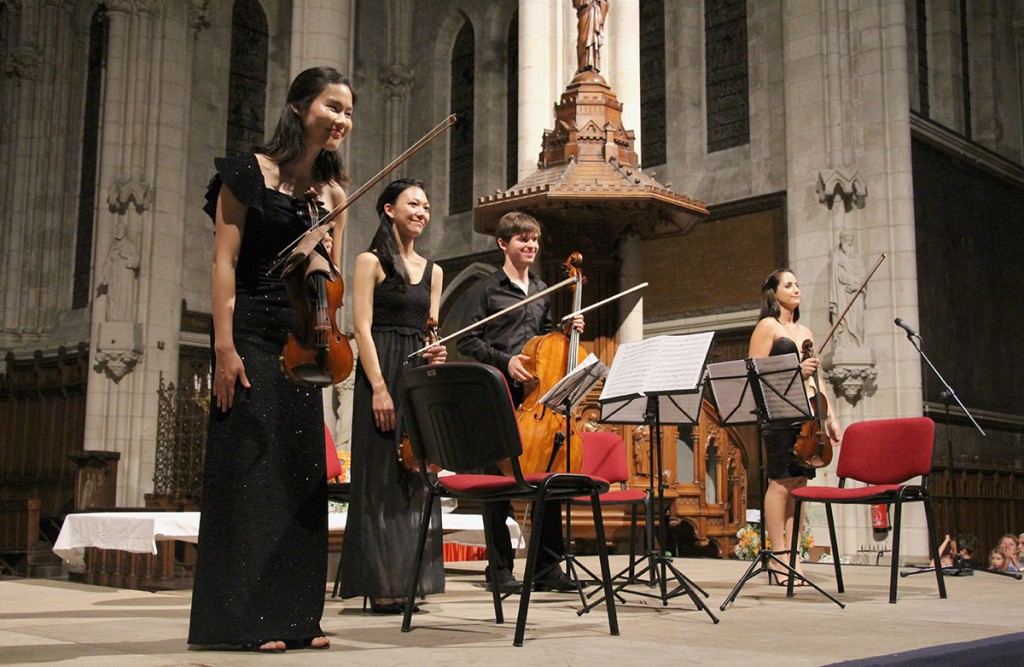 Audiences at the festival were extremely appreciative. 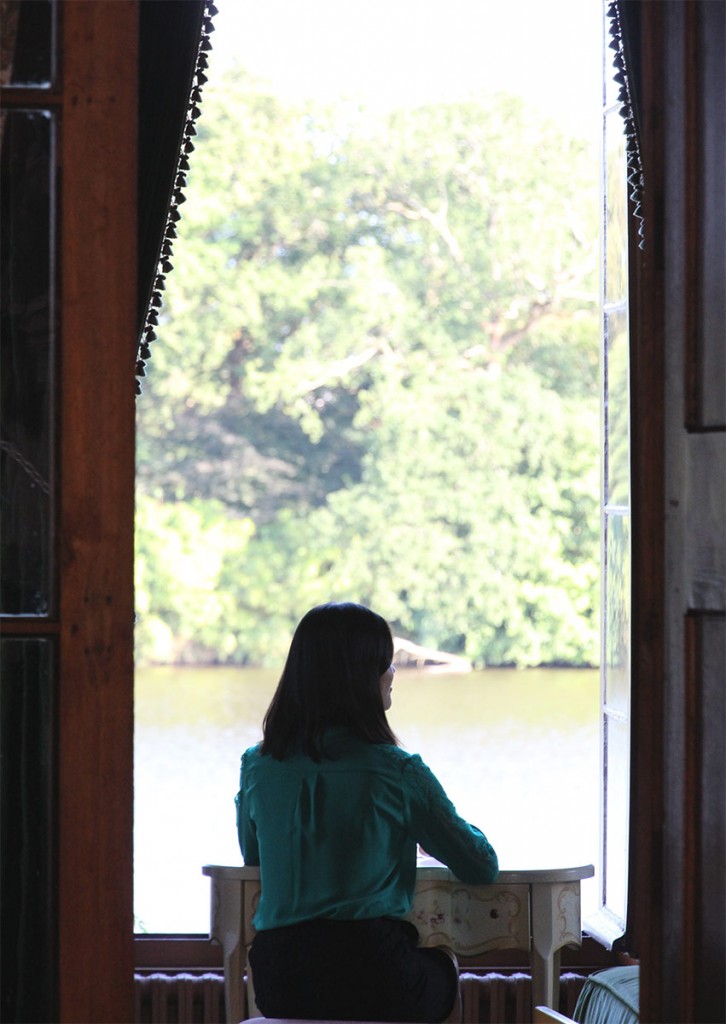 Relaxing between performances at the Château de la Bretesche. 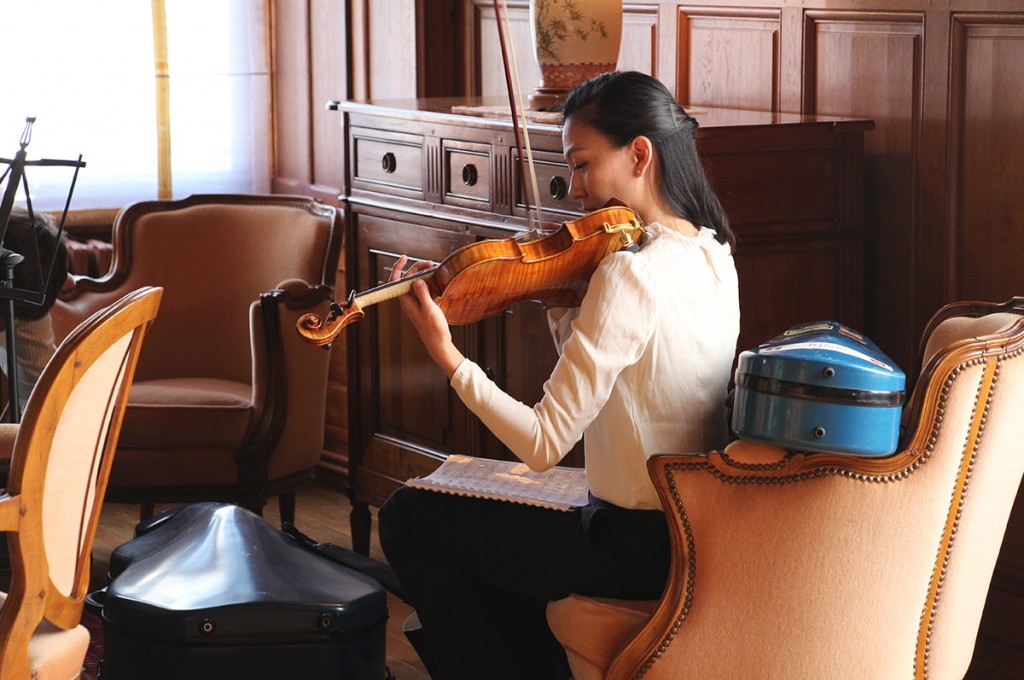 A moment of practice. 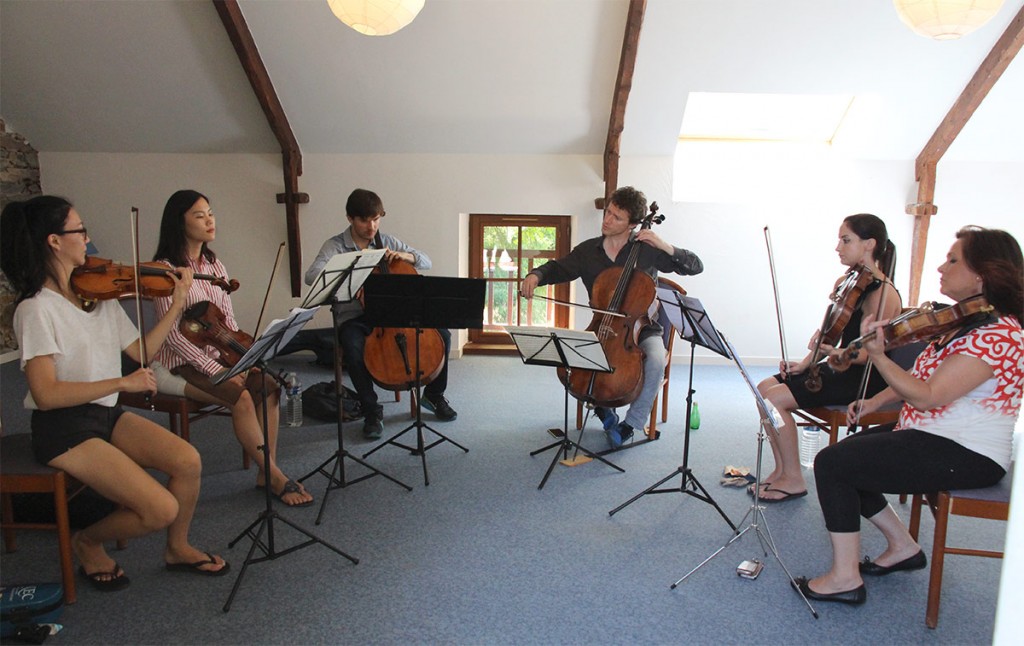 Coaching sessions in chamber music were central to the festival. Here, the quartet works with cellist François Salque, a professor at the Paris Conservatory. 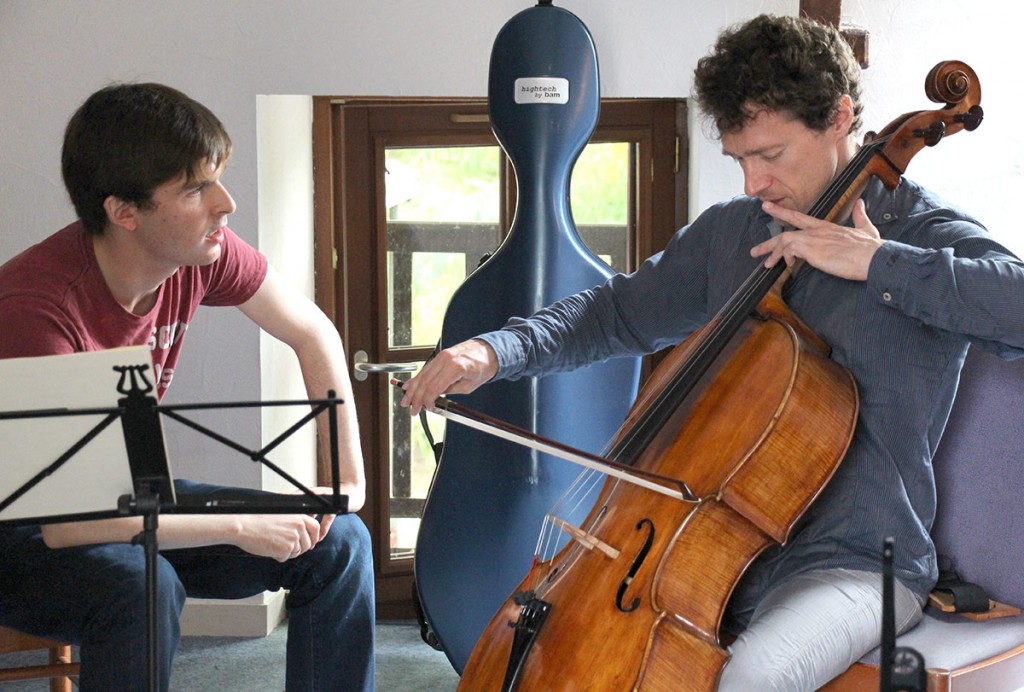 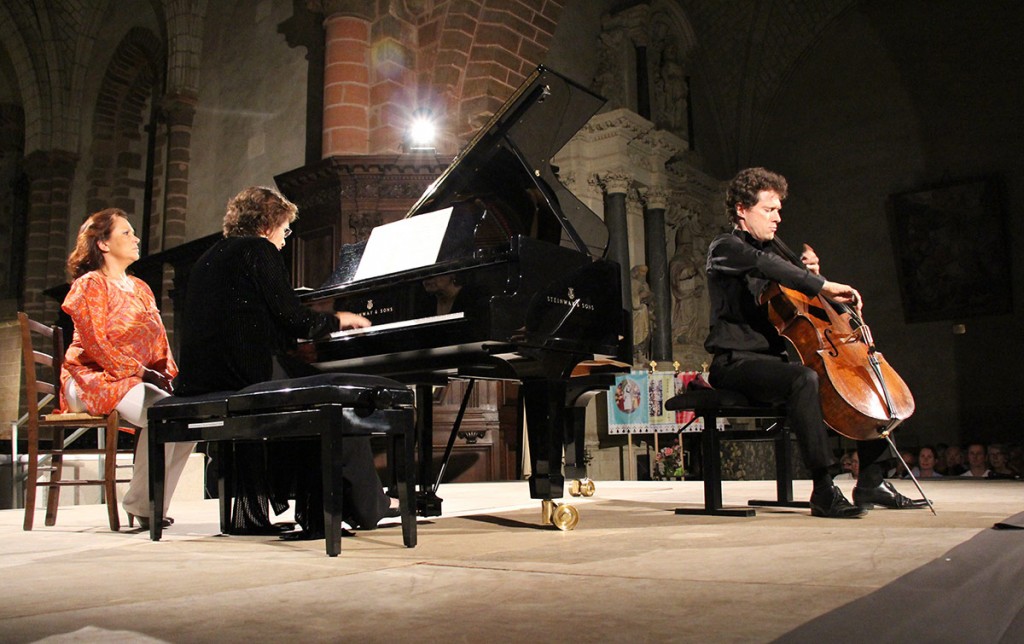 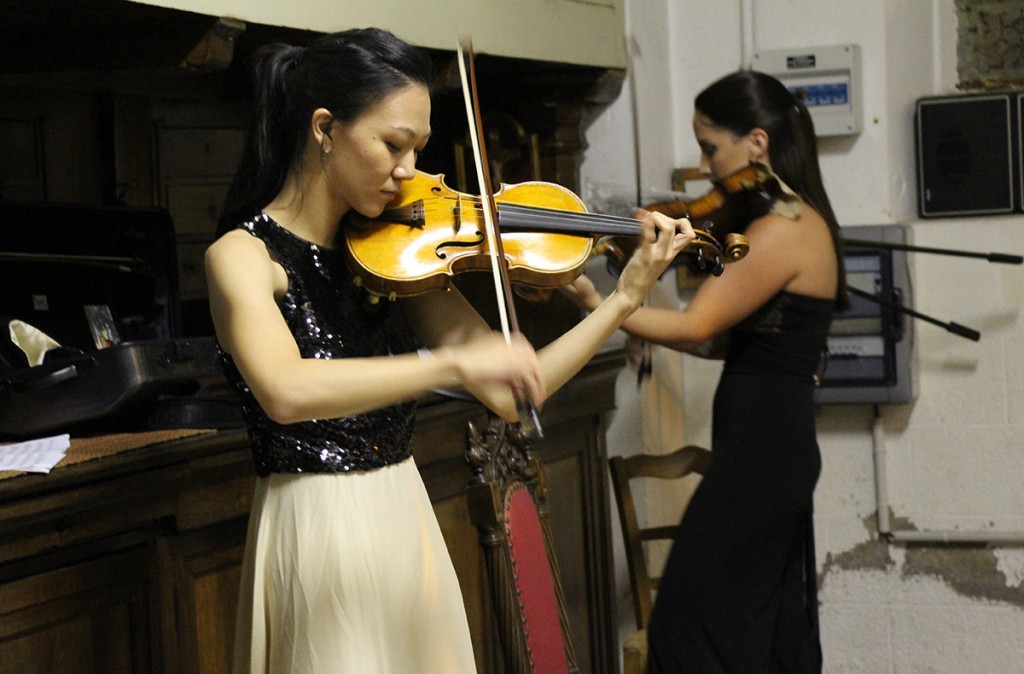 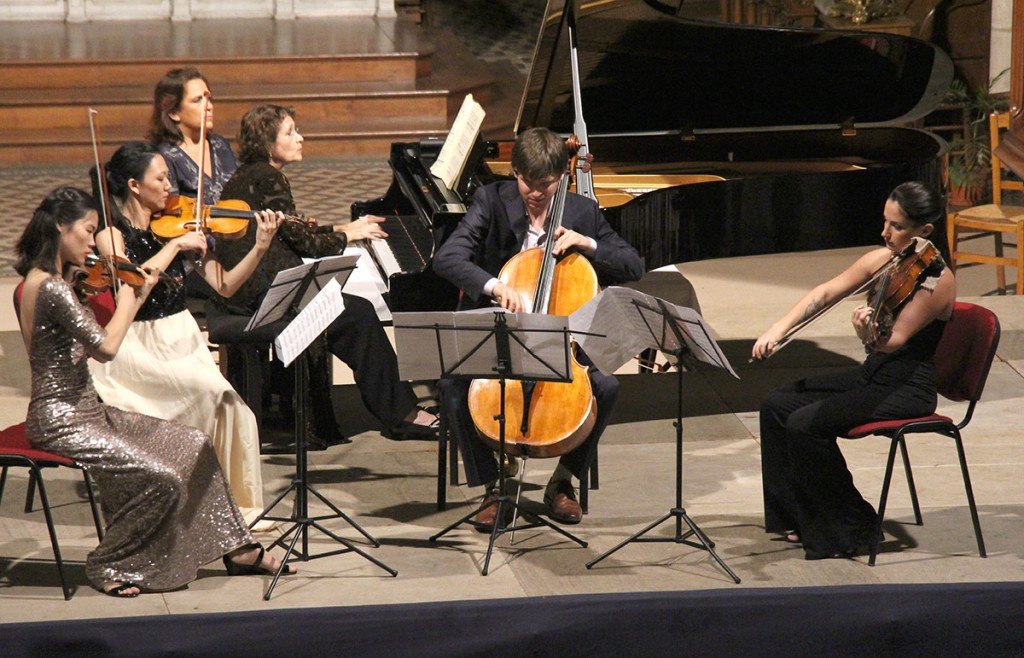 Lucinda Carver also performed with the quartet at the Château de la Bretesche. 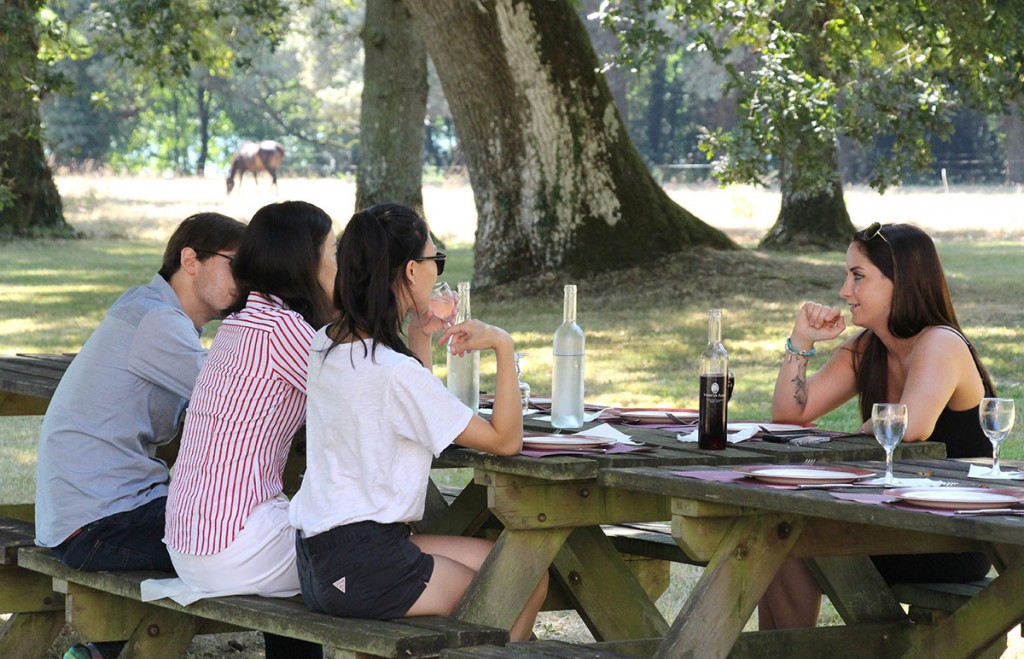 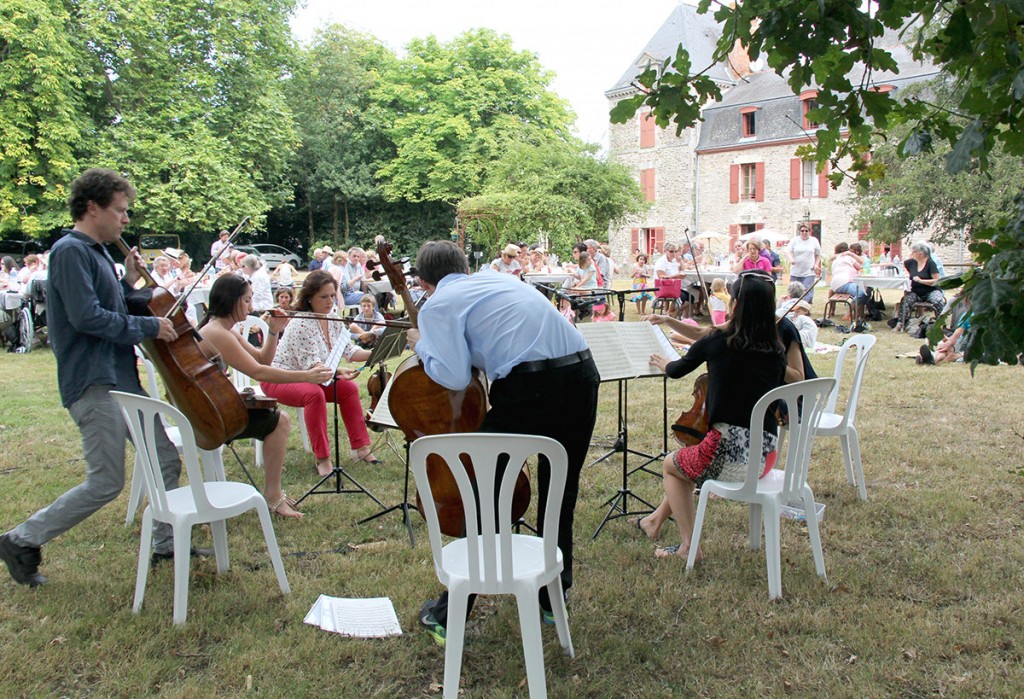 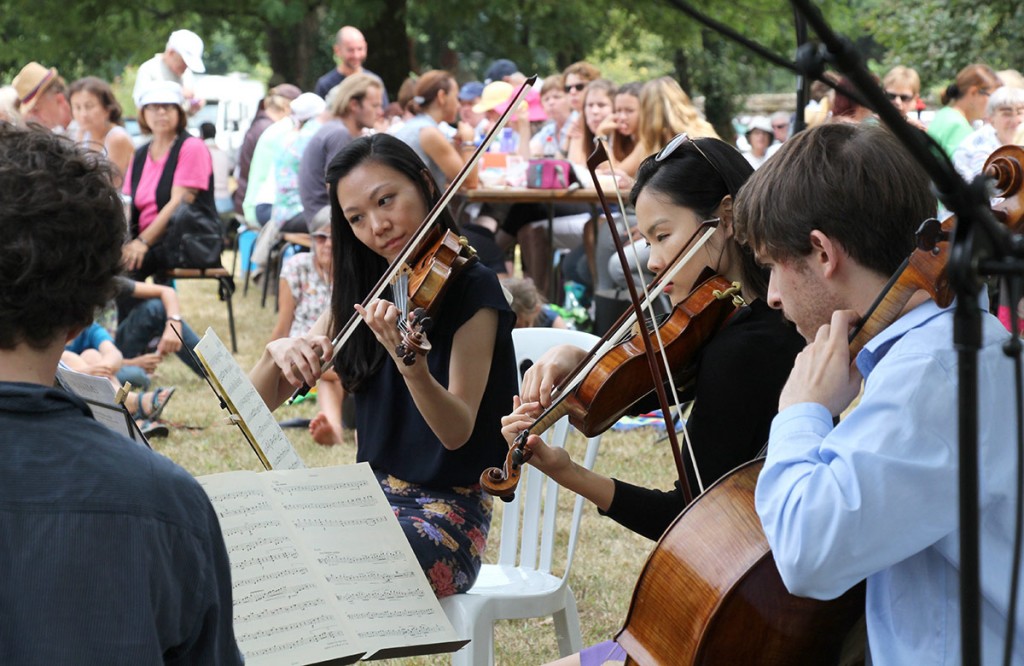 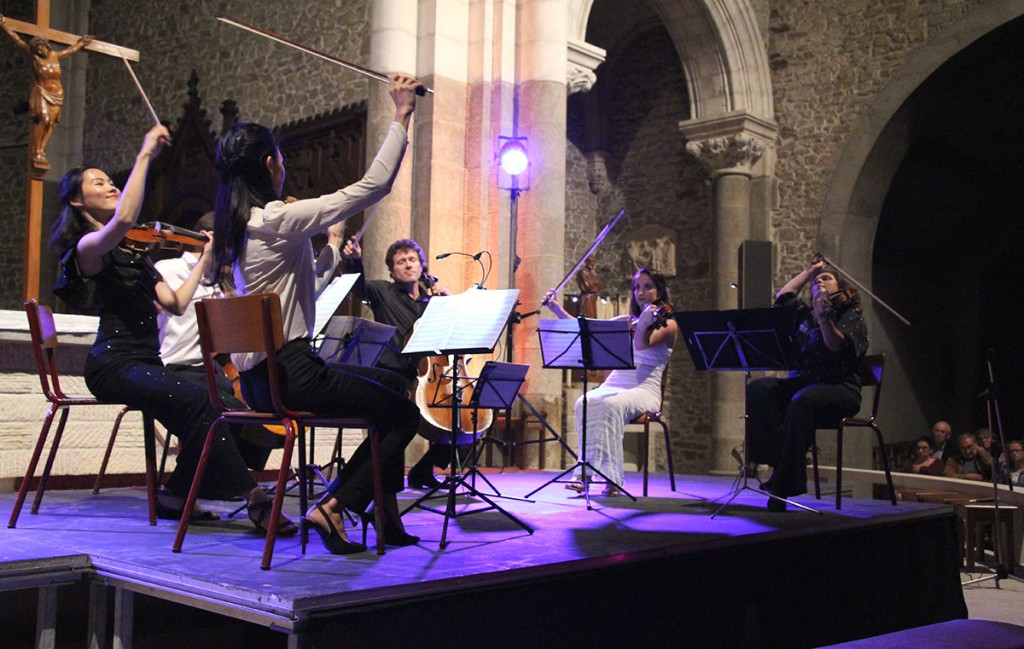 The quartet in performance with cellist François Salque at Église de Pont-Château. 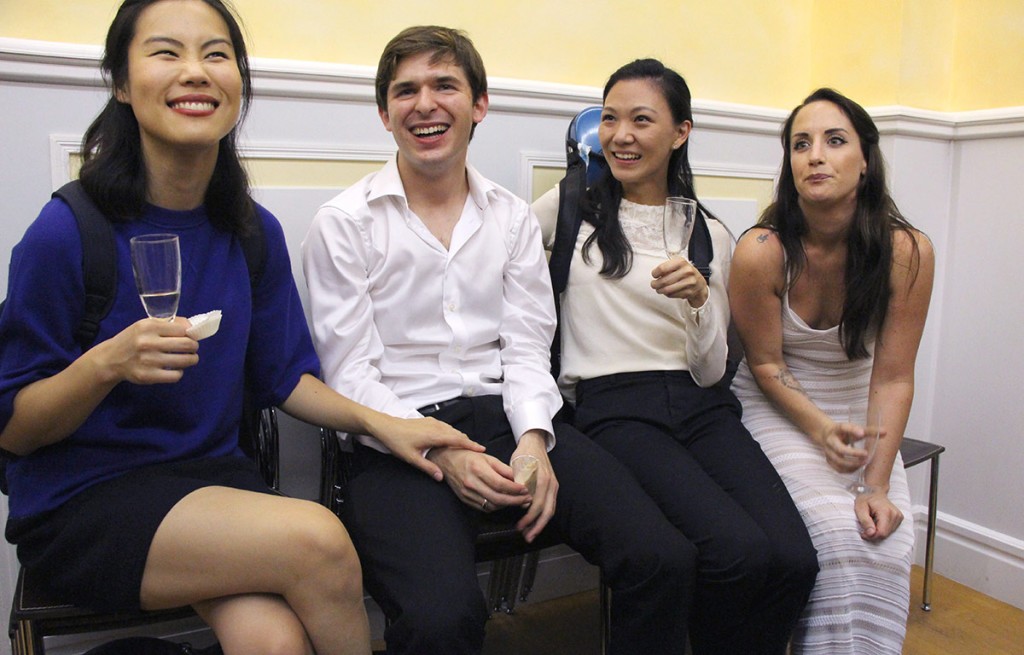 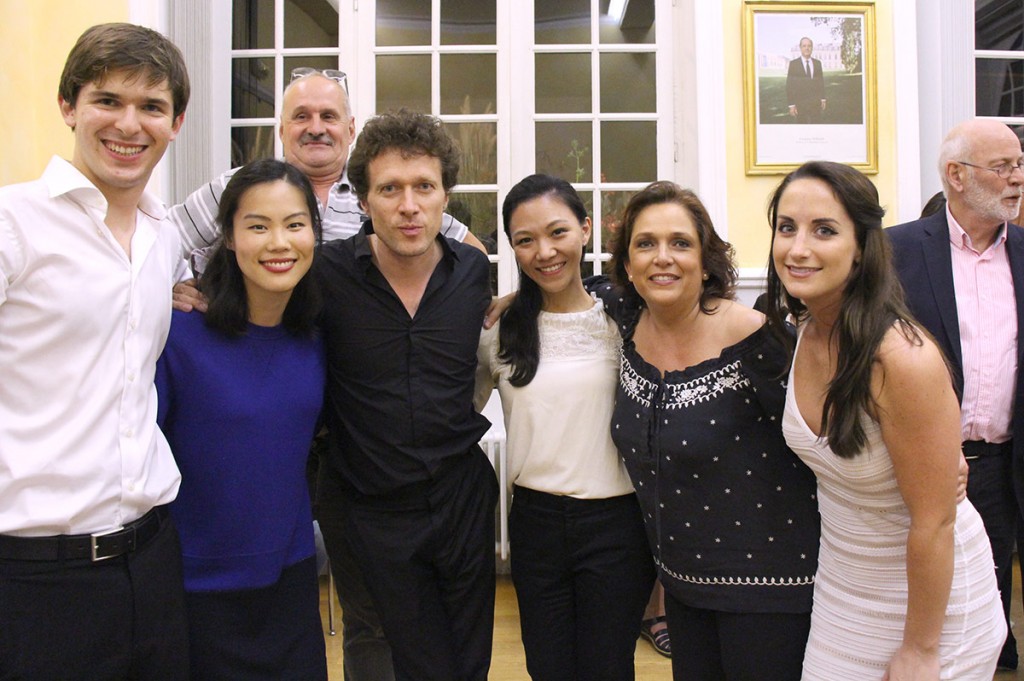 The scenery was inspiring, the venues amazing, but most importantly, the expectations for the performances were extremely professional. When the group arrived in France in August, they had precious little time to rehearse with their French counterparts.

“We got there on a Friday evening, the French arrived on Sunday, and we had our first concert on Tuesday. So it was a quick turnaround,” said Carver. “Having that real-life experience where you have to prepare a performance with just two rehearsals together and you’re expected to be at your very best — I don’t think you get that in school necessarily, but it often is that way in the real world.”

A typical day included several hours of individual practice, at least one rehearsal, and a concert in the evening. “They had a lot to do,” said Carver. “They were playing a tremendous amount.”

Of all the historic venues in the festival, the highlight is the Château de la Bretesche, a castle built over 600 years ago. “The château was beautiful, and there was a gorgeous view of the lake right outside,” said Lash. 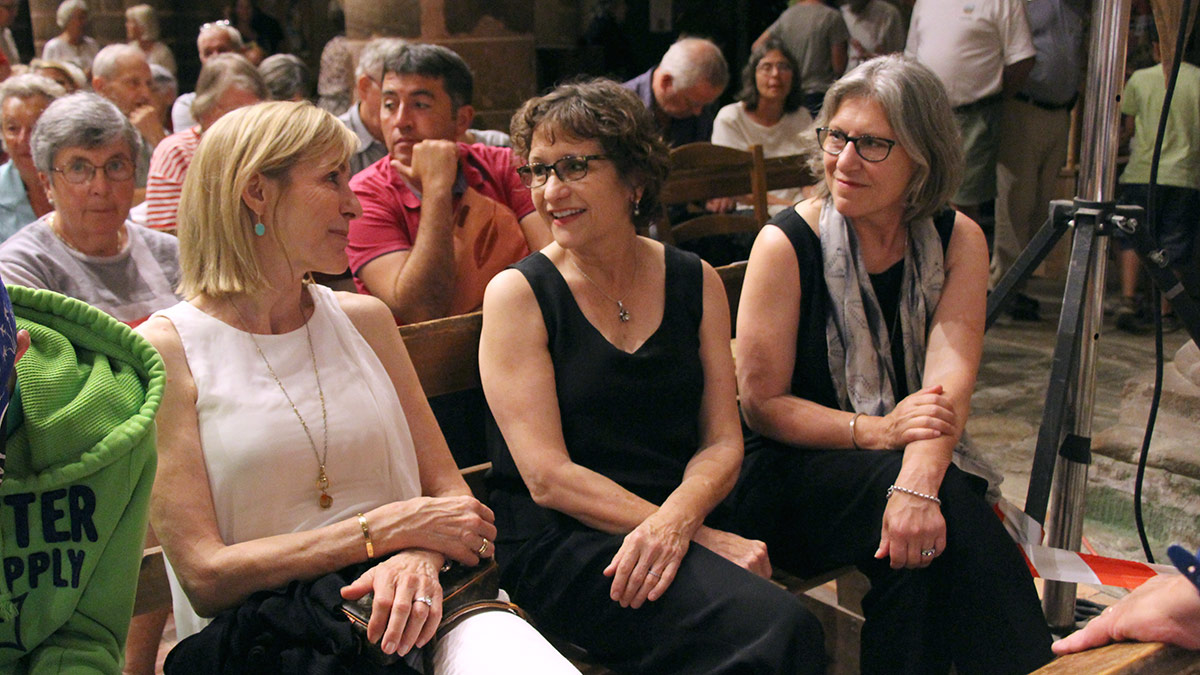 All the musicians stayed together in a manor house where they also shared meals together, which facilitated the cultural exchange. “The French are famous for taking time to enjoy life,” said Carver. “Lunch was an event.”

“We connected really well with the French musicians right off the bat,” said Sobolewski.

“They were all warm and friendly, and also really sensitive to our playing,” said Lash.

With funding from the Albert and Elaine Borchard Foundation and the local Office of Tourism, the festival is one of the most anticipated cultural events in the region. “I did not realize just what a big deal the festival is for these towns,” said Carver. “They look forward to it all year. The concerts were always packed and the audiences were amazing.”

The bonds you develop while performing abroad are one of the many things you bring home. After sharing stages, meals and experiences, the musicians have continued to work with Carver in Los Angeles. Since the festival, the quartet has performed numerous concerts in Los Angeles, Pasadena and Hollywood, including two with Carver who also joined Lash for his DMA recital last month, a formidable colleague to have support him on stage.

“Traveling abroad, experiencing new customs, a foreign language, cuisines and lifestyles can be a bonding experience for any group of people,” Carver said. “Add to that performing six concerts in eight days and you have a very meaningful life adventure.”