A voice that travels

Artists often refer to the process of finding their voice, but for baritone Anthony Moreno, his opera career had an unlikely start – singing in rock clubs like the Whisky a Go Go. Moreno, a current masters student in the Vocal Arts program at the USC Thornton School of Music, originally had his sights set on a career as a teacher and wrestling coach at his Torrance, Calif., high school. A chance encounter with a friend when both were attending El Camino College offered a different career path for the then-math major.

“After my first semester, I ran into a friend of mine from wrestling who said he was starting a band,” Moreno said. “And he told me he wanted me to sing in it.” 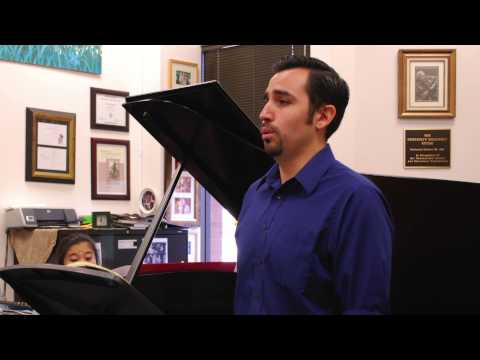 Over the years, Moreno developed a passion for singing that continued after the band’s eventual split.

“As the band broke up, I realized how important music was to me,” he said.

Moreno transferred into the music program at El Camino, where he signed up for vocal lessons, sang in a group choir for the first time, and survived his first audition with only piano as accompaniment. After El Camino, Moreno became a Bob Cole Scholar at California State University of Long Beach and began studying with national and international opera singer Shigemi Matsumoto. For graduate studies, he followed Matsumoto to USC Thornton, where she is a professor in Vocal Arts.

Since enrolling at USC Thornton, Moreno has twice performed with the Downey Symphony Orchestra, where USC Thornton faculty member Sharon Lavery is music director, serving as a narrator in Vivaldi’s Four Seasons and as featured soloist in pieces from Mozart’s The Magic Flute. With the USC Thornton Opera, he has performed in several featured roles, including Ottone in Monteverdi’s L’incoronazione di Poppea and Don Alvaro in Rossini’s Il viaggio a Reims.

In the accompanying audio slideshow, Moreno reflects on his unconventional road to opera.

“When I was graduating high school, I didn’t even think I was going to go to college,” said Moreno. “Through music, I found my voice. Every day here is beyond a blessing.”