In June 2014, USC Thornton School of Music faculty Adam and Rotem Gilbert were recognized with one of the highest honors in early music performance and scholarship — the Thomas Binkley Award. The award, sponsored by Early Music America, is named after the legendary lutenist and educator, and honors outstanding achievement in performance and scholarship in the field of early music education by the director of a university or college ensemble.

Binkley Award recipients are also celebrated for their collaborative efforts with students, both in the classroom and on the performance stage. Both Gilberts are active in the USC Thornton performance scene through Baroque Sinfonia, an early music ensemble led by Adam Gilbert that performs both music and musical plays from the baroque, Renaissance and other periods.

“It’s not only history and it’s not only performance — it’s both,” said Rotem of early music scholarship. “It’s a growth of learning. That’s what we’re constantly trying to convey to our students. We try to be hands-on right away. It’s not just us teaching our students, but our students bringing ideas into the classroom at the same time.” 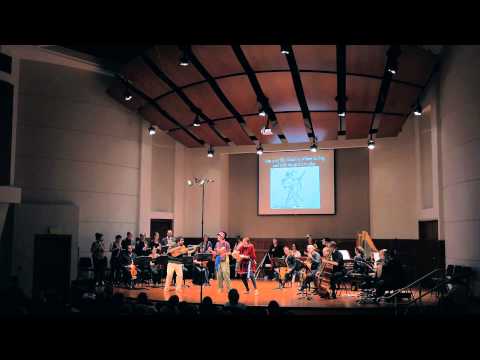 Emphasizing the importance of early music scholarship in the 21st Century is a lifelong aim of the Gilberts. That passion for the art form is wholly present in their respective classrooms, where both encourage students to discover the vitality and beauty of centuries-old songs and compositions.

“One of the main reasons we keep doing this is because we, as a society, have this mistaken notion that music is outdated if it’s old,” said Adam. “When you examine or perform a piece of music, it’s just as present as reading something or having a conversation with somebody. It feels alive.”

For Rotem, understanding how to communicate this experience is critical to her approach to teaching.

“Finding the work, understanding its charm and the little things of how it clicks and then orchestrating it — that’s all part of the skill and the style that students learn here,” Rotem said.

Thanks to online music libraries like the International Music Score Library Project and changing attitudes toward preserving manuscripts, increased accessibility to early music scores has, in the word of the Gilberts, “changed the field dramatically.”

“It used to be that if I was a musicologist and I found a manuscript in a small monastery in Italy, I would hold onto it for twenty years and never share it,” explained Rotem. “But now, you can’t be territorial if it’s available to all. For example, the Vatican is going through and spending millions of dollars in preserving their manuscripts and digitizing them. You’ll be able to see these treasures online – it used to be an opposite ideology.”

The Gilberts take advantage of online resources to enhance USC Thornton students’ ability to understand how these pieces were originally performed. How a piece of Early Music is performed, according to Adam, can affect modern-day interpretations of the work.

“There’s a famous old piece called, ‘Matona, mia cara’ written by Orlando di Lasso, a 16th century composer,” explained Adam. “People used to sing it very seriously. But, at some point, people realized that it was making fun of a German soldier or mercenary singing to a prostitute. The inherent lyrics are very dirty, but it’s actually really clever. So, along this process, we can get closer and closer to a work’s original intent. Suddenly, the song becomes much funnier than it would have been as a very serious, stodgy slow way, or a very goofy way. The more you make contact with a piece of music, the more you realize how clever or moving it can be.”

Both Gilberts agree that the study of early music allows USC Thornton students to develop skills necessary for a complete music education.

“The boundaries have really shifted, and music education is not so clear-cut anymore,” said Rotem. “Early Music gives students more flexibility. All of the musical hierarchies a student is used to are completely blurred. If you give a bass player or a violin player the opportunity to play completely differently, they can only add to their abilities. It will never erase from their abilities.”

“I always think of a quote from Kurt Vonnegut when someone asked him if he believed in life after death and he said something like, ‘Sure, it’s books,’” said Adam. “Studying early music creates that same feeling and the chance to come up with something beautiful.”