Buzz McCoy was born in San Francisco and attended Stanford University, graduating with a degree in economics. He later went on to Harvard Business School, where he received his M.B.A.

McCoy served in Korea in the United States Army, Intelligence Branch, and received the Department of Army Commendation Medal. He began working for Morgan Stanley & Co. Inc. in 1962. He was an owner of the firm for 20 years, and he directed Morgan Stanley’s real estate finance activities for 13 years and its West Coast activities for five years. He retired in 1990, and he presently spends his time as a real estate and business counselor, an educator and a philanthropist.

McCoy teaches courses on business ethics, as well as Christian theology and literature, at graduate business schools as well as churches and seminaries. He has served as executive-in-residence at both the Stanford and University of Notre Dame graduate schools of business; and as adjunct professor at the Pacific School of Religion, the UCLA Anderson School of Management, and the Graduate Real Estate Program at USC. He has published 90 magazine articles on the subjects of business ethics or real estate finance. He has published two books, The Dynamics of Real Estate Capital Markets: A Practitioner’s Perspective (Urban Land Institute, 2006) and Living Into Leadership: A Journey in Ethics (Stanford University Press, 2007).

McCoy serves as a life trustee for the Urban Land Institute and past president of the Urban Land Foundation. He is a past president of the Counselors of Real Estate and a past fellow in the Royal Institute of Chartered Surveyors. He has served on visiting committees for the Harvard University Graduate School of Design and Harvard Memorial Church. At Stanford University he served as president of the Stanford Alumni Association, chairman for the Stanford University Center for Economic Policy Research, member of the Executive Committee of the Hoover Institution and co-chair of their capital campaign, Advisory Council of Stanford Business School and a member of the Board of Stanford Associates. In addition, at Stanford he was awarded the Gold Spike and a 50-year service pin for volunteer activities.

He has actively participated in many other organizations, serving as member of the Board of Directors, Y.M.C.A. of Downtown Los Angeles; trustee, Pacific School of Religion; major gifts chairman, Harvard Business School 25th Class Reunion; member of Finance Committee, The Board of Pensions, United Presbyterian Church; member of the Advisory Committee, Appalachian Mountain Club; member of Executive Committee, Trinity Church Center for Ethics and Corporate Policy in New York; and ruling elder, The First Presbyterian Church of Greenwich, Connecticut.

He has funded a campus-wide ethics center at Stanford University and a fellowship in ethics at Harvard Business School.

He has trekked 1,000 miles in the Himalayas and completed the New York Marathon in 1977.

McCoy and his wife Barbara have six children and six grandchildren. They spend as much time as they can at their hiking ranch in Topanga, in the Santa Monica Mountains. 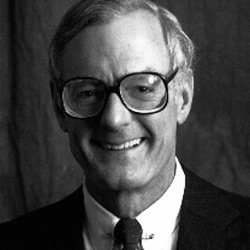