Daniel Vanchieri is a drummer and sound designer based in Los Angeles, CA. He is interested in the translation of a clean, visual aesthetic as it relates to a musical context. In addition to his extensive study of contemporary music at the USC Thornton School of Music, he has has also studied digital photography, illustration, graphic design, and conceptual intermedia installation — designing soundscapes that ultimately supplement and enhance the viewing experience.

He has toured and performed with acts such as DWNTWN, Jhameel, and Pachino, playing venues nationwide such as the Troubadour, The Observatory, Glasslands, and Santo’s Party House.

Daniel believes that a positive mental attitude facilitates internal happiness, a distinguished work ethic cultivates self fulfillment, and that nature lends itself to humility and a greater perspective and understanding. He is appreciative of the opportunities he has been given, and eagerly awaits what lies ahead. 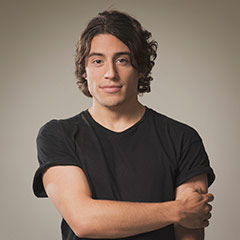