When David Allen Moore, a USC Thornton alumnus and faculty member in the Strings department, needed a piece to perform with his colleagues in the bass section of the Los Angeles Philharmonic, he knew he didn’t have to look far. The perfect piece, he thought, could be found in the hallways of USC.

“There are not a lot of great original works for bass quartet,” Moore explained. “Not only are there not a lot of works written for that combination, they’re not written by mainstream composers of other repertoire. I thought it would be great to approach one of Thornton’s faculty composers and see about writing a piece specifically for a chamber music program.”

That search led Moore to composer Veronika Krausas, an associate professor at Thornton.

“We literally ran into each other in the stairwell,” he recalled. “I asked her what she thought about the idea, and we both got excited about it.”

From this chance collaboration emerged sillages – a work that will see its official premiere during an installment of the Philharmonic’s chamber music series on January 14.

“I’ve been lucky that I know a lot of bass players who often ask me to write bass music,” said Krausas. “I absolutely love the double bass because it is such a big teddy bear of an instrument, and it has a wide range that can produce anything from a whisp of color to music that is almost more of a feeling than a sound.”

The title of the piece comes from a French word that, translated literally, means “wake” or “trail” – but, according to Krausas, the word is most often used to describe the effect of a scent lingering in the air.

“I heard the term at a perfume workshop, of all things,” she said, “and fell in love with the word before I knew what it meant.” 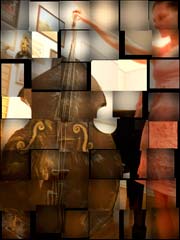 Inspired by the elegance the term evoked, Krausas immediately knew it would make the perfect title for Moore’s bass quartet piece. As she explains in her notes accompanying sillages, the large, loud double basses provide a wonderful contrast to the word’s delicate nature.

“I typically write things that involve some kind of visual element – a dancer, a singer, an acrobat,” Krausas said. “For me, my attempt was to do something that was purely an instrumental piece that stands on its own without any external paraphernalia.”

For Moore, Krausas’ enthusiasm for the project made the collaborative process especially fulfilling.

“To have someone who was approaching it from a purely musical perspective and that being the pallet to work from is really exciting,” he shared.

That excitement, according to both Moore and Krausas, is indicative of the long-established culture of camaraderie amongst Thornton faculty.

“Thornton does foster an environment in which professors can actually collaborate on a number of projects,” Krausas explained. “People are completely fascinated with combining and using the talent that’s available at the school.”

sillages will be performed January 14 alongside works by Beethoven, Bartok and Poulenc at Walt Disney Concert Hall as a part of the Philharmonic’s Chamber Music Society program. For more information, click here.

“I thought it would be great to approach one of Thornton’s faculty composers and see about writing a piece specifically for a chamber music program.”