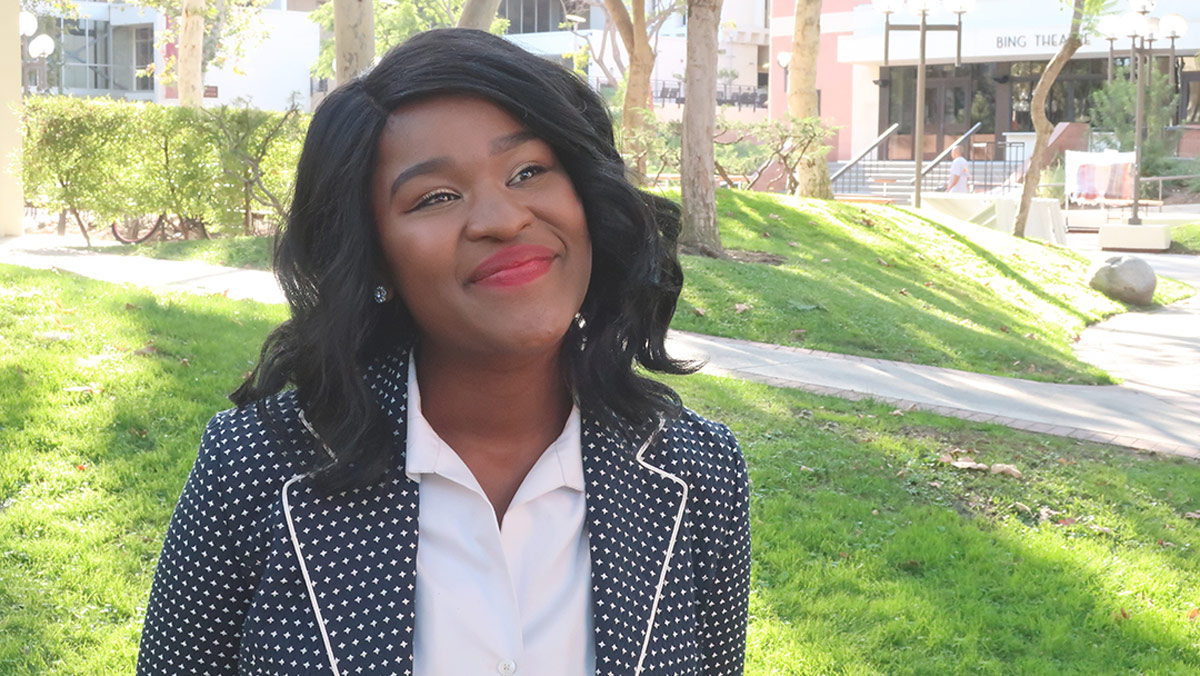 Tell us a little bit about where you were before you got here. How did you end up at USC?
I’m originally from Houston, Texas, and I did my undergrad at Boston University. I love Boston. It’s a beautiful place. I really enjoyed that there were seasons and that is snowed. So I applied to Boston University early decision and moved there before ever visiting.

Now, [going to school in Los Angeles] has been really interesting. I feel like part of why I wanted to live here was because I experienced a very harsh winter in Boston that they called “Snowmaggedon.” School was canceled for about a week and a half, I was sick all the time, I could never feel my toes, the train would often break down, and I slipped on the ice and broke my hand. After that I was like “I’m done.” I decided I wanted some sun.

What has been your experience as a new Trojan?
I think the alumni connection at USC is really interesting. I’ve seen its effects and I have only been going to school here for two months. A simple “#USC” and you get all of these people that say “Oh I graduated from USC in ’86!” I think that kind of school spirit and camaraderie wasn’t really there at Boston University. It definitely makes me a little bit more excited to go to campus, and even though I’m not a sports person, I like seeing people excited about things.

When I first decided to come here, I was doing some more research and I found out that Angela Meade, Martin Katz, and all these amazing people were alumni. I think I posted something on Instagram [about USC] and somehow a bunch of people reached out to me that were from all different majors or graduated, from all different years. 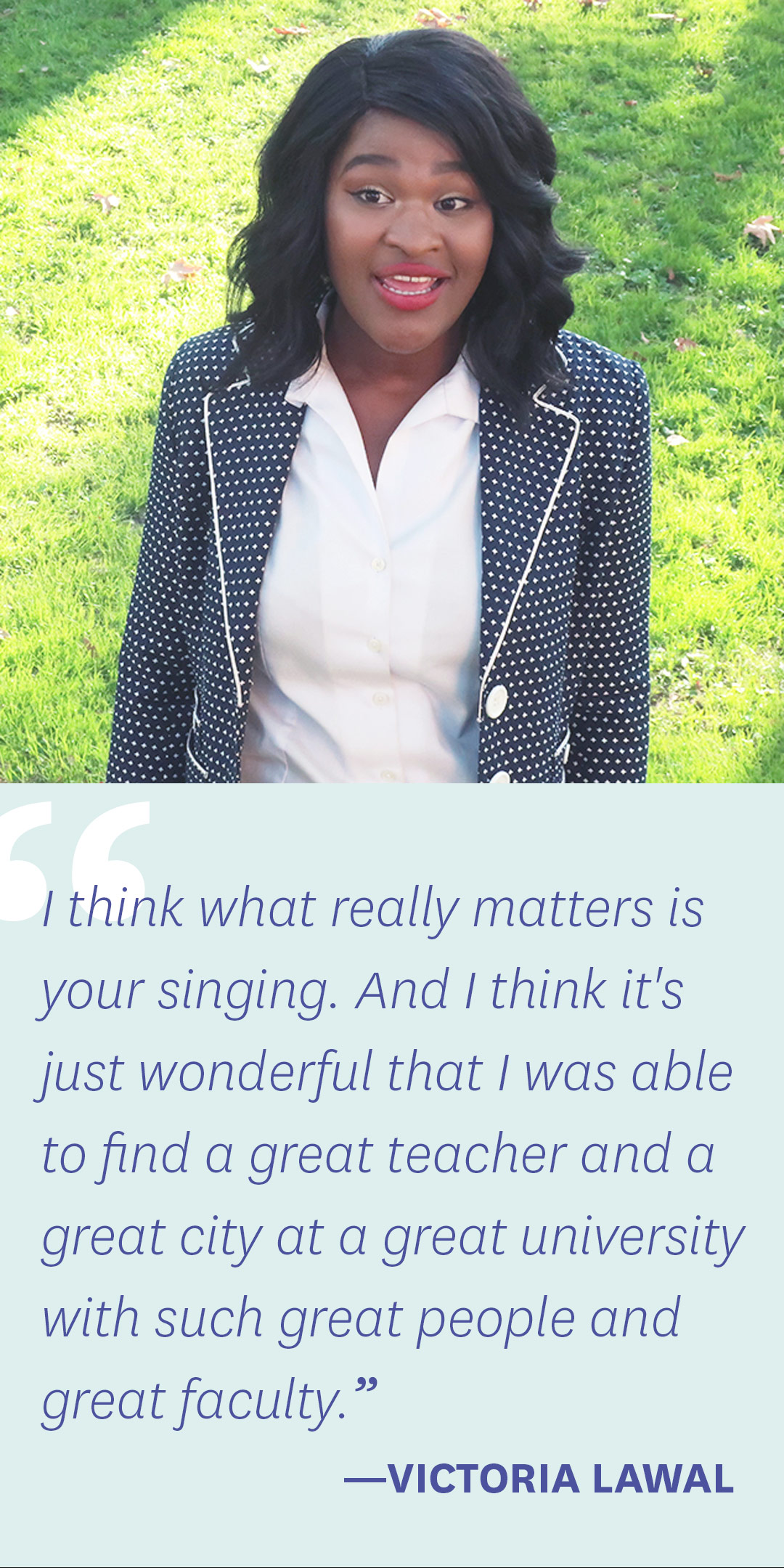 What has been your experience with USC Opera so far this semester?
I am performing in both of the French operas we’re doing in the double bill. In Le Rossignol I am singing in the chorus, and in L’Enfant et les Sortilèges I am singing the roles of the Owl and the Shepherdess.

I think the energy of music rehearsals is really interesting. USC is so wonderful at providing opportunities for undergrads, so I think getting a mix of people that are out in the professional world and people that are just starting out, in one rehearsal room, trying to work together, is really interesting and exciting. I also love the music that we’re doing, so I was just super excited to get started, especially on the Ravel. It’s one of my favorite operas.

[Staging rehearsals] have been wonderful. I think director Ken [Cazan]’s ability to think on his feet and his willingness to try something else if something seems like it’s not working is really nice. [As far as playing an owl goes], we have this really great puppeteer that will be building puppets for us and so we’re going to have these great big giant puppets as we’re singing. We haven’t gotten to that part of staging yet, so it’ll be interesting to see everything come together when the props arrive.

What is the universal concept or moral of these operas to you?
I think on the whole I really love stories like these that are so innocent, but carry such a deep universal meaning. I think the concept that Ken is trying to go with is that moment in your life when you realize that you have an impact on your surroundings. And I think for L’Enfant, it’s after he’s destroying the wallpaper that seems like it’s just wallpaper, then I, as the Shepherdess, who’s part of that wallpaper am now separated from the shepherd, I’m separated from my sheep and I’m living a sad life. You know, it’s not Trovatore, it’s not that level drama, but these kind of small instances really tend to build us as people.

Now that you are here, what have you liked the most?
Professor Elizabeth Hynes. I had had a lesson with her before deciding to come to USC. I think when you have the opportunity to work with people that have so much experience doing exactly what you hope to do, you should really take it. It has been absolutely wonderful. She is very similar to my previous voice teacher, Ms. Penelope Bitzas, and I greatly enjoy that because everything is a continuation on what I had been previously doing and I think that’s really important.

A lot of people choose their grad school based on the name of the university or the “reputation” that they believe it currently has. I think what really matters is your singing. And I think it’s just wonderful that I was able to find a great teacher and a great city at a great university with such great people and great faculty, from my cantata class, to my Italian diction teacher, to my acting teacher, who is also our director, who has directed everywhere, and I just think the melding of amazing talented people that have had these experiences that way as young singers could only dream of is just amazing.

This interview has been edited for length and clarity.