Home Is Where the Music Is From his dorm on the USC campus, Robert Wang records his parts for virtual ensembles with the Classical Guitar program and the Baroque Sinfonia.

Robert Wang toughs out the pandemic on a deserted campus — with his instruments for company.

Robert Wang (BM ’23) admits he sometimes gets lonely. When the USC campus closed in March in the wake of COVID-19, almost all the students went home. Not Wang. Rather than return to his family in Canada, the 20-year-old Classical Guitar major decided to stay in the dorm. His only company has been his guitar and four early music instruments.

As an international student at the USC Thornton School of Music, Wang faced a dilemma last spring: Pack up everything in his dorm room, put it in storage, and go home — and then face the possibility of not being able to re-enter the United States if classes returned to in-person instruction. Or stay on a mostly deserted campus and continue his studies on Zoom — with no friends nearby, no driver’s license and stay-at-home orders in effect.

One perk tipped the scales to staying on campus. Wang would be able to keep the USC instruments he had on loan from the Early Music department — a Renaissance lute, a Baroque lute, a Baroque guitar and a theorbo. 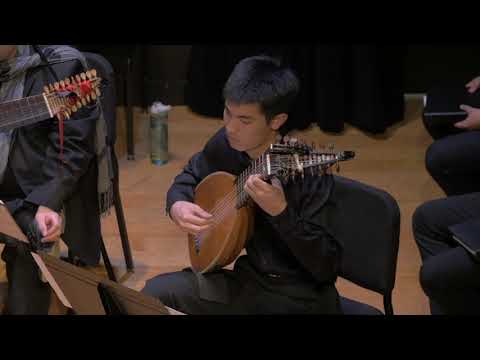 “If I were to go home,” he said, “I would definitely not be allowed to take all those instruments with me. I can’t even carry them all at once.

“Plus, the theorbo is probably one of the worst carry-on items for air travel,” he joked of the six-foot instrument.

Rather than a sacrifice, Wang thinks of his quiet months on campus as a special opportunity to spend more time on what he loves most: music.

“I’m actually pretty happy that I stayed,” he said in December, after a grueling schedule of finals and right before the holidays. “Even if it weren’t COVID, I wouldn’t have gone home to Canada for the whole summer, just to keep the instruments around a little while longer.”

The Essence of Resilience

While Wang seems to take the strange semester in stride, his professors have been impressed with his focus and discipline.

“Robert is a true Renaissance scholar, a polymath with deep interests in philosophy, technology, and of course, music, ranging from the ancient to the contemporary,” said Classical Guitar faculty member William Kanengiser. 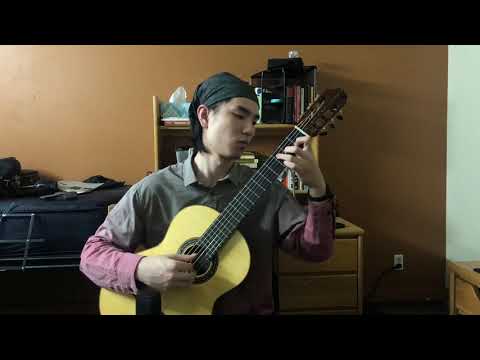 “I think that Robert truly represents the essence of resilience and excellence this year,” added Early Music and Musicology faculty member Rotem Gilbert.

Gilbert knows Wang as the youngest member of the Baroque Sinfonia, Thornton’s flagship early music ensemble, and one of the strongest students in her graduate Medici Florence class in the fall.

“Campus is the quietest place on Earth right now,” Gilbert said. “He came to school to be with tens of thousands of kids and ended up by himself, but he always has a smile and doesn’t quit.” During each class, Gilbert asked Wang to point his laptop out the window and show everyone what the campus looked like. For his part, Wang appreciated how Gilbert had set up a class meeting before the semester started for everyone to get to know each other.

Like Gilbert, other faculty are trying hard to encourage socializing and relationships, which has definitely helped students like Wang. “The Classical Guitar department has a group chat going, which has been nice in these times!” he said. “[Professors] Bill Kanengiser and Scott Tennant organize meetings for the guitar department to make sure everybody is doing well and catching up.”

Wang signed up for Gilbert’s graduate course because of his strong interest in music of the Renaissance and Baroque periods, and he will be taking another with her in the spring. That passion was sparked by his lute lessons with Early Music faculty member Jason Yoshida (MM’09, DMA’14) during his first semester at Thornton.

“Towards the end of my freshman year, I started learning and playing basso continuo, which is one of the most important skills to acquire as a plucked string instrument player,” Wang said. “This allowed me to be involved more frequently in Thornton’s early music ensembles as a continuo player.” Of his graduate course, he said, “I gained significant insight into essentially the history of the instruments I am playing, on top of the rich historical contextualization that would improve my interpretation in Renaissance and Baroque music as a performer.”

The course undoubtedly informed his performances with the Baroque Sinfonia. Wang performed with the ensemble and with the Classical Guitar department in the Fall 2020 Festival. It’s an unusual feat to represent two departments.

“That was one of the perks of being stuck in the dorm,” he said. Rehearsals for the Baroque Sinfonia used to overlap with a guitar class. “It was a 10-minute skateboard from Gateway to Ramo, and I would have had to change instruments. I could never have done both ensembles at the same time if it weren’t for COVID.”

“The Baroque Sinfonia is mainly a graduate ensemble,” Gilbert said, “but Robert is so dedicated and quick, he’s been able to contribute so much. He’s a go-getter.”

All of the Fall 2020 Festival performances were pre-recorded. “Most of the performances for the Classical Guitar and Early Music departments involved at least one other musician,” Wang said, “and they were synced seamlessly thanks to Prof. Bill Kanengiser and Prof. Jason Yoshida in post-production.”

Recording and editing are skills that all musicians had to get up to speed on because of the pandemic. Wang started learning about music technology last spring. He fulfilled some Contemporary Music Division credits with courses on Logic and ProTools, and he branched out on his own. “Since the beginning of lockdown, I have been learning other DAWs like Ableton and Cubase out of interest, in addition to editing software like Premiere Pro and DaVinci Resolve for syncing my performances at the end.” Wang and his peers in the Classical Guitar program performed in virtual ensembles for their Fall 2020 Festival concert.

“I was exploring the software to see which was better for recording or audio editing,” he added. Since he had made friends with his Music Production suitemates freshman year, he would text them questions.

“I wasn’t really into this before,” he said, “but now I feel like knowing the basics of this software is definitely a valuable skill, even for a classical musician.”

Of course, the lack of live performance opportunities has been the most difficult part of these past several months. “Since COVID, I’ve actually never played with anybody else in the same room,” he said. “It’s definitely hard. I prefer live performance, and I miss it.”

Still, he looks on the bright side. “Recording requires more detail work,” he said. “I’m more focused on getting all the notes and details right. When I’m recording, I have more chance of nailing every single movement versus live performance where I only have one chance to do it.”

“Despite his young age, Robert has tackled some of the most challenging classical guitar works in the repertory, and his rapid mastery of period instruments from the Renaissance and Baroque has been nothing short of astonishing,” said Kanengiser. “Most impressive of all is seeing how Robert’s profound love of learning has kept him positive and focusing under the most trying of circumstances. It’s an honor and an inspiration for us to guide him on his noble path of knowledge.”

On top of his seven classes this fall, Wang has been working on a musicology research project with Joanna Demers, Vice Dean of the Division of Research and Scholarly Studies, as part of a fellowship he won. It’s on Scriabin’s composition, “The Poem of Ecstasy,” which he is connecting with philosophers like Hegel and Nietzsche. His work started in the summer and will wrap up this spring.

But Wang was looking forward to relaxing a bit over the holiday break. “I’ll probably watch some Christmas movies,” he said. “And I was hoping I could finish reading ‘War and Peace.’ But that’s just a side project, so I don’t have to finish it.”