A native of Pasadena, California, James Hopkins received a bachelor of music degree from the USC Thornton School of Music, a master’s of music from Yale and a doctoral degree from Princeton. Prior to returning to teach at his alma mater in l97l, he served on the faculty at Northwestern University. He studied composition with Halsey Stevens, Quincy Porter and Edward T. Cone. Dr. Hopkins, an associate of the American Guild of Organists, has also studied organ with Irene Robertson and Frank Bozyan. He retired as organist at the First United Methodist Church, Pasadena, in 2003 after serving there for 24 years.

Hopkins’ compositions include seven symphonies, four concertos (one each for two pianos, contrabass, organ and piano and violin) and several other large-scale works for orchestra, as well as many choral, solo instrumental and chamber pieces. He has received major commissions from the National Endowment for the Arts, the Pasadena Chamber Orchestra, the University of Southern California and the Orange County Philharmonic Society, as well as from numerous churches and educational institutions. His Concierto de Los Angeles, commissioned for the 2004 National Convention of the American Guild of Organists, was the first organ work heard in concert on the Walt Disney Concert Hall organ.

In 1989, his Fantasy on ‘Cortège et Litanie’ of Marcel Dupré won first prize in the international composition contest sponsored by the Los Angeles Chapter of the American Guild of Organists. Hopkins won the 1990 AGO/Möller Prize in Choral Composition for The Peace Which Passeth Understanding and a fellowship from the California Arts Council for 1991. He was named winner of the AGO-ECS Award in Choral Composition in 1992 for his Welcome All Wonders. In 1995, he received USC Thornton’s Ramo Music Faculty Award for his “outstanding contribution to music and education.” Hopkins was composer-in-residence for the Pacific Chorale from 1996-1998. 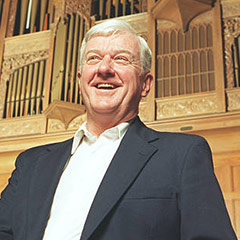