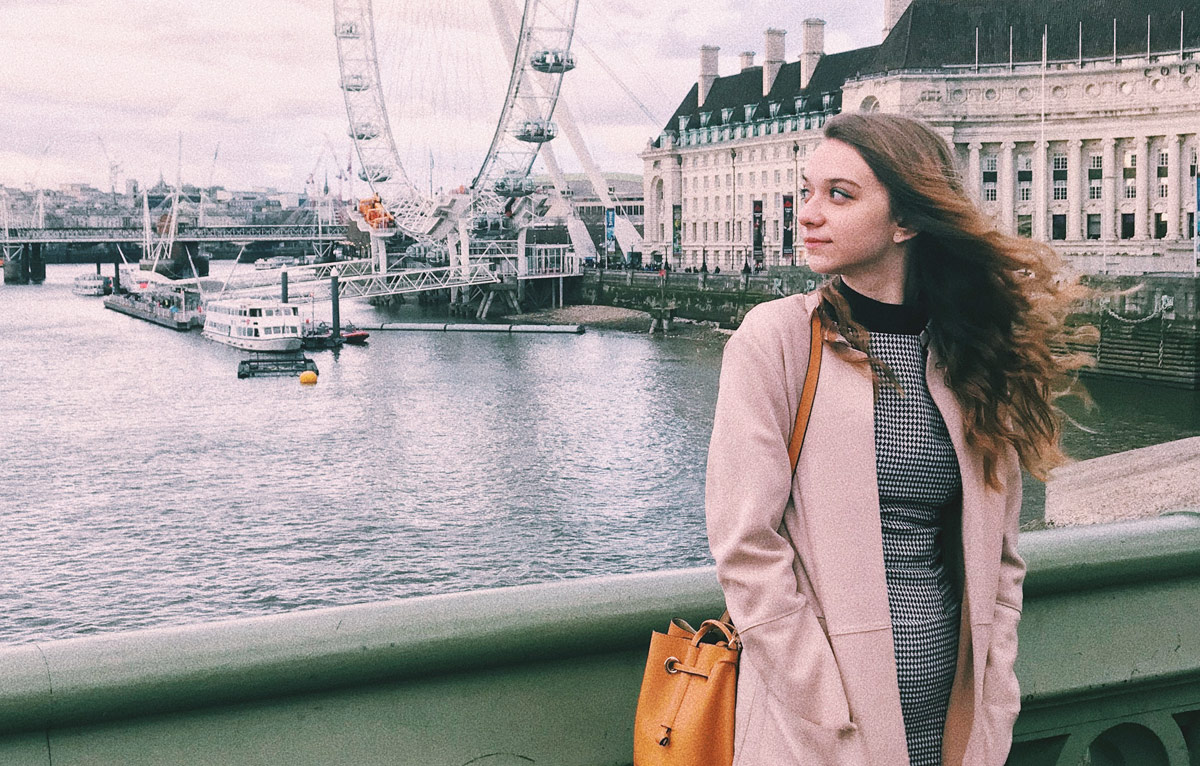 Last month, Katya Richardson made her London debut with Piggy in the Middle, a commission composed for British choreographer Charlotte Edmonds and the Royal Ballet.

That’s pretty remarkable for two reasons. First, because Richardson is still in college.

And second, because she and Edmonds met for the very first time just hours before the premiere, which took place at the storied Royal Opera House on March 29. Richardson had flown in for the debut.

“It was so strange,” she says, with a dry laugh. “Charlotte and I had been Skyping for months but hadn’t actually met until that point.”

Such a thing couldn’t have happened in the days of Tchaikovsky and Pepita, but it’s perfectly feasible today as digital platforms make cross-continental artistic collaborations a snap, and as tech-empowered millennials shape their own careers. 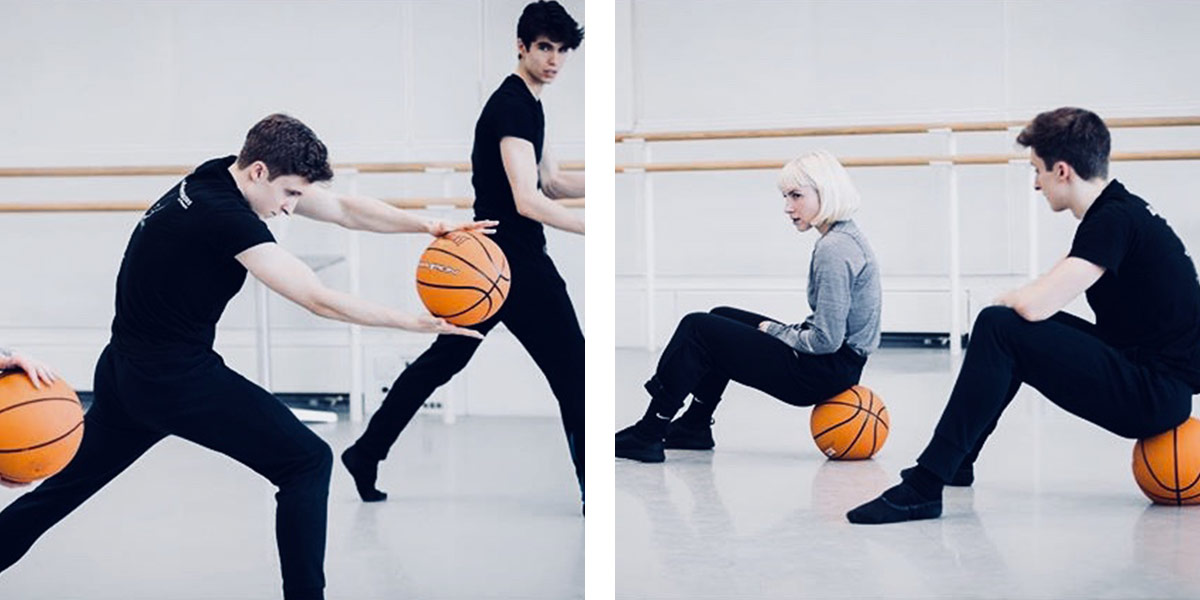 Scenes from Charlotte Edmonds’ Piggy in the Middle in rehearsal at the Royal Opera. (Photo courtesy of Richardson)

Richardson is a Composition major from Irvine, California, in her junior year at USC Thornton. Edmonds is a young choreographer-in-residence at the Royal Ballet. Both artists are 21.

They met online. A mutual friend, USC cinema student Kiersten Friesen, made the introductions via email after Edmonds, who is also an experimental filmmaker, had mentioned that she was looking to commission new music for her next dance project, a 10-minute piece inspired by choreographer Kenneth MacMillan’s 1972 ballet, Triad.

Edmonds visited Richardson’s SoundCloud channel, listened and liked what she heard, and offered her the commission in August. Over the next two months, the two worked seamlessly across the pond, meeting regularly via Skype.

Piggy in the Middle is only Richardson’s second foray into scoring for dance. The first had come just months earlier, when she had participated in USC’s inaugural Choreographers & Composers concert.

The joint initiative between Thornton and the USC Kaufman School of Dance is a new sophomore-year requirement for all composition and choreography majors. Last year’s program culminated in two nights of original dance pieces set to new music—jointly created by 33 student choreographer-dancers and seven student composers. The collaborative’s 2018 installment yielded another set of hybrid performance pieces.

It was Richardson’s FeelLove—composed for Kaufman dancers—that grabbed Edmonds’ attention on SoundCloud. With a spare musical palette of solo piano, strings, reversed piano and her own untrained singing voice, Richardson managed to construct a fragile, vulnerable space that spoke to the choreographer.

Indeed, Edmonds liked the piece so much that Richardson ended up borrowing from herself—recycling and fine-tuning sections of her earlier ballet score to construct Piggy in the Middle.

The ballet explores the intensity of adolescent relationships, love and identity. Edmonds’ piece—the title refers the children’s game also known as Keep Away—takes place on a basketball court. A pair of boys play a two-man game. A girl’s arrival interrupts and slowly fractures the friendship. In Richardson’s score, what begins as the steady beat of a dribbled basketball returns, in the finale, as the excluded boy’s thumping heart. 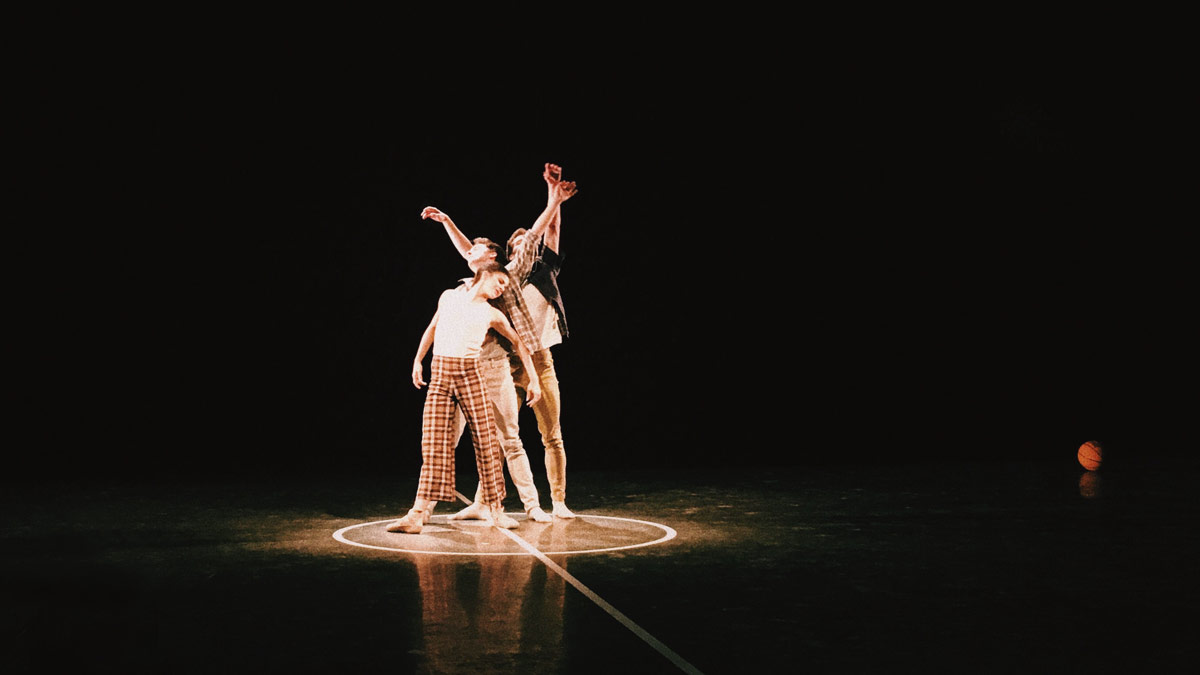 A scene from Piggy in the Middle at the Royal Opera House. (Photo courtesy of Richardson)

Though Richardson had little prior experience composing for dance, she felt on familiar ground working with Edmonds. “I do a lot of film scoring, which is a similar mindset,” she says. “Dance is also a visual form. I just love how motion interacts with music.”

It helped that Richardson had plenty of prior experience as a dancer. She was a serious ballet student till the age of 14, and might still be on pointe if music hadn’t called so strongly.

The multi-talented Richardson started playing piano at 8. Her father is a professional jazz trumpeter, and her mother is a Russian/Ukrainian interpreter and translator. Richardson is herself fluent in Russian.

Her gift for composition appeared early: Richardson had a habit of improvising around her mistakes during piano practice. After years of competing and winning regional and national piano competitions, she picked up jazz piano and formally studied composition at the Orange County School of the Arts, a conservatory-style charter school.

In 2011, Richardson was one of four Southland teens to win young composers fellowship with the Los Angeles Philharmonic. The two-year mentorship brought her in close contact with Steven Stucky, Esa-Pekka Salonen, James Matheson and Gustavo Dudamel. The LA Phil went on to premiere three of Richardson’s orchestral works at Disney Concert Hall and the Hollywood Bowl. In 2015, her freshman year at USC, she won the National YoungArts Foundation’s prize in classical composition.

A Trustee Scholar attending USC Thornton on a full-ride merit scholarship, Richardson has since studied with composition faculty Sean Friar, Frank Ticheli and Ted Hearne. All three have influenced her creatively, but Hearne stands out as a role model.

“His music is probably the closest to what I’m interested in,” she says. Hearne composes “not so much concert pieces as productions. They’re politically charged. They have visuals and electronics. And he collaborates with a lot of different media.”

There’s a pop-side to Richardson’s craft. Last year Richardson got to meet and work with Ryan Lott, leader of the experimental band Son Lux. The L.A.-based producer-performance artist is married to USC Kaufman faculty artist Jennifer Lott and, through her, he participated in last year’s composer-choreographer collaborative coaching the student-composers.

Experiences like these are the basis for Richardson’s claim that “musically, USC is the best place to be. It’s so close to every up-and-coming thing happening in music—whether it be in film, dance or at the Phil.” 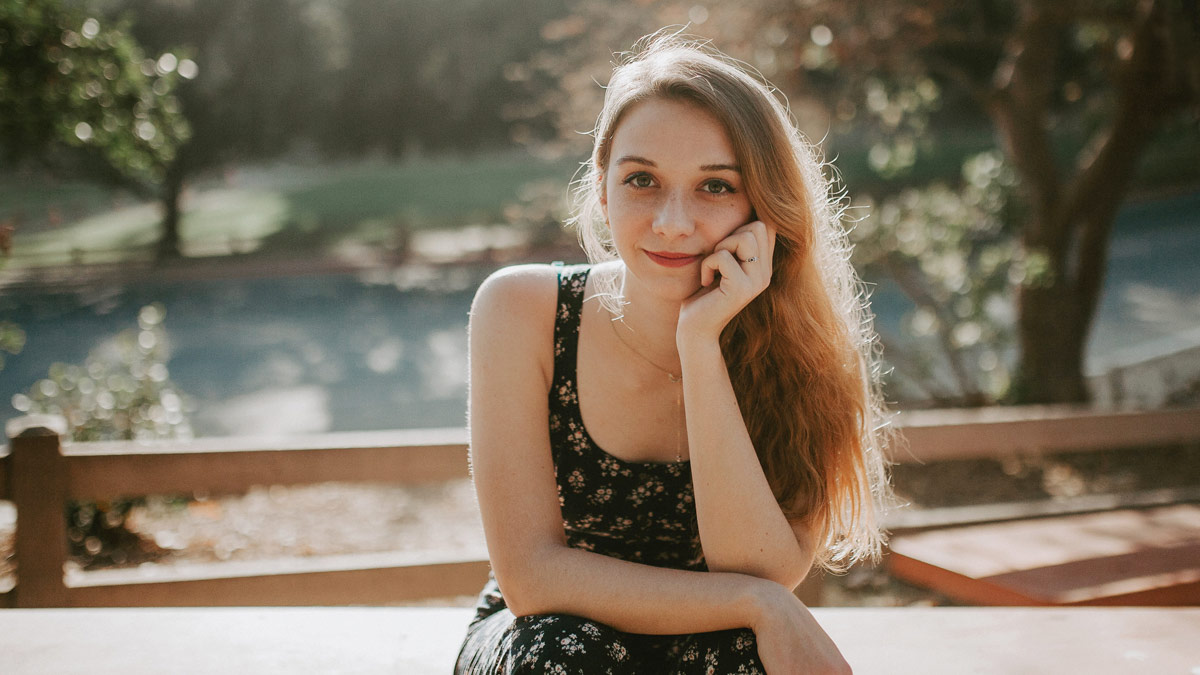 Writing for the Screen

Richardson looks forward to more dance collaborations in the future. “I had five dancers in my Kaufman piece, and I’m still close with all of them,” she says.

But for now, Richardson is primarily focused on composing for movies and games. On top of her music Composition major, she is pursuing a minor in game audio through the USC School of Cinematic Arts.

“I’ve had to take a few coding classes in order to appreciate the game-building process. That has been an interesting ride,” she says. In other hands-on learning experiences, she interns for Hollywood composer Craig Wedren, works in the film school’s library, and writes occasional arts stories for USC Thornton’s web feed.

Recently, Richardson formed a band with fellow Thornton Composition major Logan Nelson. Billing itself as “cinematic indie synth-pop,” Lighthouse the Duo has published two original songs, with two more due for release in the summer. A full album is in the works. Nelson and Richardson share composer-producer credits, and Richardson provides all the vocals. She has yet to take voice lessons, though not for lack of opportunity. As a composer, however, she deliberately taps into her own insecurity to achieve a certain effect.

“It’s always a fear I’ve had—my own singing voice. So I’ve been incorporating it slowly into my film scores, and there has been a demand for that, surprisingly,” she says.

“I think it’s very important for composers to collaborate with artists in other mediums,” she says. “I’ve learned over my time at USC, that’s really where you find yourself and what your personal statement is. I’m still figuring out exactly what mine is through the music I’m writing.”

One thing she knows for sure — and it’s a commitment she shares with Edmonds, who could have hired a more experienced dance composer had she chosen to — is the need for young artists to band together.

“There’s something happening with the younger generation,” Richardson says. “Charlotte is relatively young. Working with new musicians and younger people, I think, is personally very important to her. This new wave of collaboration is important.”