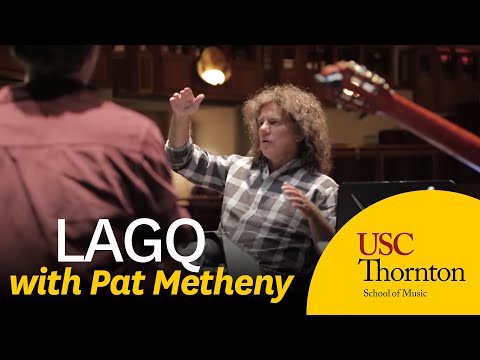 Glacier National Park in Montana’s Rocky Mountains features a majestic road that traverses the park and crosses the Continental Divide. The “Going-to-the-Sun Road,” completed in 1932, has inspired visitors for generations, among them famed jazz guitarist Pat Metheny — who drove the road the day after hearing the Los Angeles Guitar Quartet for the first time.

“We had recorded Metheny’s Letter From Home, on our album Guitar Heroes which won a GRAMMY,” said Bill Kanengiser, USC Thornton faculty member and LAGQ member. “As Metheny describes it, he heard us perform at the Crown of the Continent Guitar Workshop & Festival in Montana a few years back. The next day, while on a drive through Glacier National Park, he decided to write a piece for us.”

Kanengiser and the other members of the celebrated quartet, who formed while classical guitar students at USC, expected an eight-minute piece. What they got is a masterful four-guitar opus, Road to the Sun, that clocks in at nearly half an hour, taking the players and the audience on a spell-binding journey through Metheny’s musical landscape. They premiered it on Oct. 20, 2016 in a performance at the University of Denver with the composer in attendance and went on to perform it again in Santa Barbara and New York. 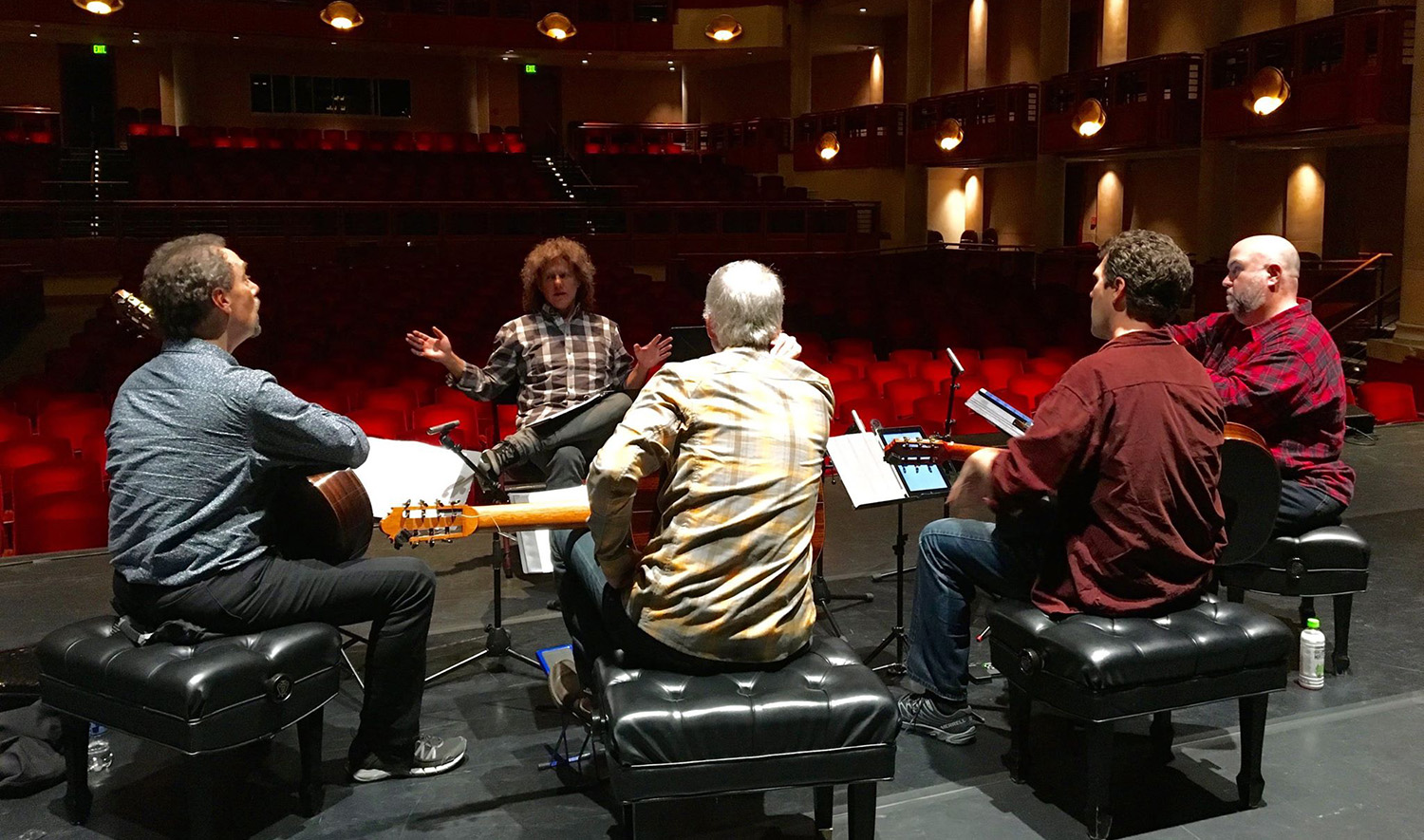 Pat Metheny (center) preparing for the Denver debut of “Road to the Sun.” (Photo courtesy of LAGQ)

“Road to the Sun is one of the most important new works in the guitar quartet repertoire,” said Kanengiser. “Its sheer dimensions are impressive: a 25-minute, six-movement suite with an almost symphonic use of color, mood contrast and thematic unity. But it also captures a very personal emotional expression from Pat Metheny, running the gamut from jazz grooves to haunting atmospheric harmonies, from freely improvised sound effects to luscious melodies.”

In addition to Kanengiser, the GRAMMY Award-winning LAGQ consists of John Dearman, Thornton alumnus Matthew Greif, and Thornton faculty Scott Tennant. The group was excited to premiere a work by Metheny because his long and varied career has been an inspiration.

“I have admired and enjoyed Pat’s music since my college days, but I must say I am blown away by this new composition every time we play it,” said Tennant. “Such beautiful melodic and harmonic flow. Although his fans will recognize it as undeniably Metheny, he develops his thematic material so skillfully that the average concert-goer will get lost in his world.”

Because he knew the specific strengths and interests of each member of the LAGQ, Metheny did not merely write a four-part piece and hand it over to the quartet. Rather, he composed each of the individual parts of the piece for a specific member of the LAGQ. So instead of labeling the parts by number — such as Guitar 1, 2, 3, and 4 — Metheny labeled the parts by the players’ first names: Bill, John, Matt, and Scott. 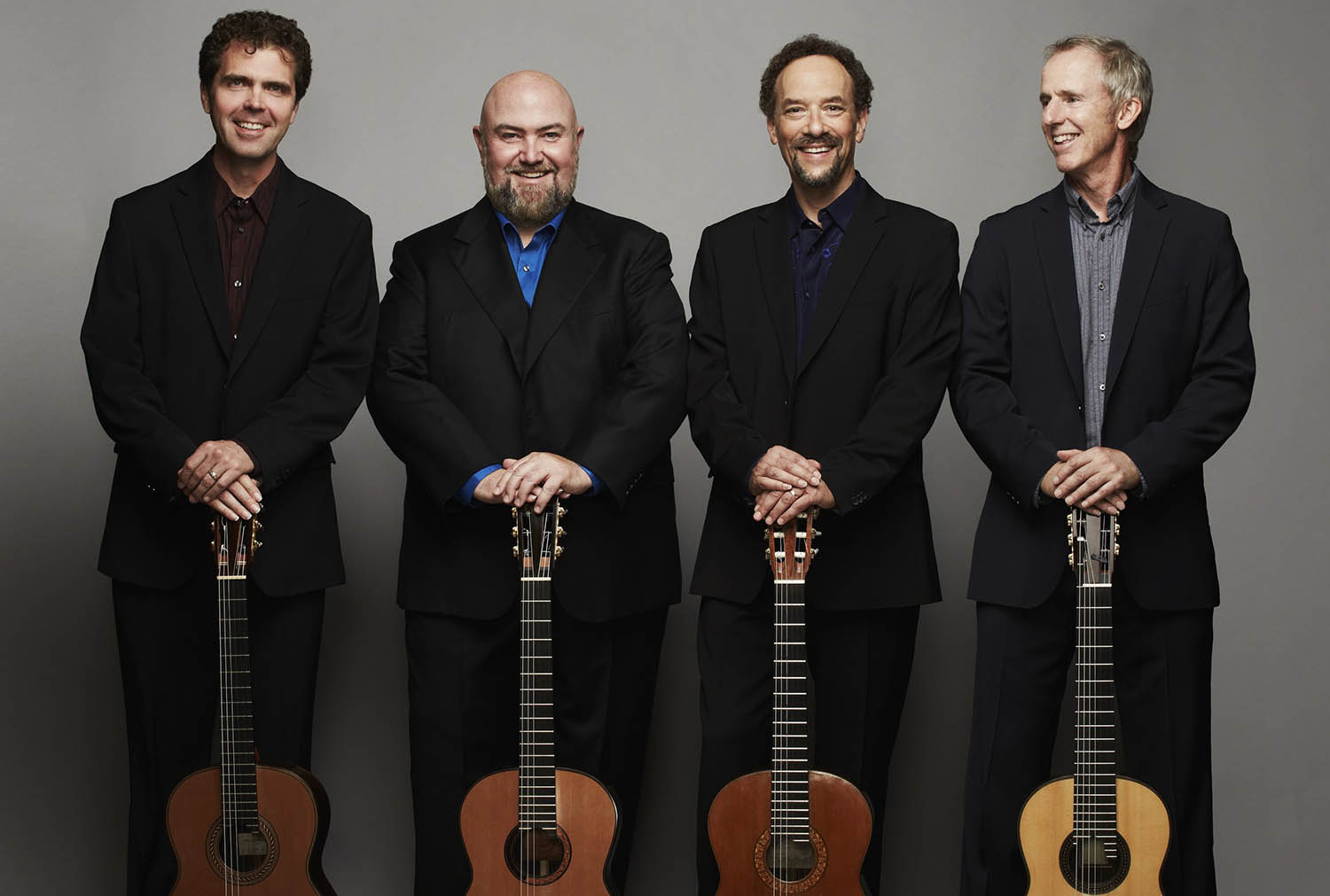 Although he wanted to write an original piece for the LAGQ the moment he drove through Glacier National Park, it took Metheny several years to find the time in his busy touring schedule. Once he started, however, the process went quickly, ideas flowed, and the vision for the work grew in scope.

“I think the title Road to the Sun references something much more than any specific place or time. So much of what the piece represents to me is the idea of searching for the light in things, music in particular, and the journey that one has to make to get there,” Metheny wrote in the program notes accompanying the piece. “This piece is a pretty deep look into that search and that title seems to have a kind of resonance with it.”

LAGQ will present the Los Angeles premiere of “Road to the Sun”, as well as new works by Robert Beaser and Frederic at their only Southern California appearance this season at the Pasadena Presbyterian Church on Saturday, February 16 at 8:00 pm.  Presented by LA Sound Foundation, tickets are available at lasoundfoundation.org or by calling 626-386-5720.