Laure Sudreau was born and raised in Paris, where she earned her first law Master’s degree in 1993. She then moved to Los Angeles, working as a foreign law consultant for Dewey Ballantine. She attended Pepperdine University School of Law, earned her second Juris Doctor, and qualified for the California Bar in 1997. Following that, Sudreau focused on entertainment law and production at Fox Kids and Disney ABC/Touchstone Television. In 2002, she relocated to Connecticut to work as a corporate counsel for Louis-Dreyfus, her family business, while raising her two small children.

In 2008, Sudreau deviated from her position as an attorney to focus more of her time on philanthropic endeavors. She was an active board member for the Lung Cancer Research Foundation, in honor of her late husband. In partnership with her alma mater, Pepperdine University, she established the Sudreau Global Justice Program to support initiatives in international human rights and religious freedom, advancement of the rule of law, and global development. Most recently, Sudreau has returned to her roots in the entertainment industry, dedicating time to the growth of her film financing and production company, Ouroboros Entertainment. Ouroboros Entertainment recently premiered its first feature film, GRACE, which was purchased by Showtime.

Along with focusing her energy on the arts, Sudreau is busy raising her two children and cheering on the Trojans! 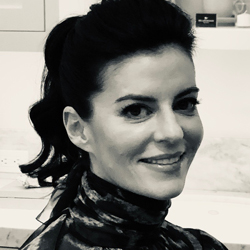