Not Quite Home for the Holidays 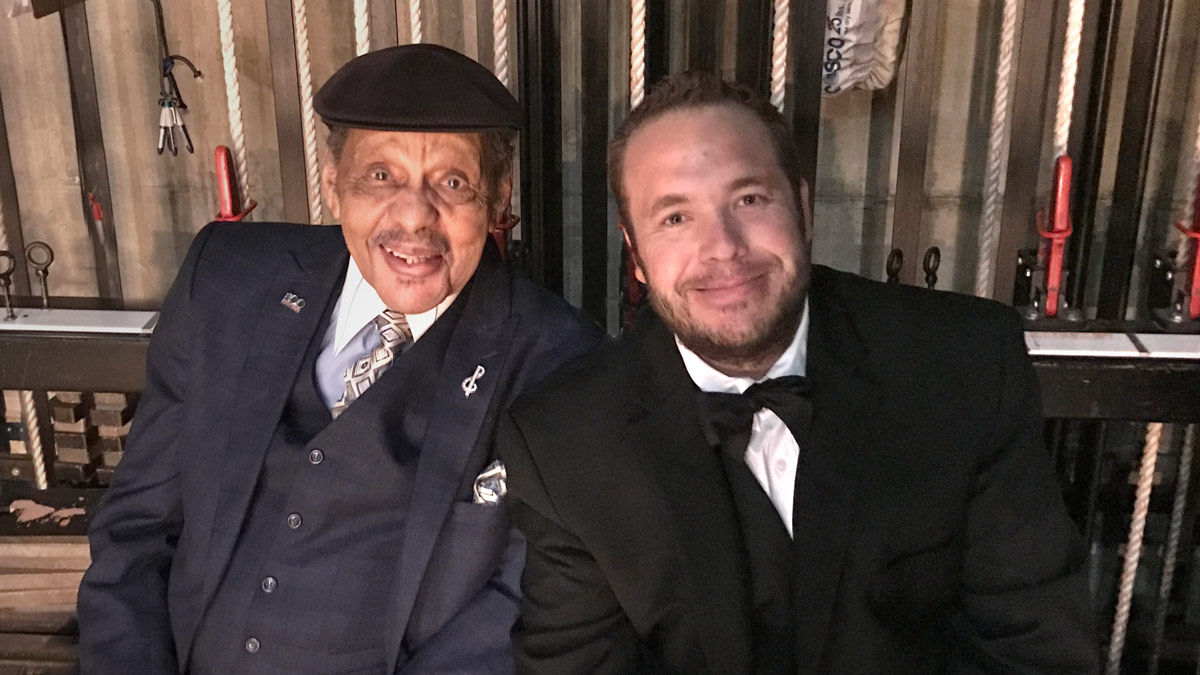 “It was a Hydro Flask,” said the trumpeter and active freelance musician. “I was sad to lose it.”

Retracing his steps to recover the missing bottle might be a challenge. In the final six weeks of 2016, Simonsen worked constantly, keeping a hectic schedule familiar to many freelance musicians across Los Angeles. The elusive water bottle could be anywhere from Hermosa Beach to La Quinta, from Dana Point to Palm Springs, and so many places in between.

By his own calculations, Simonsen played more than 25 gigs over the holidays, logged over 3,000 miles on the road, and spent over 100 hours in his car. His gigs ranged from playing with the Lakers Band during home games at Staples Center to giving trumpet lessons in La Quinta, performing with his group Trumpetology in Hermosa Beach, donning a white suit with a brass band at the Americana Mall in Glendale, and dressing as a drum major and marching down a fake Main Street at Paramount Studios. 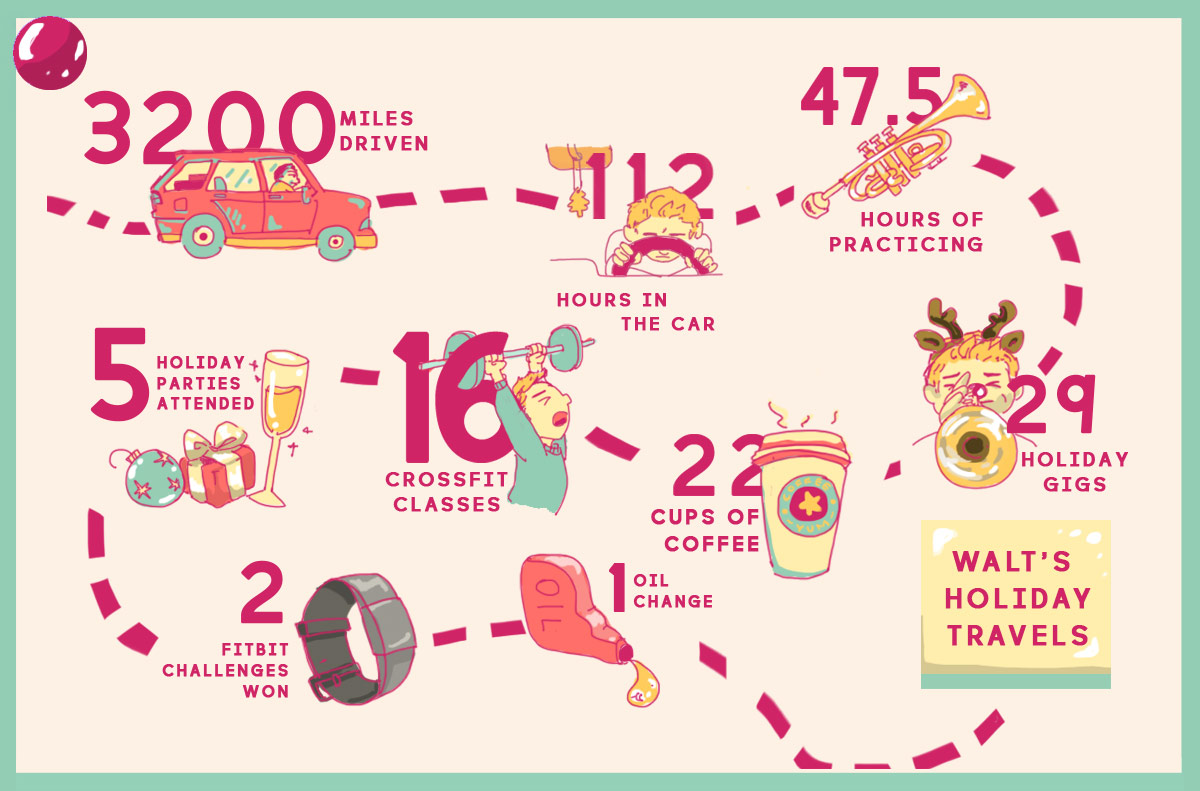 Often, Simonsen had multiple engagements on the same day. He spent his holidays working: in a church for Thanksgiving; in Palm Springs for New Year’s Eve; and recording in his Pasadena home on New Year’s Day.
Such is the life of a freelance musician. Even as he wraps up one project, Simonsen is eternally on the hunt for his next gig, and the Mission Viejo native wouldn’t have it any other way.

“I’m the kind of guy who, if I could, I would play every day, work every day—and between teaching, writing and playing, I typically do,” he said.

In addition to keeping a detailed log of work, Simonsen tracked other elements of the 2016 holiday season. Caffeine intake, for instance. A self-professed coffee addict, Simonsen consumed over 20 Venti drips from Starbucks and dropped $60 at Bulletproof Coffee in Santa Monica.

And no matter how late his gigs went the night before, Simonsen always set his alarm for 6:00 a.m. to fit in sessions of Crossfit. Meet-ups with his wife, Michelle Maestas Simonsen, who is Thornton’s Director of Operations and a busy freelance musician herself, were hit and miss. By Simonsen’s calculations, the two enjoyed dinner together only five times over the holidays.

“As busy as I was, she was just as busy doing her own thing,” Simonsen said. “We’ve been together so long, we’re used to this kind of lifestyle. The loneliest one was probably our dog, Duplemeter.”

Simonsen performed with the Americana Brass in Glendale (left). At right, Simonsen prepared for a marching band gig at Paramount Studios, for which he arranged the music, contracted the band, wrote the drill, played trumpet, led the group, and moonlighted on cymbals.​

In addition to having keen calendar-management skills, an active career as a freelance musician requires some very serious musical chops, matched by an equally flexible attitude. Freelance musicians must be able to thrive in any situation. It also helps to have a likeable personality – and a large network of musical colleagues.

Simonsen, who in addition to his active freelance schedule is the assistant director of the big band and teaches jazz trumpet at the Colburn Community School, picked up many of these skills while studying at Thornton. While earning Masters and DMA degrees, he played in every possible jazz ensemble, studied with Los Angeles Philharmonic trumpeter and longtime Thornton faculty member Boyde Hood and worked as the assistant director of the USC Trojan Marching Band for close to a decade.

“Being a freelancer, it’s ingrained that you are always looking for the next gig, the next experience, and it doesn’t dawn on you until you hit a lull,” Simonsen said. “You keep up this breakneck pace and then when you have a day when nothing is going on, you get depressed about it and feel almost guilty not working.”

Walter Simonsen (left). At right, Simonsen plays a holiday gig with his Trumpetology group at The Lighthouse in Hermosa Beach.

Simonsen and his wife waited until after the holiday season to take their vacation. In early January, they traveled to Berlin, Paris and London. He arrived home last week and, between teaching and a recording session, put in a full day of work on his first day back.

“Honestly, I feel lucky to do this,” he said. “Even though the schedule sounds intense and it can be kind of hard to keep it together, I wake up really excited to play the trumpet and make music with people I enjoy making music with.”

Always on the hunt for work, Simonsen had one final message to impart. “Let the readers know that although December sounded busy, for the rest of the year, I don’t have anything booked. So they can still go ahead and call me.”