On the Road with the Chamber Singers 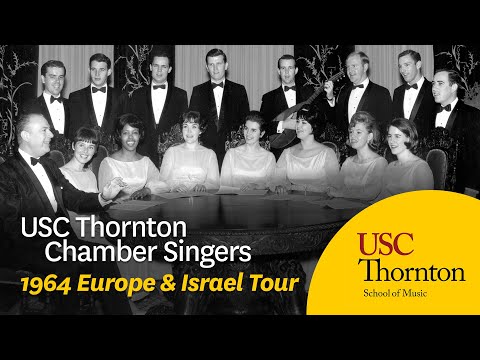 As we celebrate the USC Thornton Choral & Sacred Music program this week, let’s look back on a 1964 film of the USC Thornton Chamber Singers’ international tour of Europe and Israel. From February through May of that year, the ensemble’s 17 singers performed more than 100 concerts in some of the world’s premiere concert halls, including the Musikverein in Vienna, under the leadership of conductor Charles C. Hirt.

One of the singers and a former faculty member, Doug Lawrence ’66, MA ’73 served as a business manager for the tour and assembled this footage, which was shot by fellow performer Paul Mayo ’57. The ensemble’s busy concert schedule left just a bit of room for fun and sightseeing – though the film’s opening shot of a crashed tour bus shows that it wasn’t all fun and games. All in all, the group enjoyed a spectacular tour across 8 different countries, making headlines along the way.

Formed in 1939, the Chamber Singers quickly emerged as USC’s most acclaimed vocal ensemble and continues to live up to its excellent reputation. The group recently performed with the Rolling Stones under the direction of Choral & Sacred Music chair Jo-Michael Scheibe and will next present a program of Prayers & Intercessions at St. John’s Episcopal Cathedral on April 29th.