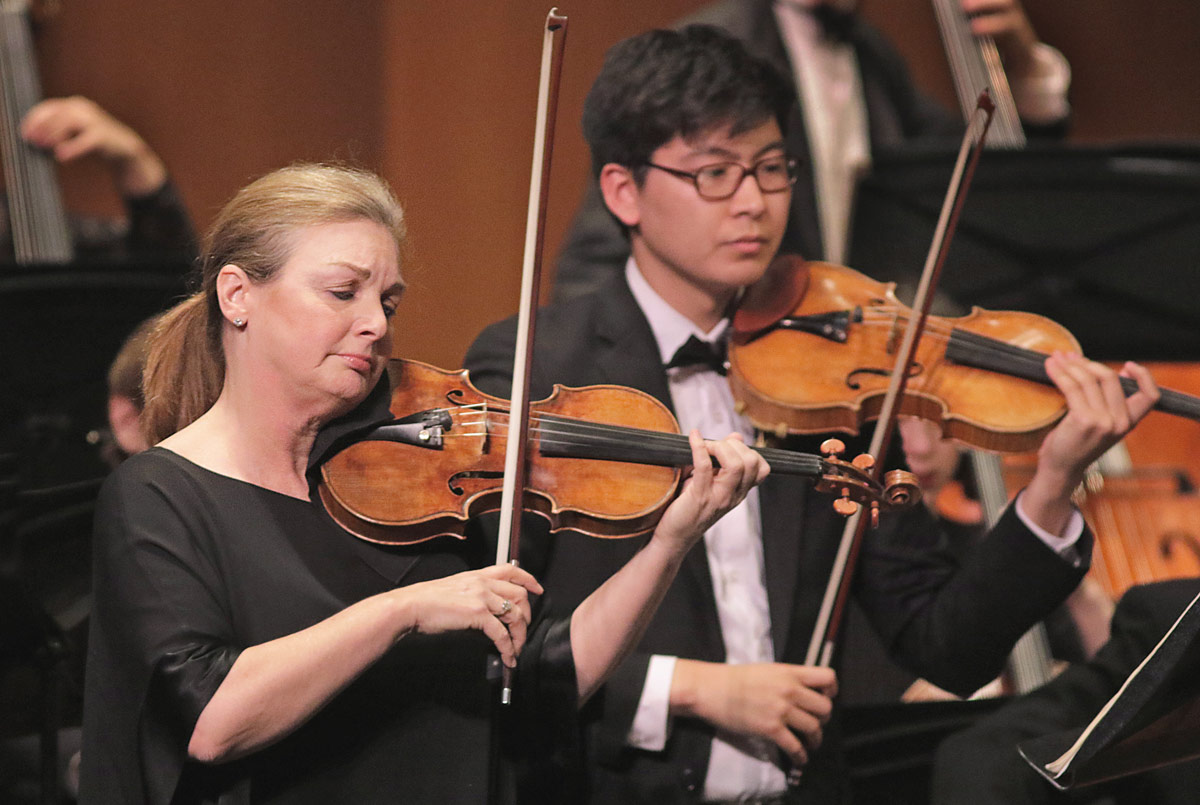 “I find Los Angeles to be the most vital artistic community in the country right now,” faculty member Margaret Batjer said with authority and enthusiasm during a recent conversation about her work with the USC Thornton Strings department. “And we really have to look no further than our campus.”

That’s no small praise coming from someone who began her career in a booming New York music scene and won the concertmaster’s chair with the Los Angeles Chamber Orchestra in 1998.

“For instance, our Composition department at Thornton is one of the single most esteemed departments in the country. Andrew Norman, who has won virtually every competition prize, is on our faculty,” Batjer said. “We have composers who are the living legends, the young and the not-so-young, all migrating to L.A. Brooklyn was the capital of the composers, and now it’s here.”

The Strings department boasts similar credentials, drawing esteemed players to the faculty like Batjer and Los Angeles Philharmonic Concertmaster Martin Chalifour, in a tradition of excellence that has spanned more than a century and includes Jascha Heifetz and Gregor Piatigorsky. Chaired by Ralph Kirshbaum and Midori Goto before him, the Strings department has flourished with their “exceptional vision,” Batjer said, and boasts “a very esteemed and vital faculty who are incredibly dedicated to not only the students but to the department and program.”

The caliber of the faculty and their creative thinking about education, as well as the talent of the students, were clearly on display at the USC Thornton Chamber Orchestra’s April 14 concert. The budding musicians conveyed all the beauty of Franz Joseph Haydn’s “Evening” Symphony and Felix Mendelssohn’s “Italian” Symphony — without the benefit of a conductor. 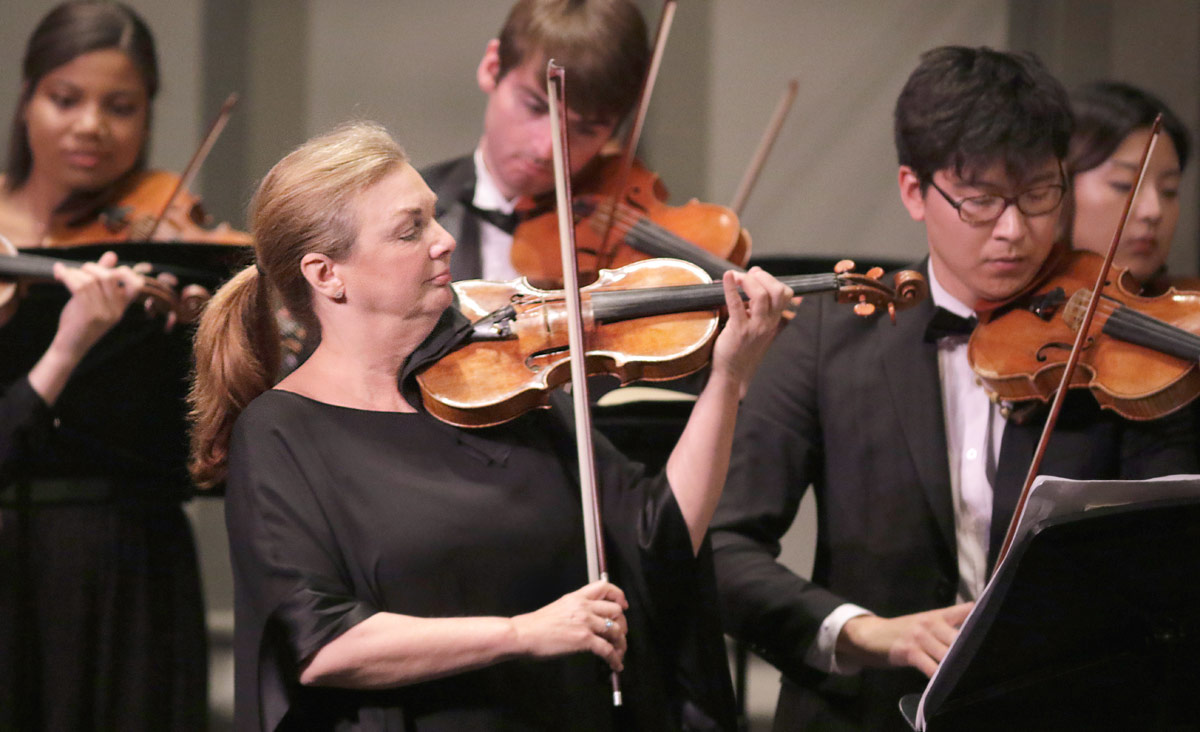 Performing without a conductor

That mainstay of orchestral performance, the conductor, was noticeably absent from the April 14 concert, because the event was part of an ongoing exploration of conductorless musicianship in the USC Thornton Orchestra program. The initiative was launched by artistic leader and principal conductor Carl St.Clair in 2013 when the orchestra embarked on a week-long residency and student-led performance with the acclaimed conductorless ensemble, the Orpheus Chamber Orchestra.

“Carl’s conductorless initiative is a gift to the students,” she continued. “This collaborative approach is such a vital part of their orchestral education because it teaches them a different skill set that they need in their musical professional lives and it’s not being done everywhere.”

While principal string players are more familiar with leading their sections, Batjer advises the principal winds, brass, percussion and other strings to take a more physical approach to their playing. “I’m trying to encourage them to not just sit and play as they do normally in an orchestral setting, but to actually lead with their bodies and conduct and connect visually with me, but also physically with their colleagues.

“As a concertmaster, when I’m leading, I don’t — and I can’t — command the same authority as a conductor at the podium,” Batjer said. “It’s very, very different than a conductor standing up and keeping the beat and the pulse and shaping the phrases. So all of those components of creating a performance come from the actual rehearsal time, and in the concert there are a lot of unknowns when you don’t have a conductor. That’s the exciting part of it.” 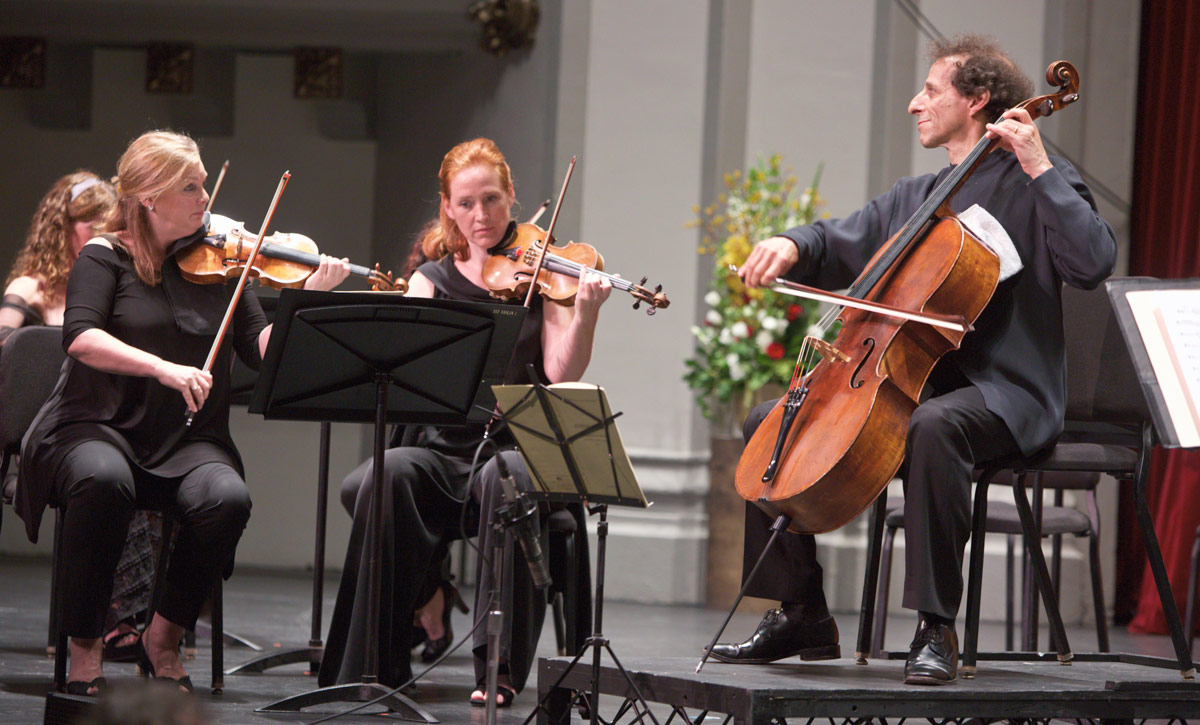 In May of 2016, Margaret Batjer led Los Angeles Chamber Orchestra in a conductorless concert featuring several cellists of the Piatigorsky International Cello Festival. Here, she leads the ensemble with cellist Colin Carr at USC’s Bovard Auditorium. (Photo by Dario Griffin/USC)

The value of mentorship

Another benefit of the conductorless initiative is that Batjer and other faculty can work one-on-one with more Strings students in Chamber Orchestra rehearsals than they can possibly instruct individually in their studios. “I am able to work with them on details of work in string playing that sometimes don’t get addressed in an orchestral setting: bow strokes and other nuances that are only part of string language,” Batjer explained.

And, the artist-teacher finds, the teaching relationship works two ways. “Teaching has enriched my life in a very profound way. It’s taught me so much about my own playing,” Batjer said. “It’s made me question a lot of my own musical ideas because, when you are mentoring or teaching, your ideas have to be incredibly well formulated in order to pass those on to students.

“When I work with a large ensemble like the USC Thornton Chamber Orchestra, I feel privileged to work with that many kids and hopefully inspire them and maybe teach them something they’ll take with them in their professional lives,” Batjer said. “That’s the wonderful part of getting this opportunity, personally.”