Looking back on 2015-16, there’s no doubt that USC Thornton students, faculty and alumni enjoyed an extraordinarily fulfilling year. Let’s take a look at some of the most interesting news items from the past two semesters. 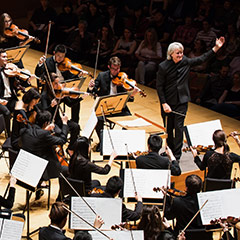 ). And the Polish Music Center celebrated its 30th anniversary with a series of fall concerts.

Thornton emerged as a powerhouse for new music composition and performance, with the flourishing of ensembles such as Hocket and Sakura. Some 23 Thornton students, faculty, and alumni were involved in The Industry’s groundbreaking fall production of the site-specific opera Hopscotch, including composers Veronika Krausas, Andrew Norman and alumnus Andrew McIntosh (GCRT ’12, early music).

Inspired by the innovations that he observed during a week-long visit to USC Thornton, pioneering music educator Tony Woodcock published a two-part story on the school and its programs for the Huffington Post. The Hollywood Reporter, meanwhile, ranked Thornton number three on its list of the “Top 25 Music Schools of 2015.”

Distinguished Professor of Composition Morten Lauridsen has been the focus of a semester-long video portrait, exploring in depth the ideas and inspirations behind his beloved choral works (Video

The American Harp Society honored JoAnn Turvosky, who has taught on the Strings faculty for over 30 years, with a Lifetime Achievement Award, while the Royal Conservatoire of Scotland has announced plans to award Strings chair Ralph Kirshbaum with an honorary degree this July. Musical America named clarinetist Yehuda Gilad one of its Professionals of the Year, while Jo-Michael Scheibe, chair of the Choral & Sacred Music department, conducted a group of 680 high school choristers from across the state of Utah at the Mormon Tabernacle. 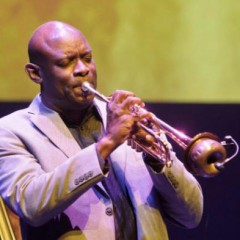 As part of his ongoing Langston Hughes Project, trumpeter and Jazz Studies professor Ron McCurdy was joined by rapper Ice-T in London, to critical acclaim. And Peter Erskine, Director of Drumset Studies, released an album in collaboration with many Thornton jazz musicians while saxophonist Bob Mintzer released his 20th big band recording. Meanwhile, songwriter and vocalist Melissa Manchester has embarked on an international tour in support of her new album.

Professor Bill Biersach, who has taught at Thornton for over 40 years, was celebrated with a special tribute at Carson Center. And Michele Zukovsky, of the Winds & Percussion department, retired as principal clarinetist of the Los Angeles Philharmonic after 54 years with the orchestra.

). Ana Barreiro (MM’15), a drummer and Jazz Studies alumna, was inspired to create and record original compositions that help shine a light on sexual violence against women in Africa. 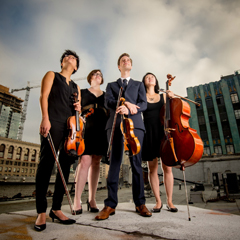 Composition alumnus Alan Chan (DMA ’08) was selected as the recipient of George Duke Commissioning Prize, co-created by the Symphonic Jazz Orchestra and The ASCAP Foundation. Ben Bram (’10, music industry) and Scott Hoying won their second GRAMMY Award for their arrangement of Pentatonix’s “Dance of the Sugar Plum Fairy,” from the a cappella group’s album, That’s Christmas to Me. Olivia Mitchell (BS ’14, music industry) premiered her short film, Girl Band, at the Tribeca Film Festival in April. And alumna Renée Elise Goldsberry (MM ’97, jazz studies) has been nominated for a Tony Award for her performance as Angelica Schuyler Church in the hit Broadway musical, Hamilton. 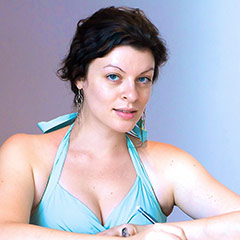 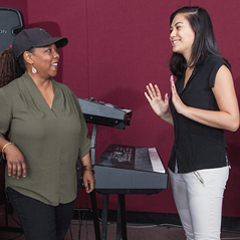 With help from her mentor, Popular Music chair Patrice Rushen, senior Karina DePiano is proving her mettle as a musical director while touring as a keyboardist for international artists, such as Rita Ora and Troye Sivan. And her fellow Popular Music graduates presented their Senior Showcase concert at the legendary Troubadour nightclub in West Hollywood in March, to a hugely enthusiastic crowd.