Thomas Newman is widely acclaimed as one of today’s most prominent composers for film. He has composed music for more than 50 motion pictures and television series and has earned 15 Academy Award nominations and six Grammy Awards.

He is the youngest son of Alfred Newman (1900-1970), the longtime musical director of 20th Century Fox and the composer of scores for such films as Wuthering Heights, The Hunchback of Notre Dame, The Diary of Anne Frank and All About Eve. As a child, Thomas pursued basic music and piano studies. However, it was not until after his father’s death that the younger Newman, then age 14, felt charged with the desire to write.

A turning point in Newman’s career took place while he was working as a musical assistant on the 1984 film Reckless, for which he soon was promoted to the position of composer. And so, at the age of 27, Newman successfully composed his first film score. Since then he has contributed distinctive and evocative scores to numerous acclaimed films, including Desperately Seeking Susan, The Lost Boys, The Rapture, Fried Green Tomatoes, The Player, Scent of a Woman, Flesh and Bone, The Shawshank Redemption, Little Women, American Buffalo, The People Vs. Larry Flynt, Oscar and Lucinda, The Horse Whisperer, Meet Joe Black, American Beauty, The Green Mile, Erin Brockovich, In The Bedroom, Road to Perdition, Finding Nemo, Lemony Snicket’s A Series of Unfortunate Events, Cinderella Man, Jarhead, Little Children, The Good German, Revolutionary Road and Wall-E. His most recent projects include The Debt, The Adjustment Bureau, The Help, The Iron Lady, The Best Exotic Marigold Hotel, Skyfall, Spectre, Side Effects, Saving Mr. Banks, The Judge, Finding Dory and Steven Spielberg’s Bridge of Spies. Newman also composed the music for HBO’s acclaimed six-hour miniseries Angels in America, directed by Mike Nichols. He received an Emmy Award for his theme for the HBO original series Six Feet Under.

In addition to his work in film and television, Newman has composed several works for the concert stage, including the symphonic work Reach Forth Our Hands, commissioned in 1996 by the Cleveland Orchestra to commemorate their city’s bicentennial, as well as At Ward’s Ferry, Length 180 Ft., a concerto for double bass and orchestra commissioned in 2001 by the Pittsburgh Symphony. His latest concert piece was a chamber work entitled It Got Dark, commissioned by the acclaimed Kronos Quartet in 2009. As part of a separate commission by the Los Angeles Philharmonic, the work was expanded and adapted for symphony orchestra and string quartet and premiered at Walt Disney Concert Hall in December 2009. In October 2014, Newman and musician Rick Cox released 35 Whirlpools Below Sound, an evocative, contemporary collection of avant-garde electronic soundscapes which the two collaborators developed over a period of 25 years, and which constitutes a fascinating departure from Newman’s work in film music. 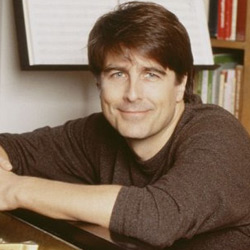