One of the first Ableton Live Certified Trainers and AVID Protools Expert, Preece is a skilled educator who integrates real world experience and leading-edge techniques in his teaching approach. He’s developed curricula for several highly regarded training centers, was a course director for sound art courses at Ex’pression College and an instructor at Foothill College and Pyramind in the Bay Area.

Musically, Preece has two current projects which revolve around Ableton Live and advanced controller configurations—Gravity Terminal, a dark cinematic electronic creation/design/performance and Planetary Cymatic Resonance, a project based on tunings calculated from natural frequencies found in our universe like the movement of planets or the resonances of molecules.

Preece is also a journalist for the popular audio technology website Ask.Audio and has written articles, reviews and tutorials for products and companies including Elektron, Ableton, Roland, Keith McMillen, SubPac and others. Additionally, he creates online video courses for Ask.Video (MacProVideo) that explore creative sound design and music production/performance techniques. Preece holds degrees in Ethnomusicology from UCLA and a Masters in Sound Design from the University of Edinburgh, UK. 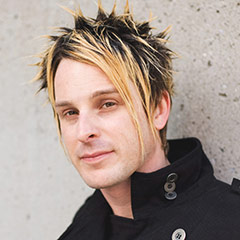