The son of a cattle buyer, Tom Beckmen spent his childhood working on a local ranch outside of Chicago, gathering onions and picking tomatoes. This early experience helped him to develop a connection with the land and expertise as a hands-on farmer. Raised with an extensive understanding of agriculture, he put himself through college by managing farm programs.

In addition to having farming experience, Tom is also an accomplished entrepreneur. In the early ’60s, Tom was a traveling salesman or “music man” for 20 states. During this time, he noted the great changes that were taking place in the music industry. Seizing the moment, Tom founded the visionary Roland Corporation U.S., pioneering electronic music and creating the merger of music and computer applications. This revolutionary company and its products profoundly influenced the production of music worldwide.

The heart of Tom’s entrepreneurial success has always been his ability to look toward the future and embrace new challenges. This desire to continually evolve and test himself prompted Tom to sell Roland in 1993 and pursue a life of winegrowing.

Since founding Beckmen Vineyards with his son Steve in 1994, Tom has been focused on the cultivation of his estate vineyards and new innovations for winegrowing in the Santa Ynez Valley. He brings both business acumen and a respect for the hard work of farming to Beckmen Vineyards. In wine, as in everything else, Tom is driven to go beyond expectations. His vision and patience have guided the maturing of Beckmen’s estate vineyards and the production of the winery’s acclaimed portfolio of handcrafted wines. “My wines must be worthwhile for me, my family and the public who drink them.”

Tom enjoys both the natural beauty and the peace of the vineyards that surround his home, where he lives with his wife, Judy. As a hands-on farmer, driving the tractor and working the vines, he has helped to establish Purisima Mountain Vineyard as a world-class winegrowing site, and the source of some of North America’s most highly prized Rhone varietal wines. He has also been an important figure in the emergence of Santa Barbara County as one California’s preeminent winegrowing regions. 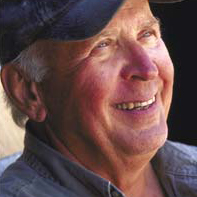