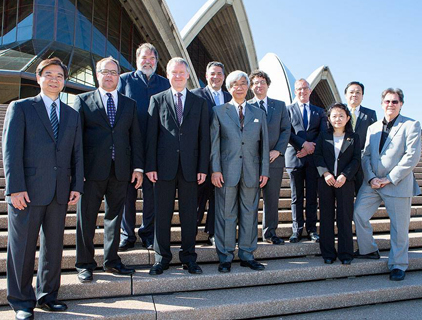 Last week, USC Thornton School of Music Dean Robert Cutietta traveled to Sydney, Australia to participate in the inaugural Asia Pacific Music Summit. The four-day event took place April 2-5 and included leading music schools from Asia and the Pacific. To create closer ties between the institutions and build the region as a driving force of music education and culture, summit representatives established a new Pacific Alliance of Music Schools (PAMS).

USC Thornton, along with the San Francisco Conservatory of Music, were the sole institutions invited to represent the United States.

“I could not be more pleased to be able to spend quality time with these Pacific Rim music leaders” Cutietta said. “Our discussions about the future of classical music, and music in general, have been very stimulating.”

“This inaugural conference is an outstanding beginning to an important alliance of the finest music schools on the Pacific Rim,” said David Stuhl, President of the San Francisco Conservatory. “Global interchange is the future of music and education. I am tremendously enthusiastic about the potential of this initiative.”

While collaborations have existed for some time between many institutions in the region, the summit marked the first gathering of deans and presidents of the partner schools. During the summit, participants in the new alliance decided to solidify their affiliation with an annual convention. A different member institution of the alliance will be tasked with hosting the gathering each year.

The summit comes at a time when countries such as China are experiencing a major boom in classical music, and where the audiences are generally much younger than those in America and Europe.

“The purpose of holding this summit is to strengthen the inter-conservatory exchange and collaboration more widely, so that the resources in the Asia-Pacific region can be integrated,” said Beijing Central Conservatory of Music’s President Wang Cizhao. “We can work together on promoting international music education.”

This sharing of ideologies is an integral component to both PAMS and the summit, according to Sydney Conservatorium of Music Dean, Dr. Karl Kramer.

“While we all assume the Western music tradition of teaching, each institution is mutually exclusive in terms of how it operates. We are 12 unique case studies, each with different expertise to share. The summit is a starting point to forming stronger human connections between the institutions to encourage greater and more regular dialogue across the region.”

The summit concluded with an orchestral concert featuring student performers from the Beijing, Shanghai, Melbourne and Sydney conservatories. The concert will included premiere performances of two works composed by two summit delegates: Professor Barry Conyngham from Melbourne and Professor Xu Shuya from Shanghai.

The members of PAMS and delegates of the Asia-Pacific Music Summit are:

“Global interchange is the future of music and education."