When the USC Thornton Jazz Honors Combo learned they would be without their pianist for last month’s Next Generation Jazz Festival in Monterey, CA, there was no last-minute scramble to find a replacement or to change up the set.

That’s because the group, led by Jazz Studies faculty Jason Goldman, is comprised of what Goldman calls USC Thornton’s “top notch” jazz students — young performers so in-tune with their craft, they can hold their own with professional musicians. In fact, the Jazz Honors Combo often represents the Jazz Studies department at high profile university events.

So, it should come as no surprise that, even without a pianist to anchor the rhythm section, the Jazz Honors Combo won first place prize in Next Generation’s College Open Combo Division. The win also comes with a once-in-a-lifetime prize: the opportunity to play at the 2014 Monterey Jazz Festival this September.

“Our goal has never been to go and win a festival,” Goldman said of the win. “We always want to have a good set of music that an audience can relate to. It was never about whether the Combo could perform without the piano — but when you don’t have a piano or guitar, it can make it more difficult for the audience to hear certain sounds and harmonies.” 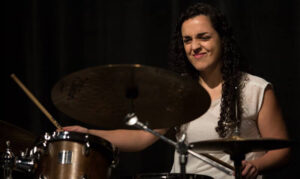 “Some drummers use all of their chops, showing all they can all in one solo,” Goldman explained. “Ana is a bit more controlled and purposeful. Her playing really compliments the band, which is sort of the whole concept of the Combo. It’s never been about the individuals, it’s always about the group.”

This Thursday, the Jazz Honors Combo will return to the stage for another high-profile gig — but without the pressures of a competition. Rather, the group will join forces with DJ Stryke, a Miami-based producer and artist credited with spearheading the techno and house movements in the late 1980s and early 1990s. Unlike the Combo’s more traditional performances, the collaboration with DJ Stryke will emphasize jazz’s roots as dance music, with the venue transforming into a dance club for the evening.

“We’re basically combining techno and house music with live jazz on stage,” Goldman said. “When I first asked Stryke if he wanted to be involved, he was really excited by the idea. We just want to bring back jazz to what it once was, which was this exciting social experience.”

While the collaboration does extend outside what is commonly taught or performed in other jazz programs. Goldman believes that exposing the Jazz Honors Combo students to atypical performances is essential to building a lasting career as jazz musicians. 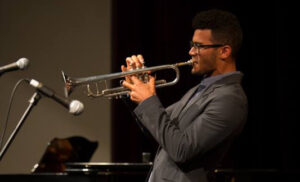 “In Los Angeles, a lot of jazz musicians end up touring in pop bands, becoming producers and exploring different styles of music,” he said. “At Thornton, we teach the traditional elements of jazz — but we also make sure the students are prepared to work beyond that tradition.  There is so much opportunity for skilled performers to succeed here.”

The USC Thornton Jazz Honors Combo will perform with DJ Stryke on Thursday, April 10 at Ground Zero Performance Café on the USC campus. The free event begins at 7:00 p.m. and is open to the public.

"There is so much opportunity for skilled performers to succeed here.”