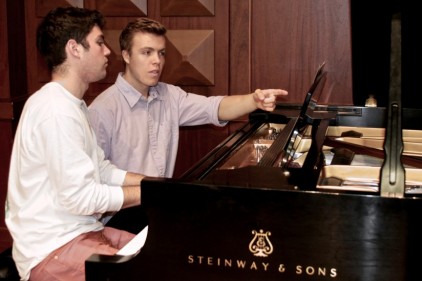 On Monday, two USC seniors will be on the world stage in Kraków, Poland, at the commemoration of the 70th anniversary of the liberation of the Auschwitz-Birkenau concentration camp, playing a piano suite they composed.

Alex Biniaz-Harris and Ambrose Soehn wrote the piece for two pianos during the fall, basing it on melodies sung by Holocaust survivors they found in the video testimony archives of the USC Shoah Foundation — The Institute for Visual History and Education.

They had thought their five-minute piece, Auschwitz Suite, might be used in one of the foundation’s documentaries, but a week ago, they were asked to play it at the upcoming gathering of survivors in Kraków. Violinist Itzhak Perlman had been scheduled to perform, but travel complications prevented that. So event organizers turned to the two young Trojans.

The musicians are nervous and excited, but they make it clear that the opportunity is not about them.

“The reason we wrote this is to do our part to make sure this atrocity will be remembered always,” Biniaz-Harris said.

The performance was featured in an article in the Los Angeles Times.

Both musicians are interdisciplinary polymaths. Biniaz-Harris, of Washington, D.C., is a double major in keyboard studies at the USC Thornton School of Music and in marketing and entrepreneurship at the USC Marshall School of Business who hopes to work in the entertainment industry. He came to USC in part to work at the USC Shoah Foundation.

Soehn, of Boulder, Colorado, is a neuroscience major at the USC Dornsife College of Letters, Arts and Sciences and a keyboard studies minor at USC Thornton, who is in the running for a 2015 Fulbright scholarship.

The students met during their sophomore year in Bernadene Blaha’s four-hands piano class at USC Thornton (“one of the most fun classes at USC,” they agreed), and both later interned at the USC Shoah Foundation.

Soehn, who traveled to Rwanda as part of USC Dornsife’s Problems Without Passports program, watched testimony clips to help create an interactive timeline for the 20th anniversary of the Rwandan genocide. Biniaz-Harris works on the foundation’s social media team, finding testimony clips to illustrate current issues.

“Working at the Shoah Foundation is by far the best student job you can have on this campus,” Soehn said.

Stephen Smith, the USC Shoah Foundation’s executive director, gave them the idea of composing original music using melodies that survivors had remembered from their time in concentration camps. Many of these songs are preserved in the foundation’s archives.

“You can hear their pain in the melodies of the music,” Biniaz-Harris said.

The two talked with USC Thornton faculty member Nick Strimple, recognized internationally for his work with music related to the Holocaust, and drew upon their lessons with their piano professors (Soehn with Norman Krieger and Biniaz-Harris with Antoinette Perry).

Soehn drew upon his experience composing a violin piece last spring for the commemoration of the Rwandan genocide. And Biniaz-Harris drew upon an even more personal connection – the memories of his 83-year-old grandmother, Celina Biniaz of Camarillo, an Auschwitz survivor who had not spoken of her experience with her own family until around the time she was videotaped by the USC Shoah Foundation in 1995. Biniaz will be in Poland on Monday to see her grandson perform, along with his mother, Sue Biniaz.

Soehn wrote the first movement, “Exodus,” a romantic section, full of longing, calling to mind the imagery of Jews being forced to leave their homes. Biniaz-Harris wrote the second, “Ashes to Earth,” in a darker, more bombastic style, referencing the cloud of ashes from the crematoria that survivors described seeing at Auschwitz.

The composers collaborated on the third movement, “Inner Refractions,” which gives musical language to “a scarred emptiness that sounds like ghosts or hollow shells,” Biniaz-Harris said.

Click here to read the article at USC News and hear audio samples of the piano suite.