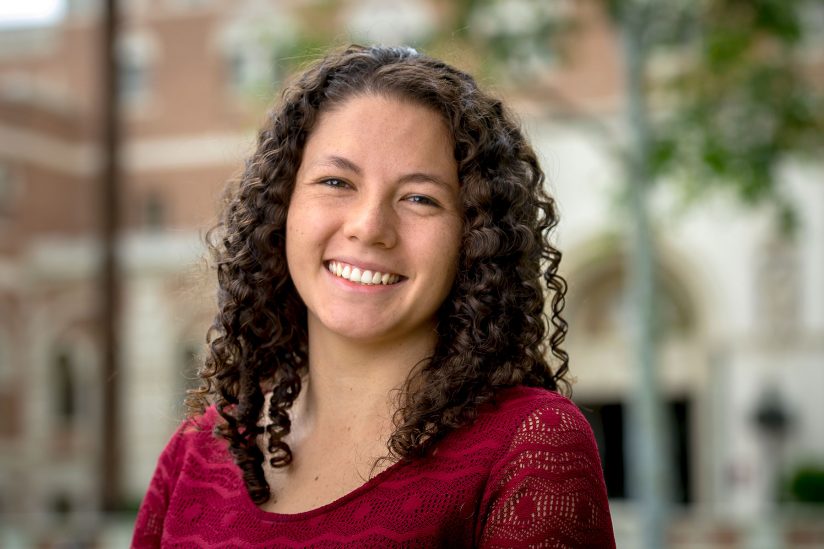 USC valedictorian Rose Campion majored in history and music and will be pursuing a master’s in musicology at Oxford in the fall. (USC Photo/Gus Ruelas)

Rose Campion gets behind the lectern, she likes to teach music that’s relatable.

“Music history is usually taught from the beginning of time to the present and it’s very ethnocentric and classical-centric,” said Campion, USC’s 2018 valedictorian.

When Campion isn’t at USC, she spends her time teaching music at other campuses — those of schools throughout the neighborhoods around USC. She’s been doing it since her freshman year, through the USC Thornton Community Engagement Program.

She’s taught music history to pupils from the pre-kindergarten to advanced placement levels.

“Freshman year I was teaching second-graders how to sing. I would turn around and see them in the grocery store as well,” said Campion, who will graduate with majors in history from the USC Dornsife College of Letters, Arts and Sciences and music from the USC Thornton School of Music.

“I enjoyed that aspect of being a part of the community outside of the gated brick walls.”

When working with high schoolers at nearby Foshay Learning Center, Campion likes to break music history up into themes, such as music and nation, music and ownership, or music and intellectual property.

“In the Baroque period, it was much more acceptable to rewrite tunes others had written,” said Campion, 22. “Now, attitudes toward ownership and intellectual property have changed. A spate of recent court cases has restricted this sort of borrowing and will certainly impact sampling and similar practices.”

While many of the pupils she sees might not read music, almost all can cite a piece of music they like or have seen the way it impacted their community.

“It allows us to explore the overlap in music from Beethoven to Beyoncé to music of Botswana,” she said. “In doing so, my hope is that can see … there are a lot of common threads through arts and culture.”

Campion has researched how cultures have attempted to raise awareness around music in the past, which is helpful in community engagement. For example, she dedicated her senior honors thesis to “music and middle brow.”

“It’s not highbrow, now lowbrow — these works of art that try to transcend these brow divisions,” she said, noting it won Best Honors Thesis from the Department of History and first prize at the USC Undergraduate Writers’ Conference.

As an example, she’s researched World War I-era folk songs recorded in the English countryside. Composers, who came from better means, were capitalizing on the talents of the poor.

“One thing we discussed was the power balances that go into ethical music consumption,” she said. 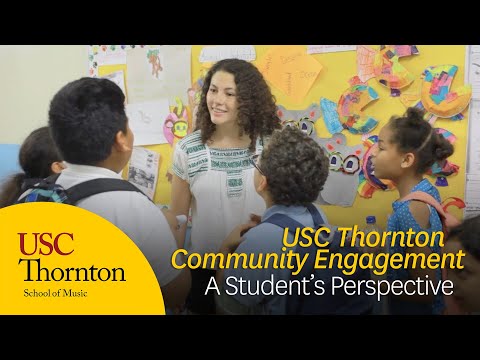 Reaching out to USC

Campion’s passion for music is what brought her to USC — originally as a trombone performance major.

Growing up in a quiet mountain community of South Lake Tahoe, “not a very significant percentage of my high school goes on to four-year universities,” she said — maybe a quarter of her classmates.

“This was my reach school for music,” she said of USC Thornton.

While on spring break during her junior year of high school, she reached out to USC Thornton Winds & Percussion professor Terry S. Cravens, a trombonist, to ask if she could arrange a private lesson during a trip to Los Angeles.

“When I took that lesson junior year, we just clicked. He even sent me sheet music and practice materials after I went home to Lake Tahoe,” she said.

When it came time to apply, she said Cravens was instrumental — pun intended.

“When I got the admission letter and the invitation to interview for a scholarship, I emailed Terry with approximately 15 exclamation points,” she joked.

As for the future, Campion wants to encourage kids to pursue music, especially those in under-resourced communities.

“I think my skill set is best served as a music advocate,” she said. “I still like to perform and write music, but I think this is my calling.”

This fall, she’ll start a master’s program in musicology at Oxford University in the United Kingdom. That’s doubly exciting because Campion is a Harry Potter fan. Former president of the USC Quidditch team, she can now stomp the grounds featured in the hit film franchise.

“It may be time to dust off my broomstick and get back on the pitch with the Oxford team come fall,” she said.