Winning the Game of Musical Chairs 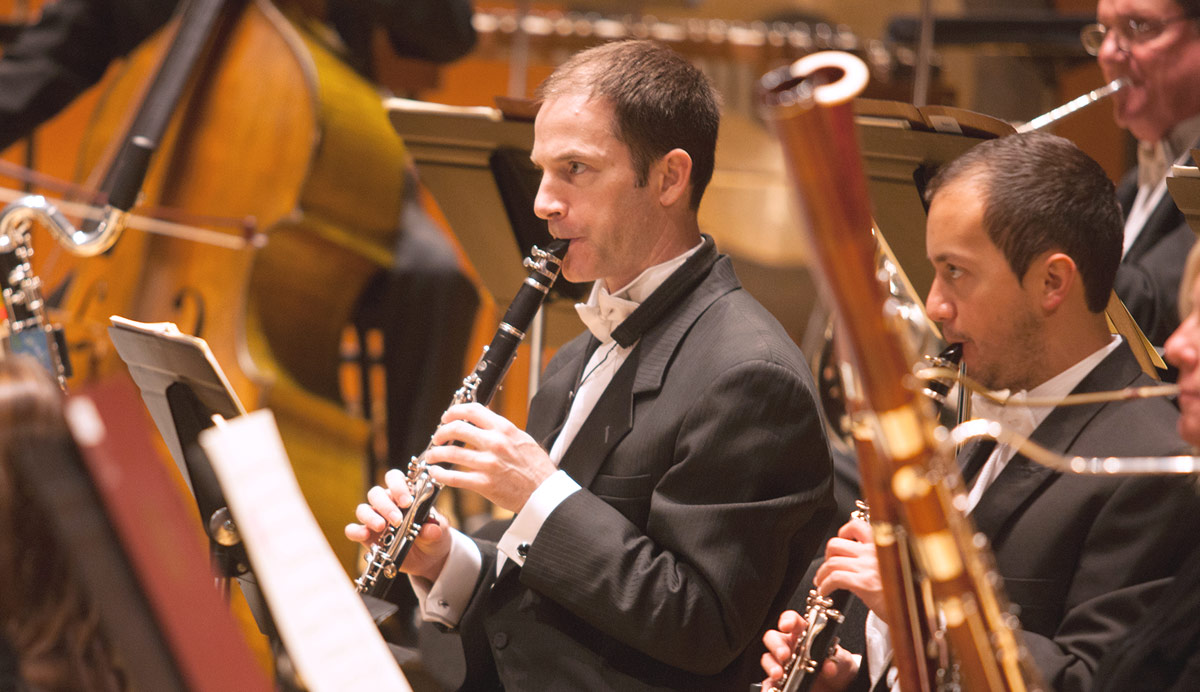 John Klinghammer (MM ’98, DMA ’06), at left, is one of three Thornton alumni in the clarinet section of the Kansas City Symphony. At right is associate principal clarinet Gabriel Campos Zamora. (Photo by David Bickley)

The odds of winning a position in a full-time orchestra are daunting. Nabbing a spot in the annual musical chairs playing out across the nation is rare, but graduates of the USC Thornton School of Music have been winning these highly competitive seats at an enviable rate.

“Four of the six horn majors who graduated from Thornton in May left with jobs that they won this year,” said Kristy Morrell (MM ’94, DMA ’97), professor of horn and chair of the Winds & Percussion program. “Emily Browne (MM ’16), won principal horn in the Spokane Symphony and was granted tenure. Katie Upton (MM ’16), won third horn in Orquesta Filharmonica. Katelyn Benedict, (MM ’13), DMA candidate, won third horn in the New Mexico Philharmonic, and Dallin Taylor (’16) earned a spot in the Marine band.”

USC Thornton clarinet professor Yehuda Gilad has been turning in numbers like that for years. It’s not uncommon for orchestras to hire more than one of his students at a time. The Seattle Symphony currently has two of his students, and the Kansas City Symphony clarinet section includes three alumni: Raymond Santos (’06), John Klinghammer (MM ’98, DMA ’06), and Jung Wan Lee (GCRT ’08, MM ’13). The fourth member of the section, associate principal clarinet Gabriel Campos Zamora, studied with Gilad at the Colburn Conservatory of Music.

“ This is the whole reason why we teach. We can push our students to be the best that they can be and help them to realize their dreams of a career in music.”

“It’s the same family of students, and I’m very proud of them,” said Gilad, an accomplished clarinetist, music director and conductor who has become one of the most celebrated professors of clarinet in the world. “Our grads are all over the world right now — in the New York Philharmonic, the Concertgebouw, Swedish Radio, Madrid.”

But even the most recent wins for Thornton don’t end there. Since May 2015, over 20 Wind & Percussion grads have secured coveted orchestra jobs (see infographic below).

In addition to the work of Morrell and Gilad, the students of flute professor James Walker, bassoonist Judith Farmer and faculty across the department are winning jobs. The percussion students of Joseph Pereira, principal timpanist of the L.A. Phil, and James Babor, Pereira’s colleague at the Phil, are seeing similar success.

“This is the whole reason why we teach,” Babor said. “We can push our students to be the best that they can be and help them to realize their dreams of a career in music.”

The Winds & Percussion department has been bolstered by the arrival of exceptional new faculty as well, including Thomas Hooten, principal trumpet of the L.A. Phil, and saxophonist Jessica Maxfield.

“We are really beating the odds at Thornton,” Morrell said. “It’s not just our department. Job wins are coming in all the time and across all the disciplines at Thornton. I’m very excited about what we’re doing!” 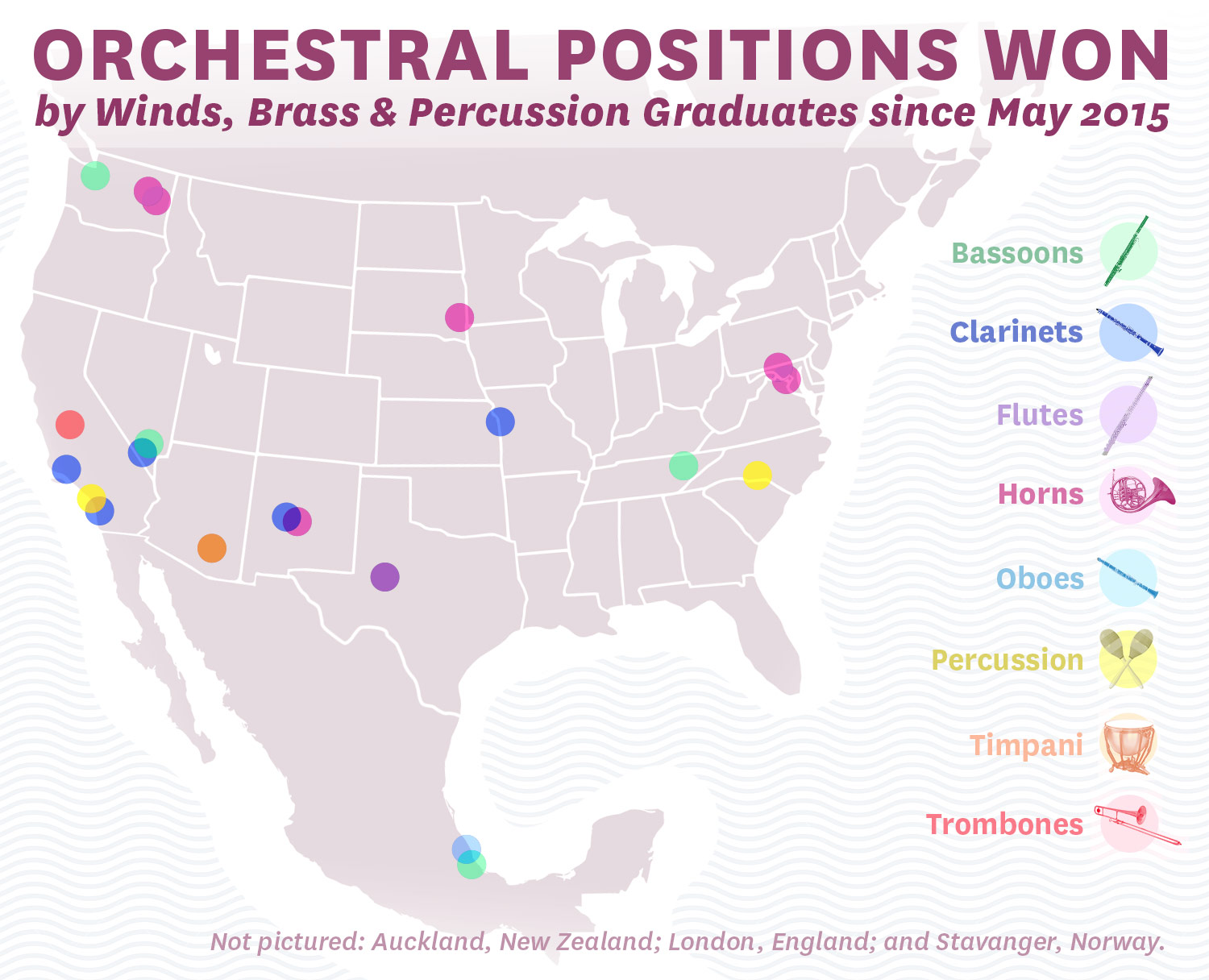 A faculty composed of working musicians, a commitment to mentoring and an education that balances technical proficiency and professional know-how with a broad foundation across disciplines are all factors in why students are succeeding.

“What’s different about Thornton is that we have a working faculty, and it’s because we’re located in Los Angeles that we can offer that to students,” Morrell said. “Our faculty are members of the LA Phil, LA Chamber Orchestra (LACO) and LA Opera and recording musicians on TV, film and video games. We’re sitting on audition committees in orchestras and understand what it needs to sound like.

“It gives a different perspective on instruction and what it is that students need to know,” added Morrell, who won a seat with LACO 20 years ago — six months before finishing her doctorate at Thornton.

“ Our teaching is never over. It’s a lifetime association and mentoring with the students.”

Gilad said that teaching and mentorship are the keys to USC Thornton’s impressive results. “A professor needs to have conviction and pass that along to the students so they create their own personality with all the tools given to them. It’s a long process of ups and downs of the musical world and becoming a better person after that.”

Santos, who won his principal position in Kansas City in a two-day, four-round audition in competition with 100 other clarinetists, called Gilad “a brilliant musician that has so much to offer, and he does so with great generosity of spirit.”

“For anyone aspiring to a career in music performance, it is paramount that you develop the highest level of technical control of your instrument, while still finding a way to be captivating for your audiences,” Santos said. “Your private teacher is by far the most important element in your pursuit of professional success, and Professor Gilad was an indispensable force in my ability to be employed as a performing clarinetist.”

“Our teaching is never over,” Gilad added. “It’s a lifetime association and mentoring with the students.” He regularly takes calls for advice and mentorship from USC Thornton grads around the world. They talk about career moves and what auditions to take, and they come back to campus for “tune ups,” playing for Gilad’s feedback.

That’s one illustration of the Trojan Family commitment. “It’s very special,” Morrell said. “It’s not just the school of music; it’s the whole university. To learn in a place like that means you feel cared about and that we really can mentor every student.”

Browne credits her experience at Thornton for her success in landing the principal horn position in Spokane, where fellow USC Thornton graduate Anne-Marie Cherry (DMA ’15), is assistant principal horn. “Dr. Morrell gave me all the tools I needed to have audition success,” she said. “This includes everything from musical guidance to organizational skills. I doubt I would have won my position without her help.”

Thornton’s conservatory-within-a-university environment also ensures a comprehensive education. “Yes, you need world-class instruction on your instrument to be able to compete and do what you want to do as an artist,” Morrell said, “but you also need a rigorous education that includes math and science. You need networking skills that come from being on a campus where you can participate in a social environment that will help you develop as a person but also help you get along as a professional.”

This diverse environment nurtured Santos’ artistic development. “Whether it was studying scores and listening to endless numbers of recordings in the music library, going to an interesting music theory lesson, or attending lectures about philosophy, biology, or sociology,” he said, “there was always an opportunity to be inspired at USC. I was grateful that I had a wide variety of influences that aided me in my journey to find my own voice as an artist.”

“I’ve heard people say it’s a scary time to be a musician,” Morrell said. “But actually, it’s a great time to be a musician because you get to do it your way. In my career class, I talk about the importance of having different and independent sources of revenue and inspiration. I think it’s good to take an entrepreneurial approach of: What do I love to do, and how can I make this lifestyle work for me?”

Winds, Brass & Percussion Graduates Who Have Won Orchestral Positions Since May 2015