Allan Vogel, adjunct professor, winds and percussion, received a doctorate in performance from Yale University, where he studied with Robert Bloom. He also worked with Lother Koch in Berlin on a Fulbright Fellowship and with oboists Fernand Gillet and Josef Marx. Dr. Vogel is a nationally respected wind soloist and chamber musician. He is the principal oboist of the Los Angeles Chamber Orchestra, has appeared as a soloist with orchestras throughout the country and has been featured at the Chamber Music Northwest, Marlboro, Santa Fe, Aspen, Mostly Mozart, Summerfest, Sarasota and Oregon Bach festivals.

Dr. Vogel has been guest principal oboist with the Boston Symphony Orchestra for concerts in the major European capitals, Carnegie Hall, the Kennedy Center and the Boston Symphony Hall. He has also performed with the Academy of St. Martin-in-the-Fields, the Orpheus Chamber Orchestra and the Berlin Philharmonic. He has often been a guest with the Chamber Music Society of Lincoln Center in New York City and has completed three tours of Japan. Dr. Vogel made his concerto debut at Lincoln Center’s Tully Hall with the New York Chamber Symphony and recorded as a soloist with the Seattle Symphony.

In recent seasons, Dr. Vogel performed concerti by Strauss, Vaughan-Williams, Bach, Amram and Lazarof among others. His discography includes recordings for Delos, Nonesuch, RCA and Dorian. He participated in recordings of the Bach Cantatas with Helmuth Rilling in Germany. His two solo recordings, released on the Delos Label, are entitled Bach’s Circle (baroque sonatas) and Oboe Obsession (virtuoso romantic works). His former students hold many prominent orchestral and university positions throughout the country. Dr. Vogel has served on the advisory board of the American Bach Society. 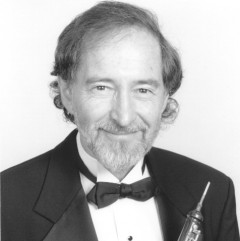