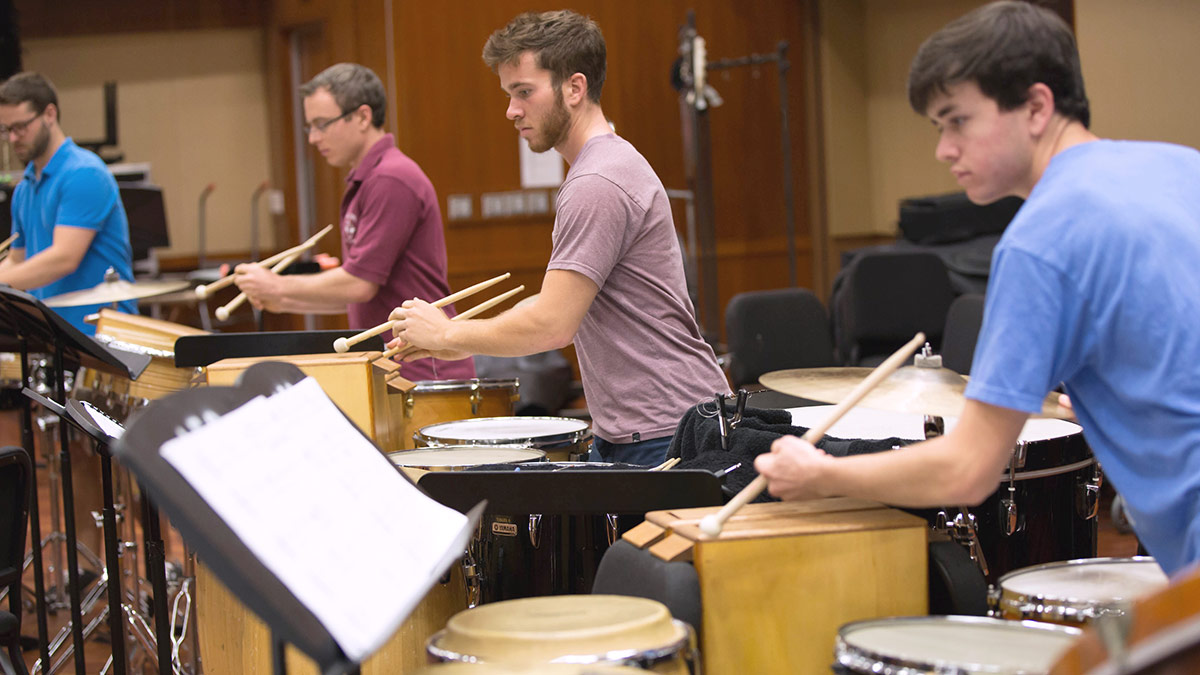 Orchestra jobs are hard to come by—let alone principal chairs. But the Thornton Percussion Studio can boast some major successes as of late. Recent alumni are populating major orchestras around the globe and beating the drum for the USC Thornton School of Music. 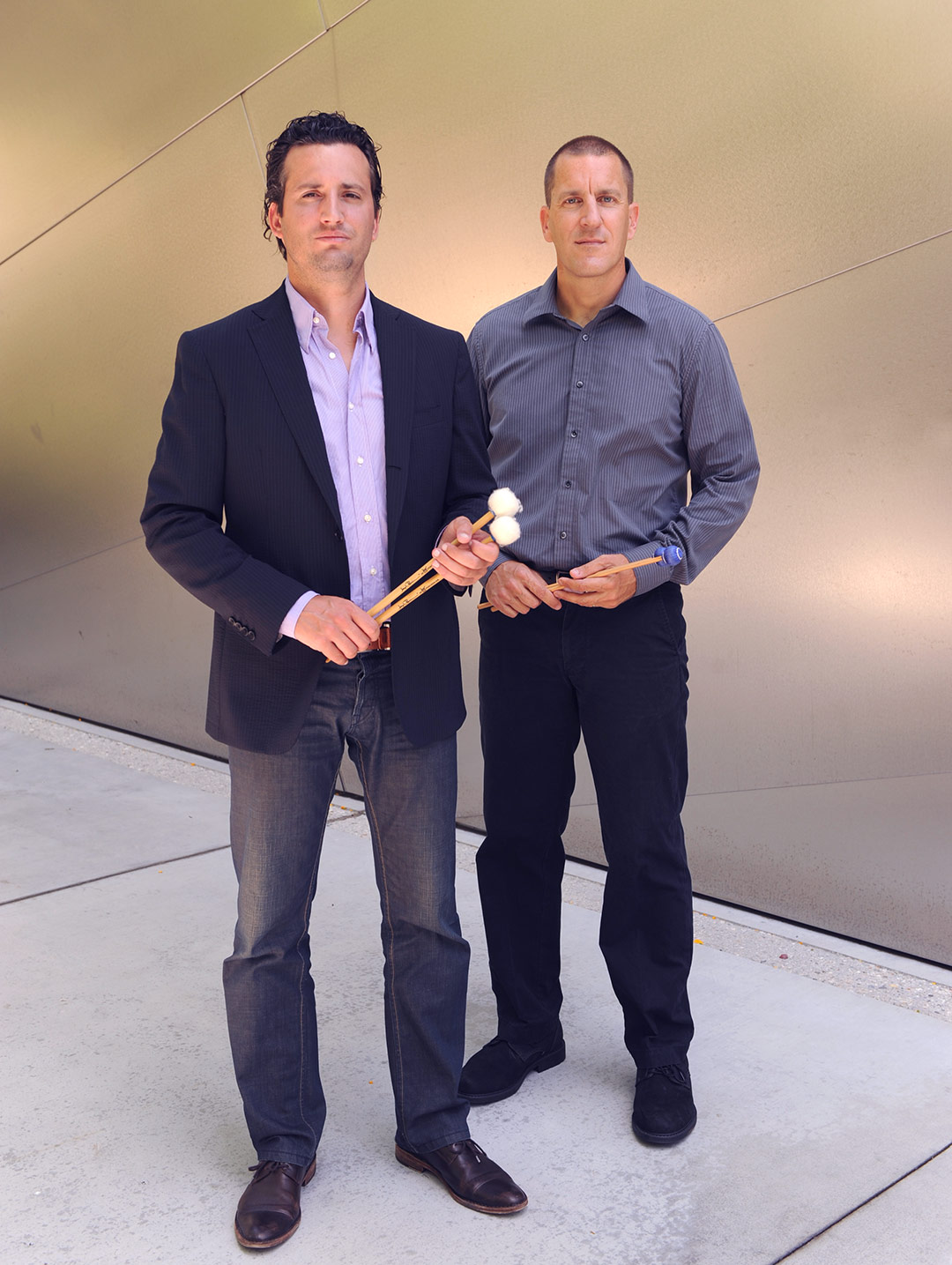 It helps when you learn from the best. Joseph Pereira, director of the Percussion Studio and adjunct assistant professor at USC Thornton, is principal timpanist of the L.A. Phil; and Jim Babor, adjunct assistant professor of percussion at Thornton, is also Pereira’s colleague at the Phil. Many other Thornton faculty members perform with the L.A. Phil, Los Angeles Chamber Orchestra and other acclaimed ensembles.

“I think what makes our program distinctive is the fact that the students study with the principal timpanist and percussionist of the Los Angeles Philharmonic the whole time they are at the school,” said Babor. “This gives them the opportunity to see us play in the orchestra and to learn from our life and musical experiences.”

Howard said that getting a job with his former professors at one of the world’s finest orchestras was “definitely a dream come true” — and Thornton was the right school to get him there. “The level of teaching is so high that [the professors] were able to explain some fundamental things to me that not a lot of teachers can very clearly,” he said. While the East Coast has a solid reputation for percussion programs, he added, “USC is really making a name for itself. It’s going to be a game changer.”

It’s not just alumni that are making impressive contributions. Only an elite student music ensemble could book a professional gig at Walt Disney Concert Hall. As testament to its high caliber of musicianship, the USC Thornton Percussion Ensemble will perform in the Los Angeles Philharmonic’s new music festival, Noon to Midnight, on Saturday, Oct. 1.

“The program we’re doing at Disney Hall is pretty big and pretty ambitious,” said Pereira, who leads the ensemble. 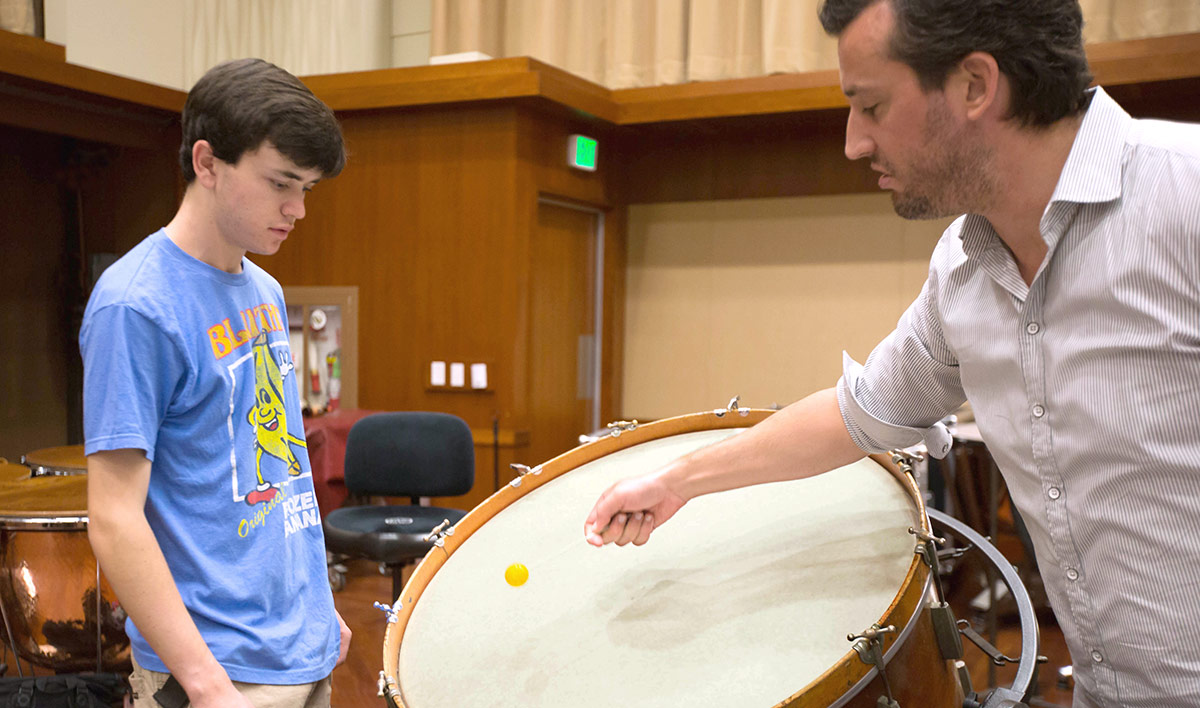 Even though Pereira works with students with varying degrees of professional experience, he has full confidence in their abilities. “My goal from the beginning was to treat them like a professional ensemble as much as possible, to keep the level as high as possible,” he said, “and it’s amazing how they always rise to the occasion.”

For the Noon to Midnight concert, Pereira has programmed three pieces: Rolf Wallin’s Stonewave, George Antheil’s Ballet méchanique and John Luther Adams’ Qilyuan. For the Adams piece, four bass drums will be scattered throughout the rooftop garden to create a surround sound effect.

The Antheil piece will employ nine percussionists and four pianos, performing with a restored silent film from the 1920s. “It’s a massive piece in size and volume,” Pereira said. “It’s one of those pieces where the audience just goes crazy at the end.”

For some compositions, like Wallin’s, the percussionists have to experiment with wood, metal or other objects generally specified in the score to find those that produce the best sound. For metal, that could mean cowbells or car hubcaps. It’s a creative part of the process before rehearsals even start. “That’s the fun of it,” Pereira said. “It can take weeks to iron it out.”

Pereira often brings new music to the Percussion Ensemble, including his own compositions, for performances. He added that the Percussion Studio aims to produce well-rounded players. “Most of the students are interested in an orchestra job, but we don’t push that,” he said. “It’s about having respect for the music, no matter what.”

Pereira and Babor both find it incredibly satisfying to see their students win impressive positions. “This is the whole reason why we teach,” Babor said. “We can push our students to be the best that they can be and help them to realize their dreams of a career in music.”

As students move on, Pereira advises them to keep learning. “I’m still learning,” he said. “You can always learn, you can always dig deeper, you can always change what you’re doing. As a professional player, you have to remain open and curious.”

Even after 24 years in the orchestra, Babor said there is always room for improvement. “Being able to put my techniques into terms that the students can understand is a challenge,” he said. “It forces me to break down and analyze my own playing, which in turn makes me a better player.”