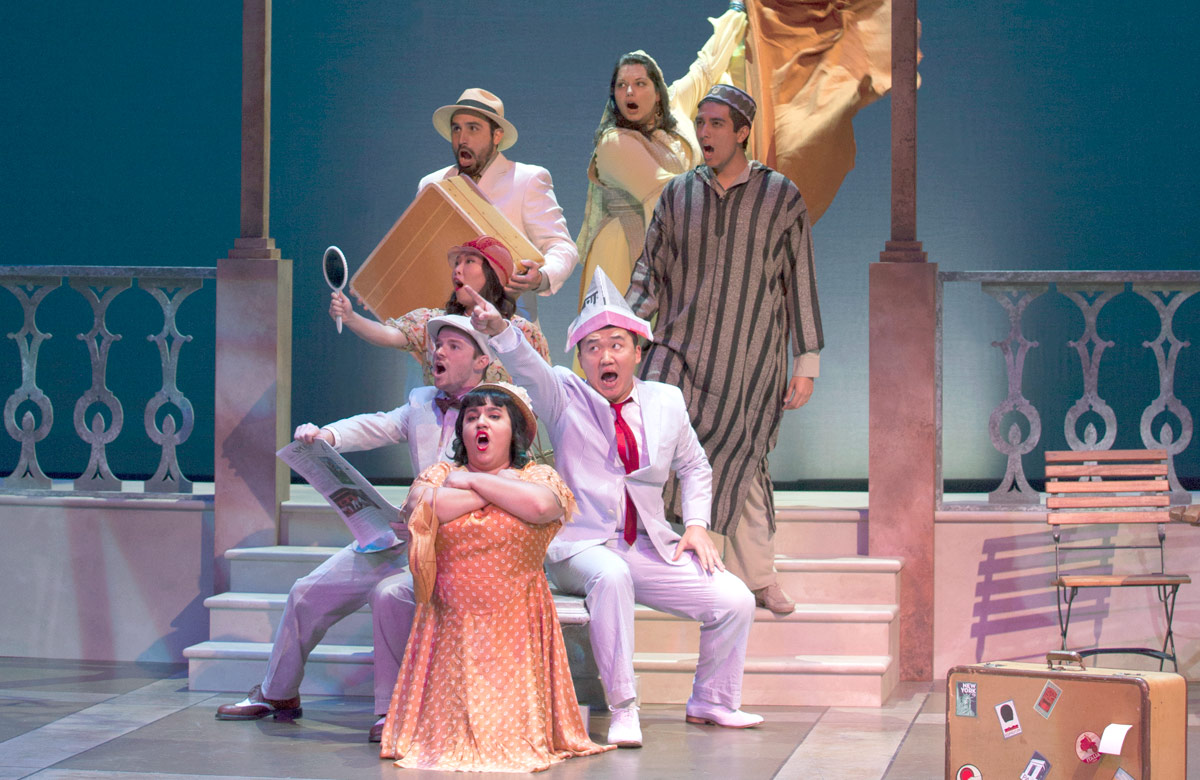 We can all picture it: standing on a train station platform in a strange city, you wait, luggage in hand, not quite knowing when your train might arrive. You feel a tinge of anticipation, measured against the anxiety of being far from home. Perhaps the only other people who can appreciate this moment of uncertainty are your fellow travelers — strangers, but also accomplices on life’s journey.

American composer Dominick Argento seized upon this familiar sense of dislocation for his 1971 opera, Postcard from Morocco, which the USC Thornton Opera program will present in a new production beginning Wednesday. The often-surreal, one-act work contemplates seven solo travelers as they encounter one another in a distant train station for the very first time.

“It’s so unconventional – not just in the musical structure of it, but the way it is put together,” said guest stage director John DeMita, who is on the faculty of the USC School of Dramatic Arts. Set to a libretto by John Donahue, the opera has no discernible narrative, but unfolds like a stream of consciousness, exposing the character’s prejudices and virtues along the way. 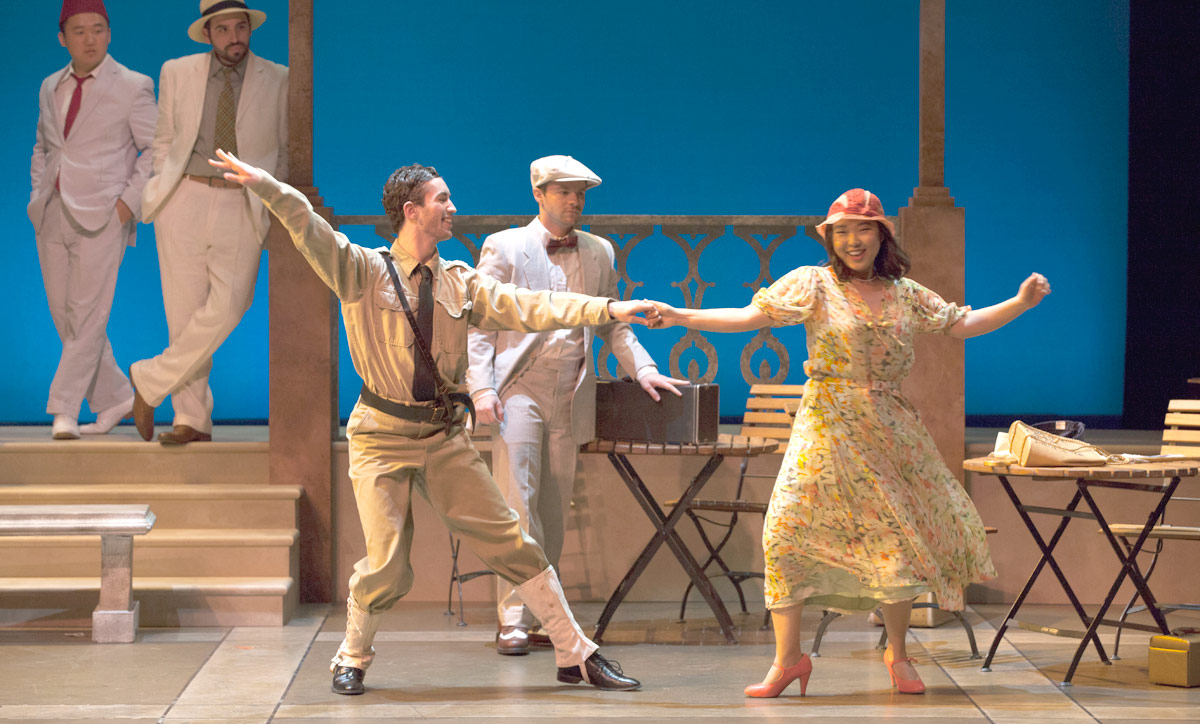 In the foreground, the Officer (Tristan McIntyre) and Lady with a hand mirror (Sunwoo Park) dance, as other characters look on. (Photo by Kristina Jacinth/USC)

Soprano Joanna Ceja, a master’s student in Thornton’s Vocal Arts & Opera program, plays Lady with a Cake Box, one of the opera’s seven enigmatic travelers. “She has this really haunting scene, this aria, where she talks about keeping her lover in a box,” said Ceja. Other characters, such as Man with Old Luggage or Lady with a Hand Mirror, evoke similarly curious obsessions.

“If there’s a narrative to it, it’s that they all really want to know what’s in each other’s luggage,” noted Damien Elwood, manager of the opera program. “This opera is really about people who are stuck in their own isolation and struggling to connect with strangers in a strange place. They’re just terrified to reach out and let other people in—and that’s something I think we can all relate to.” 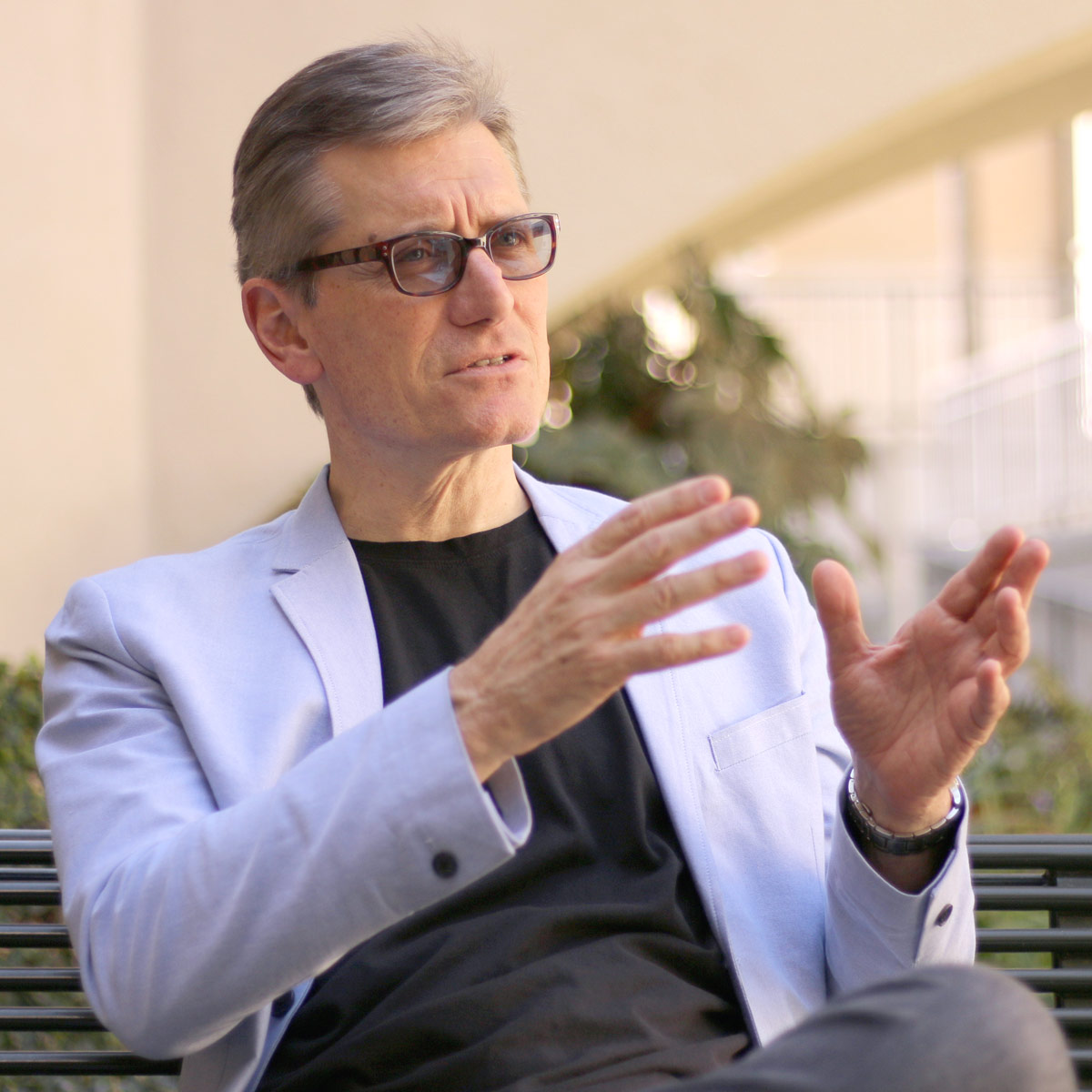 While the opera’s original setting is ambiguous, DeMita has chosen to set the work in Morocco of the 1930’s. “I chose pre-World War II because I wanted the audience to come into something familiar,” he said. “I want them to look at the set and go, ‘oh look, it’s like an old movie. It’s Casablanca.’ Because then, when the singers start doing what they do, it’s going to really send the audience on their ears.”

Much like the opera’s offbeat structure, the music of Postcard from Morocco cascades from the strange to the sublime. “Argento served the surreal aspect of the piece rather brilliantly,” said conductor and music director Brent McMunn. “He anchors the music in many different familiar sounding forms – a cabaret song, a sea shanty, ragtime, operetta, and his own versions of post-modern expressionism – all in a freewheeling and fluid way.”

The breadth of Argento’s musical language has presented new challenges for the cast of students, however, as many are more accustomed to singing Mozart and Verdi. “The music, actually when you’re learning it by yourself, it’s not pretty,” said Ceja. “Sitting there at the piano picking out my part I was like, ‘What – is – this – random – sounding – stuff.’ But no! When it’s all together with everyone, it’s stunning.”

“The piece requires real musicianship of each singer, as well as dramatic creativity,” said McMunn. “I think everyone will shine. Working with our guest director, John DeMita, we’ve become a real ‘troupe.’”

Argento’s sharp-witted score did present DeMita and McMunn with one unique obstacle—a Wagner-inspired orchestral interlude called “Souvenirs from Bayreuth” that is typically cut from most productions. Leaning in to the challenge, the team invited choreographer Caribay Franke (BA ’16), a graduate of the USC School of Dramatic Arts, to transform the six-minute instrumental section into a fantastical, period-inspired dance number.

“In the midst of this train station, you have the whole cast suddenly dancing the Charleston,” said Elwood, referring to the 1920’s dance sensation. “It’s totally delightful and surreal.”

Regardless of the opera’s many eccentricities, Ceja insists that Postcard from Morocco tackles a reality that everyone—and particularly students—can relate to. “The train is late, or who knows, but it hasn’t come yet and we’re in limbo between the place where we are and the place where we want to be,” she said.

“I think that’s a feeling that a lot of 20-somethings can understand.”

The USC Thornton Opera, together with the USC Thornton Symphony, presents Dominick Argento’s Postcard from Morocco in three performances at USC’s Bing Theater, Wednesday, April 18th through Sunday, the 22nd. Admission is free for USC students, faculty, and staff and $18 for the general public.