Thornton student and saxophonist Andrew Harrison (DMA) won the 2013 Sigma Alpha Iota Pasadena Music Scholarship Competition. Harrison currently teaches at the Colburn School in downtown Los Angeles, and serves as artistic director of FIERO. Harrison has performed at locales such as Bass Performing Arts Center and the Disney Concert Hall and featured on the Naxos 2009 album Over the Rainbow and Bach Again which was considered for a Grammy nomination. Harrison is an classical saxophone advocate and has performed with the Thornton Wind Ensemble and Thornton Symphony Orchestra. 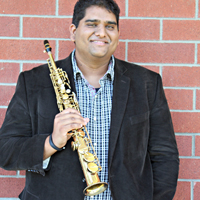