Shulman studied cello and composition at the Royal Academy and the Royal College of Music in London, later becoming the first British winner of the Piatigorsky Artist Award, an honor conferred by the New England Conservatory, Boston. Riccardo Muti appointed him the first chair of London’s Philharmonia Orchestra, and he has since performed as soloist with Sir Simon Rattle, Giuseppe Sinopoli, Semyon Bychkov, Franz Welser-Möst and Esa-Pekka Salonen, among others. Shulman has recorded over 25 CDs as a member of the Britten Quartet, while performing Vivaldi’s cello concertos for Virgin Classics, Janacek’s Pohadka for EMI, and a world-premiere recording of cello compositions by Frederick Delius.

Based in Los Angeles, Shulman served as principal cellist of the Los Angeles Philharmonic for several years, performed chamber music with such luminaries as Imogen Cooper, Jean Yves Thibaudet, John Ogden, Jeffrey Kahane, Stephen Hough, Vladimir Ashkenazy, Lynn Harrell, and Cho-Liang Lin, among many others, and had cello concertos written for him by Christopher Stone, Nathaniel Levisay and Maria Newman. His is a career of many dimensions, including extensive work in television and film music, ranging into concerts alongside the famed German rock/classical guitarist Uli Jon Roth, and his solo turn on Sir Elton John’s recording of Candle in the Wind, in tribute to Princess Diana and parenthetically the highest selling “single” of all time.

“’Technique at the service of music’ sums up my teaching philosophy in a nutshell. I regard it as my duty to inspire my students to strive for and to understand the essence of the work they are performing; to truly get to the heart of the piece and find its essential purity of character, whether it be a light bon-bon of a virtuoso piece, or a towering, monumental concerto. The composer, the creator, has but a limited language to transmit what is in his or her mind. It is our job as musicians, as re-creators, to become the vessels through which that music comes to life. This is a deep and important responsibility. It involves developing an almost limitless palette of sound, color, character, and emotion from which to draw on in our task of communicating to our listeners. Every phrase, every note, must be considered, contextualized, and characterized using the many tools we have at our disposal. Bow stroke, bow division, bow speed, articulation, the many different kinds and speeds of vibrato and shifts, the subtlety of intonation, the grades of left and right hand pressure and weight – all are brought into play to serve us in bringing a phrase to life. Only then can we become actors on the musical stage and ‘give’ the audience the music we have absorbed so thoroughly.” – Andrew Shulman 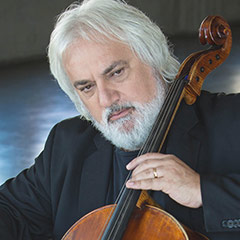