Bernadene Blaha’s command of the piano, whether featured as recitalist, concerto soloist or chamber musician, has been heralded in performances throughout North America, Europe, Australia, Asia and Mexico. Piano and Keyboard magazine reviewed her as “a pianist of integrity, with lovely sonorities and total clarity of line.” Highlights include return engagements at the Piatigorsky International Cello Festival, Newport Music Festival, Los Angeles Philharmonic Chamber Music Series, Worcester Chamber Music Society as well as performances throughout the United States, Canada, France, and Italy.

Blaha first came to international attention as a prizewinner in the Montreal Symphony Orchestra Competition; the Young Keyboard Artists International Piano Competition, Grand Rapids, Michigan; the Masterplayers International Competition, Lugano, Switzerland; and the 11th Annual International Piano Competition in New York City. This latter award resulted in two highly acclaimed recital appearances at Carnegie Recital Hall and the Lincoln Center Library. Soon afterward, she was featured in the opening orchestra concert and a solo recital at the XXIX International Chopin Festival in Marianske Lazne, Czechoslovakia, followed by performances at the Concertgebouw in Amsterdam, the National Arts Centre in Ottawa, the Phillips Collection in Washington, D.C., and Disney Hall in Los Angeles.

Blaha is a founding member of the piano trio Latitude 41, formed in 2009 with violinist Livia Sohn and cellist Luigi Piovano. Their debut CD of Schubert’s monumental “Trio in E flat Major” and “Notturno” was released in 2011 on the Eloquentia label to rave reviews. The group followed this success with a recording of the Saint-Saëns Trios and a CD featuring the Brahms Trios. Her discography also includes recordings for the CBC, Centaur, and Analekta labels.

Originally from Canada and currently residing in Los Angeles, Blaha has been a member of the Keyboard Faculty at the USC Thornton School of Music since 1993 where she is a Professor of Practice. 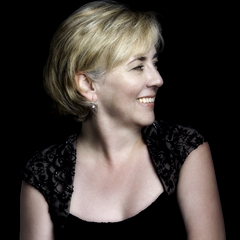