“Bruce Forman is one of the great lights of our age.”
– Barney Kessel, Jazz Times

Forman is a seasoned jazz player with top-level skills as a leader, entertainer and sideman. He creates soulful, lyrical melodies, inventive harmonies, and solid accompaniment. Though he can shred bebop at blistering tempos with the best of ‘em, he is no urban snob. Cow Bop, Forman’s unique “western bebop” band, hit four separate charts with its CDs, Swingin’ Out West, Route 66, Too Hick for the Room and Cowlifornia Swing. Having won the Route 66 Challenge three times with Cow Bop, he created a linear music festival in 2013 at the USC Thornton School of Music, called Music Licks on 66, establishing a new paradigm for touring and the use of social media, included in a mentoring model that is both innovative and collaborative.

Forman also has long-standing experience as a distinguished music educator and in-kind philanthropist. His national music-mentoring program, JazzMasters Workshop, provided over 2,500 sessions for young students. Always free of charge, JazzMasters’ sessions occurred during after-school hours, and the program enriched lives and helped develop numerous musicians who have gone on to promising careers.

A new composition, The Red Guitar, has received wide acclaim. It may be the only jazz libretto where the narrator and the featured instrumentalist are the same performer. The Red Guitar requires great virtuosity, but it is much deeper than a simple showcase for Forman’s abilities. It is serious one-man theater, exploring the obsessive demands that music places on its truest followers.

Bruce’s life and musical journey provide an American saga that is still in full swing. His Texas origins, his early career in San Francisco and New York, and his years on the road, all contribute to the unique and highly personal vision that he demonstrates today. Deep immersion in American culture inspires him to contribute to the traditions that he drew from.  Cow Bop’s “road challenges” down historic byways like Route 66; original works like The Red Guitar; JazzMasters Workshop—these are only the latest answers to the endless question that underlies Bruce Forman’s creativity. His music and life reflect every step of his journey, and demonstrate the awareness of an artist who’s very much at home in the world, and at the top of his form. 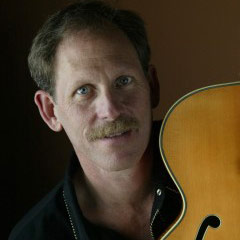