At age seventeen, Rhodes made her debut with the Philadelphia Orchestra and later performed many times under the baton of Eugene Ormandy as well as numerous guest conductors.  Since that time she has performed as soloist with orchestras including the Los Angeles Philharmonic (with conductors Simon Rattle and Edo de Waart), the Phoenix Symphony, the Pasadena Chamber Orchestra, the South German Radio Orchestra, and the Orchestra of the French National Radio.

From 1972-1975, Rhodes taught organ at the Peabody Conservatory in Baltimore.  During this time she was Artist-in-Residence at All Souls Church, Unitarian in Washington, D.C., where she gave recitals and frequently premiered new music.  Numerous composers have written and dedicated works to her, and she has edited several compositions as well.  These include Ascent by Joan Tower (Associated Music Publishers, Inc.), Prelude and Variations on “Old Hundredth” by Calvin Hampton (Wayne Leupold Editions, Inc.), Meditations on “Salve, Festa Dies” and Chorale, Diferencias and Glosas on “Puer Natus in Bethlehem” by Joseph Walter (Composer’s Library), and Larry King — The Organ Music for solo organ and organ and tape (Wayne Leupold Editions, Inc.)

Rhodes has recorded for Columbia Records with Eugene Ormandy and the Philadelphia Orchestra.  Everyone Dance, her critically acclaimed solo recording on the Pro Organo label, has been hailed by The American Organist as “A joyous celebration of unrivaled artistry!”   She has been featured on the CDs Pipedreams Live! (Minnesota Public Radio), Comes Summertime (JAV Recordings), Historic Organs of Boston (The Organ Historical Society), Jean Guillou — Colloques (Augure), Cherry Rhodes…Live (Pro Organo), Cherry Rhodes in Concert and Cherry Rhodes at the Kimmel Center (Delos Productions, Inc.). Many of her performances have been broadcast throughout North America and Europe.

Rhodes is a graduate of the Curtis Institute of Music, where she studied with Dr. Alexander McCurdy.  She received Fulbright and Rockefeller grants for studies in Munich with Karl Richter and in Paris with Marie-Claire Alain and Jean Guillou, who invited her to be his assistant for two years at St. Eustache.

Rhodes, Adjunct Professor of Organ, has taught at the Thornton School of Music since 1975.  Many of her students have won awards, grants, and top prizes in competitions in the United States and Europe. A sought-after musician, she gives master classes and frequently serves as adjudicator for competitions in North America and Europe. 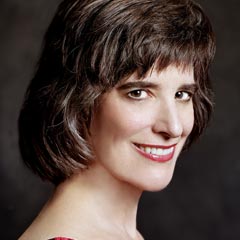 During her brilliant career Cherry Rhodes has toured extensively throughout the major music capitals of America and Europe with recitals in cathedrals, churches, and concert halls.