Christian Amonson is a recording engineer and producer specializing in acoustic music. Projects include John Williams and the Chicago Symphony Orchestra, Midori and the Kansas City Symphony, the Academy of St. Martin in the Fields at Abbey Road Studios in London and NPR’s JazzSet at the Kennedy Center, as well as groups like the LA Master Chorale, LA Opera, Pacific Chorale, Baltimore Symphony, Virginia Symphony, the Washington Bach Consort, Choral Arts Society of Washington and others. Amonson volunteers as the mastering engineer for And We Were Heard, an initiative focused on sharing works of underrepresented composers.

From 2014-2019, Amonson served with The President’s Own United States Marine Band in Washington, D.C., producing albums, concert recordings, videos and live sound reinforcement. He participated in the 2017 Presidential Inauguration, PBS’s Emmy-winning “All-Star Band” and various events at the White House. During the COVID-19 global pandemic, he founded VirtualChoir.net and led a team of 55 singers, composers, conductors, instrumentalists and administrators in the creation of over 1,700 virtual performances for ensembles around the world.

His teachings and recordings are unified in the seeing sound approach, which emphasizes the purpose of our ears: to tell us where things are. Amonson has presented clinics for groups like the National Symphony Orchestra and Washington National Opera, masterclasses for universities around the country and presentations on the fundamentals of orchestral recording for the League of American Orchestras. He trains and mentors engineers through his production company, Arts Laureate, and in 2022, he began teaching Mixing for Screen Composers in the USC Thornton Screen Scoring program.

Amonson won his first recording contract as an engineer at age 20, selected after the Virginia Chorale auditioned the most experienced classical engineers in the mid-Atlantic region. He received his first major label credit at 21 for Bruce Hornsby’s album Elevate. Before founding Arts Laureate, he proofed and catalogued 10,000 albums for the Classical Music Library Online, Jazz Music Library Online and World Music Library Online. 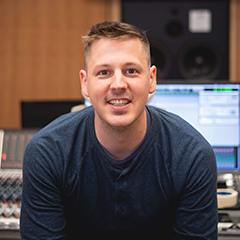