Joseph Pereira leads the USC Percussion Group in an evening of music in Newman Recital Hall featuring work by Tōru Takemitsu, Iannis Xenakis, and William Kraft. This event has been rescheduled from the original date of Mon., Nov. 7. 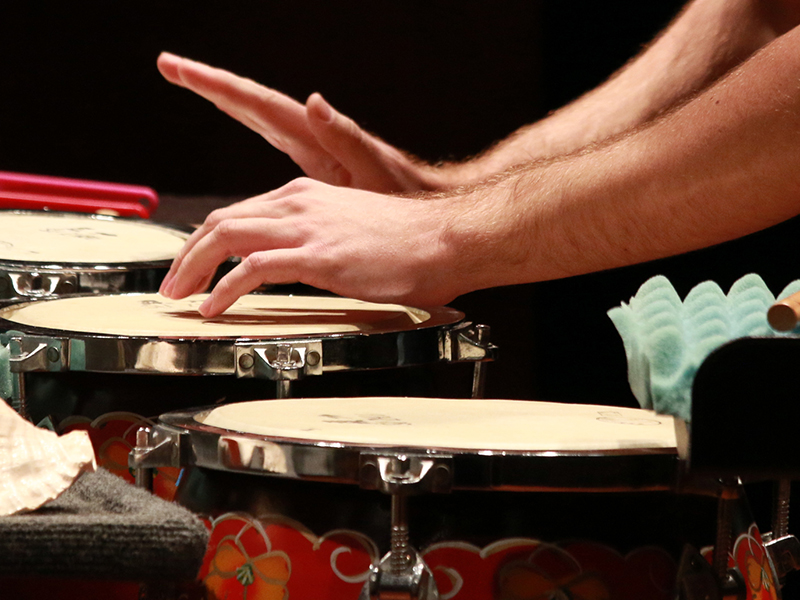 There are three compositions by Takemitsu on the subject of the Rain Tree. Rain Tree Sketch (1982), and Rain Tree Sketch II (1992, in memoriam Olivier Messiaen), are among Takemitsu’s most often performed piano works. The origin of the Rain Tree Sketches can be traced back to Takemitsu’s percussion trio Rain Tree (1981). Rain Tree is used as a metaphor of water circulating in the cosmos, and Takemitsu employed Messiaen’s modes of limited transposition in order to construct the pitch collections evocative of cosmic imagery. Takemitsu’s goal as an artist was to expand the possibilities of music, and to express himself through creation of a universal language. The title was suggested by a passage from the novel Atama no ii, Ame no Ki by Kenzaburo Oe: “It has been named the ‘rain tree,’ for its abundant foliage continues to let fall rain drops collected from last night’s shower until well after the following midday. Its hundreds of thousands of tiny leaves – finger-like – store up moisture while other trees dry up at once. What an ingenious tree, isn’t it?”

Composed to celebrate the French bicentennial, Okho is scored for three performers on djembes and bass drum, and was premiered at the Paris Autumn Festival on October 20, 1989. Xenakis first encountered the West African djembe in the studio of trio le cercle, to whom the work is dedicated. Okho finds a rare balance between the visceral and cerebral, creating a kind of tribal modernism. The work is in eight sections featuring extremely limited rhythmic material recombined in solos, duos and trios.

We will be performing the common arrangement of the piece for multiple drum set up similar to his pieces Rebonds (1989) and Psappha (1975).

Two of the five poems on which Des Imagistes (1974) is based are by Ezra pound; the other three are by poets, E .E. Cummings, Everett Frost and Barbara Kraft and are profoundly concerned with and influenced by Pound’s works and aesthetics. The poems were chosen particularly for their imagery and musically evocative substance.

Des Imagistes was originally titled Hexagrammoid, because the number 6 played such an integral role in the concept of the piece, many families of six instruments; pitched instruments grouped into complimentary hexachords; and many physical and acoustical considerations derived from aspects of the hexagram, e.g., the second poem “Sestina: Altaforte” being essentially set as a double trio between players I-III-V and II-IV-VI.

The title Des Imagistes, taken from the anthology of that name put together by Pound: “An `Image’ is that which presents an intellectual and emotional complex in an instant of time…It is the representation of such a `complex’ instantaneously which gives that sense of sudden liberation; that sense of freedom from time limits and space limits…”

For Kraft, the desire was to put into sound what the poets had put into words: to capture the colors and auras of Cummings’ “stinging gold”; the clangorous mentality of Pound’s medieval warrior in “Sestina: Altaforte”; the suspension of materiality in Barbara Kraft’s “Strung on Some Unseen Web”; the gentle expression of loss in the work of Pound scholar Everett Frost in his “11/2/72: E.P.” (the date of Pound’s death).

Des Imagistes was commissioned by the Percussive Arts Society for performance at its national festival, March 26-27, 1974.

Tonight we want to honor the life and legacy of William Kraft, who passed away recently at the age of 98. Bill was a member of the Los Angeles Philharmonic for 26 seasons starting in 1955, first as a percussionist, and then as the principal timpanist. He was the composer in residence from 1981-85, and also associate conductor during the Zubin Metha era. After this he went on to win multiple awards and commissions, score movie soundtracks, and teach composition at major universities. Bill’s impact on the Los Angeles new music scene and the percussion world is immeasurable. Bill basically was the impetus for putting Los Angeles on the map as a hotspot for contemporary music. His association spans well over 5 decades and we can say he is partially responsible for the new era of what a modern American orchestra looks like and how it functions in today’s world. We dedicate this performance tonight to the work and legacy of William Kraft.