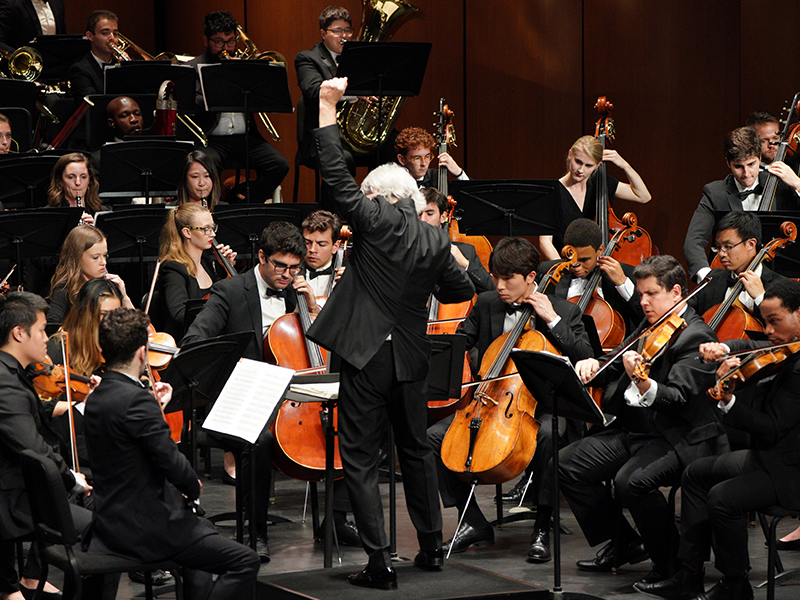 In 1879, Johannes Brahms was awarded an honorary degree of Doctor of Philosophy by the University of Breslau. Brahms was delighted by this and sent his letter of thanks to the faculty. This letter of thanks was quickly followed by a letter from Brahms’ friend Bernhard Scholz who was the Director of Music at Breslau. In his letter, Scholz explained that the university had requested a musical expression of his gratitude. In the summer of 1880, Brahms amended his previous thank you with the addition of an orchestral work, the Academic Festival Overture. Brahms conducted his work at the premiere in Breslau on January 4, 1881.

Brahms described his work as, “a very boisterous potpourri of student songs”. This piece includes excerpts from four student “beer-hall” tunes. Each of these tunes are incorporated at certain points of the work. The overall structure of this piece consists of four continuous sections: Allegro, Maestoso, Animato, and Maestoso. The first section of the overture is an Allegro section that starts with a quiet yet urgent statement followed by contrasting dynamics and musical ideas. Brahms also included and modified one of his favorite tunes from his childhood– Rakóczy’s March– into the first section of this overture. As the strings gather in an exuberant run, the overture goes into the second section, the Maestoso. After a growing drumroll, three trumpets sound the first of the students’ songs: “Wir hatten gebauet ein stattliches Haus” (We have built a stately house). Brahms mixes and refashions both this traditional song and Rakócvy’s march. After he develops the mixture of these themes, “Der Landesvater”(The father of our country) is introduced into the overture by the violins and violas. The Animato section starts with another traditional student song called, “Was komm dort von der Höh’ ” (What comes from afar) which is more commonly known as “The Fox-Ride ”. The bassoons lead in with a syncopated accompaniment by the violas and celli. The development consists of the three student songs in succession. The last Maestoso section, the finale, modifies the fourth student song which is “Gaudeamus igitur” (Therefore, let us be merry). This final song creates an exuberant finale with the full, fiery sound of the orchestra.

Three Black Kings was premiered in a tribute concert for Duke Ellington in 1976. After the piece premiered, Alvin Ailey choreographed a ballet to accompany the piece, performing this piece throughout their 1976/77 season. One of Ellington’s close friends Maurice Peress, an esteemed conductor, rescored it for symphony orchestra after its premiere. Mercer Ellington stated that this piece was a “eulogy for Martin Luther King Jr.”.

Three Black Kings is comprised of three movements, each with its own thematic and psychological development. Each movement represents a king from the past. The first movement is a tribute to King Balthazar (the black king of the Christian Nativity) which is represented through a driving, percussive sound that blossoms into stunning, lush melodic material in the strings. The second movement represents wise King Solomon, shifting back and forth between passionate melodies from the strings and upbeat passages from the winds and brass, reminiscent of Ellington’s jazz orchestras. The last movement is heavily influenced by the gospel music tradition and is dedicated to Dr. Martin Luther King Jr. Through Ellington’s references of renowned kings from the past up to his own time period, he honors Dr. King, and signifies his great leadership.

Béla Bartók’s Concerto for Orchestra was written during a difficult time in his life. In 1943, he was hospitalized for an illness which the medical staff thought was tuberculosis, but would eventually be diagnosed as leukemia. He was in a New York hospital when he was visited by Serge Koussevitzky, conductor of the Boston Symphony, who came with a commission for a work in memoriam to Koussevitzky’s deceased wife, Natalie Koussevitsky. Bartók was diagnosed with leukemia soon after he was commissioned for this work. He wrote and finished the score at the health resort of Saranac Lake in upstate New York.

This piece was irregularly titled Concerto for Orchestra. Traditionally, a concerto is written for a solo instrumentalist with an orchestral accompaniment. Bartók titled his piece a concerto and not a symphony due to the soloistic and virtuosic qualities that each section of the orchestra produced. It was met with tremendous success at its premiere by the Boston Symphony Orchestra on December 1, 1944.

Bartók revised the ending of the last movement in February 1945. While both endings are still performed, the slightly longer revised ending is considered to be the standard performance practice.

Excerpt from Bartok’s program notes at the premiere:
“The general mood of the work represents, apart from the jesting second movement, a gradual transition from the sternness of the first movement and the lugubrious death-song of the third, to the life-assertion of the last one… The title of this symphony-like orchestral work is explained by its tendency to treat the single orchestral instruments in a concertant or soloistic manner. The ‘virtuoso’ treatment appears, for instance, in the fugato sections of the development of the first movement (brass instruments), or in the perpetuum mobile-like passage of the principal theme in the last movement (strings), and especially in the second movement, in which pairs of instruments consecutively appear with brilliant passages.”