David Howard, adjunct associate professor of winds and percussion, has been a member of the Los Angeles Philharmonic since 1981 when he was hired by then music director Carlo Maria Giulini. He has performed and given masterclasses at international festivals in Tel Aviv, Vancouver, Helsinki, Beijing, and Stockholm. He and a small contingent of Philharmonic colleagues coached and gave masterclasses in Caracas under the auspices of El Sistema.

With the Los Angeles Philharmonic New Music Group, Howard performed as soloist in John Harbison’s Concerto for Oboe, Clarinet, and Strings under the direction of the composer; he was also the bass clarinet soloist in Iannis Xenakis’ Échange, conducted by Esa-Pekka Salonen. Previously, Howard was principal clarinetist with the New Jersey Symphony and the New Haven Symphony.

Music of Stucky, Salonen, Ustvolskaya and Brahms on the Yarlung label 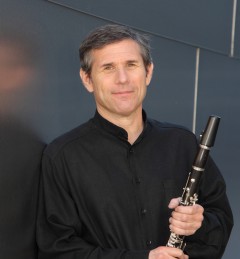