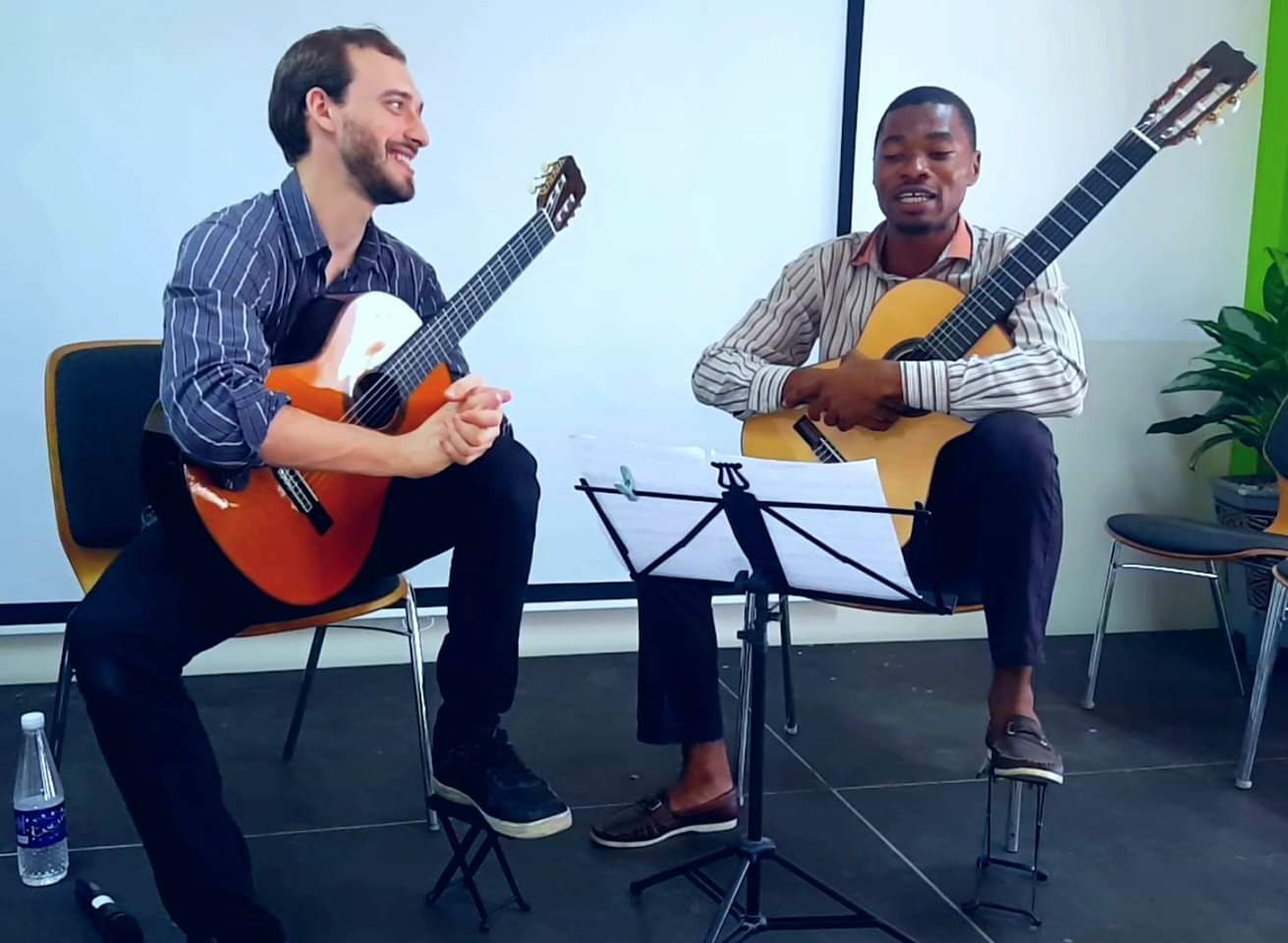 In Nigeria, Mircea Gogoncea held workshops where students had the opportunity to take part in a lesson with other students in the audience. For some, this was their first one-on-one lesson. (Photo courtesy of Mircea Gogoncea)

Doctoral candidate Mircea Gogoncea organized an international fundraiser to send instruments to musicians in Nigeria, only to realize it would cost less if he delivered them himself.

Sometimes, you just have to deliver a guitar in person, especially when it’s to another continent.

Taiwo Adegoke had never received a formal music lesson. Still, he had developed into an impressive classical guitarist. Having taught himself over the years, he now instructed a group of seven devoted students. But in a country with almost no access to professional guitar instruction, he knew he could only advance so far on his own. 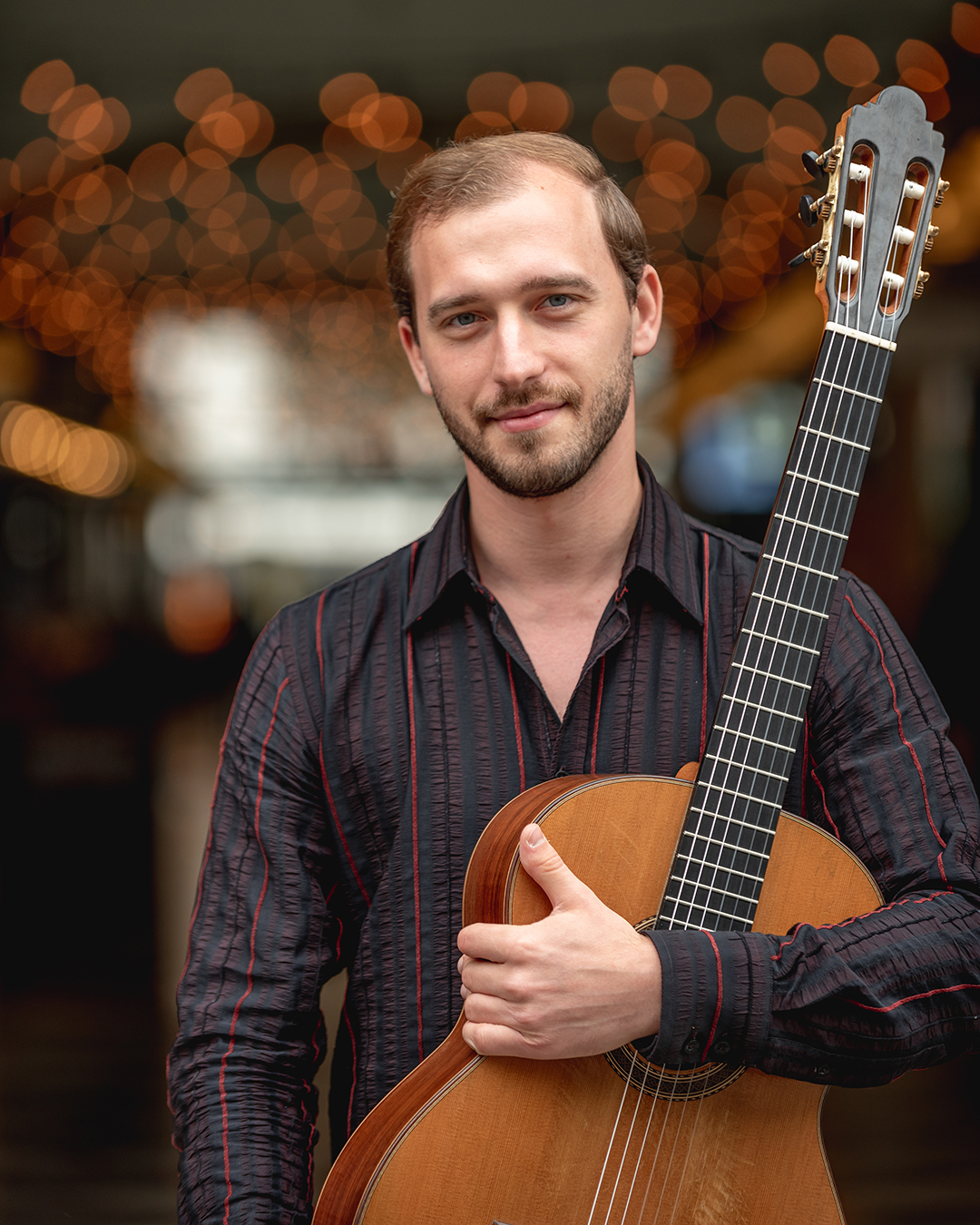 “I could really empathize with them,” Gogoncea said. “I’m also from a relatively poor family in Romania, the second poorest country in the E.U.”

Yet it put things in perspective. Despite his modest background, Gogoncea, as a citizen of the European Union, had been able to move to Germany to study music. He’d gone on to obtain multiple graduate degrees from conservatories and universities throughout Europe. In short, he had all the advantages and formal training that Adegoke lacked. So Gogoncea volunteered to teach the Nigerian guitarist over the internet.

During their correspondence, Gogoncea discovered that Adegoke was using a steel-string guitar on which he’d installed nylon strings. This makeshift instrument was far from ideal, and Gogoncea set out to find him a proper classical guitar.

“I launched an appeal to every single musician I knew,” Gogoncea said, “every guitarist around the world, every teacher, and asked if anybody had a guitar they could spare. And because the classical guitar world is not a huge one, quite a few people responded and offered really good instruments.”

One was from family-owned Spanish guitar producer Ramírez Guitars. It was a quality instrument, and the Ramírez family had experience in packing and shipping to other countries.

“We had to transport it from Spain to Nigeria,” Gogoncea said. “Now geographically these places are not too far apart, but they’re in different worlds.”

What seemed like a simple task soon proved labyrinthine. In order to avoid the Nigerian government levying an excessive luxury tax, which Gogoncea estimated was more than the value of the guitar, it had to be classified as a donation. That involved a nearly impossible series of bureaucratic obstacles, including making an appointment with the United Nations and contacting the office of the Nigerian president.

He found a way to bring the shipping and taxes down to about $600. He crowdfunded the money, and the guitar made its lengthy two-month voyage.

Mircea performs a concert in Mumbai, one of six performed in India to raise funds for the trip to Nigeria. (Photo courtesy of Mircea Gogoncea)

Before long, Gogoncea was faced with a happy problem. A musician in India volunteered a second Ramírez guitar, and the instrument seemed perfect for Adegoke’s most advanced student, Olushola Hamilton. But Gogoncea had exhausted his crowdfunding capital on the first guitar.

Not to be deterred, he organized a fundraising concert at the university he was attending in Germany. However, joining forces with the university meant doing things by the book. He would have to declare the full value of the guitar when it shipped. Now instead of several hundred dollars, it was going to cost several thousand. He realized the concert wouldn’t raise enough.

That was when he checked flights and discovered it would cost half as much to fly to India, pick up the guitar, deliver it to Nigeria, and fly home to Germany.

“So we started organizing this crazy trip,” Gogoncea said. “I would get to meet the guys in real life and also work with them as their first ever professional teacher.”

The fundraising concert was still not going to cover all the costs, so Gogoncea reached out to the Goethe Institute—a worldwide association of German cultural centers—as well as friends in India, and set up a tour to raise additional money. 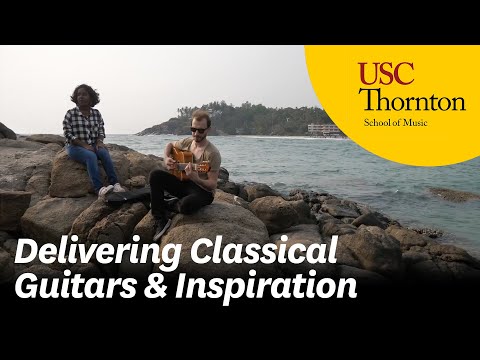 He planned and organized the trip in five weeks. Then he set off for India, collected the guitar and played concerts in six cities across the country.

Along the way, he received good news: “While I was on tour in India, I actually got my response from USC that I would be offered a teacher’s assistantship and start studying my doctorate.”

He was in a buoyant mood to face the many challenges that arose. For example, on his flight departing India, the airline wouldn’t let him carry on the guitar, and he wasn’t going to risk checking it in. “I sorted it out by showing them a newspaper article about my tour, which described me and my project in very kind words,” he said. “They were impressed by the clipping and ultimately let me through.”

Gogoncea did more than just hand over the guitar in Nigeria. Together with the Goethe Institute in Lagos, he organized three full days of events. 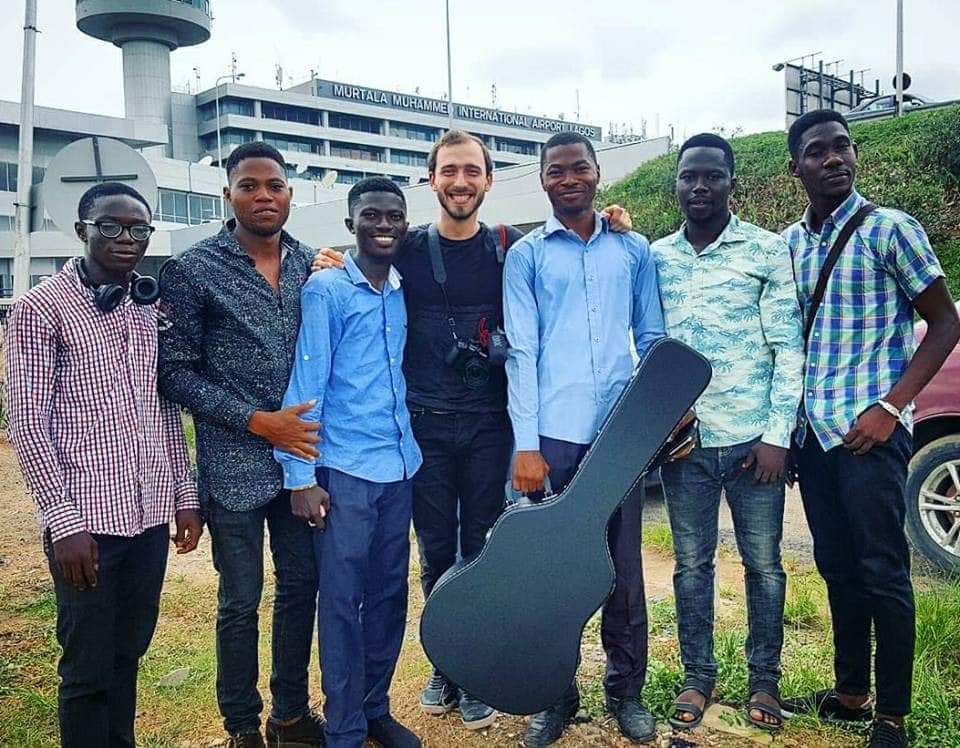 Gogoncea with Adegoke and his students after arriving in Lagos. (Photo courtesy of Mircea Gogoncea)

He worked with Adegoke, his group of students, and anyone else interested in showing up. He distributed an assortment of essential gear, like strings, tuners, metronomes, and nail care kits. During his time there, Gogoncea put on eight master classes, six lectures, and several Q&A and jam sessions.

They capped it off with a concert, where Gogoncea, Adegoke, and Hamilton shared the stage together.

“It’s kind of surreal to play your first concert in public only two days after your first real lesson,” Gogoncea said. “But obviously [Adegoke] could already play the guitar. It’s not like he was a complete beginner. He’d been teaching himself and teaching others for many years.”

All of the students advanced their skills. And Adegoke took a step toward his dream of becoming a professional guitarist. “The program enlightened me on how to be a better musician,” he said. This year, he built upon what he learned, using his newfound technique to gain admittance to the Camino Artes Guitar Workshop in Spain. 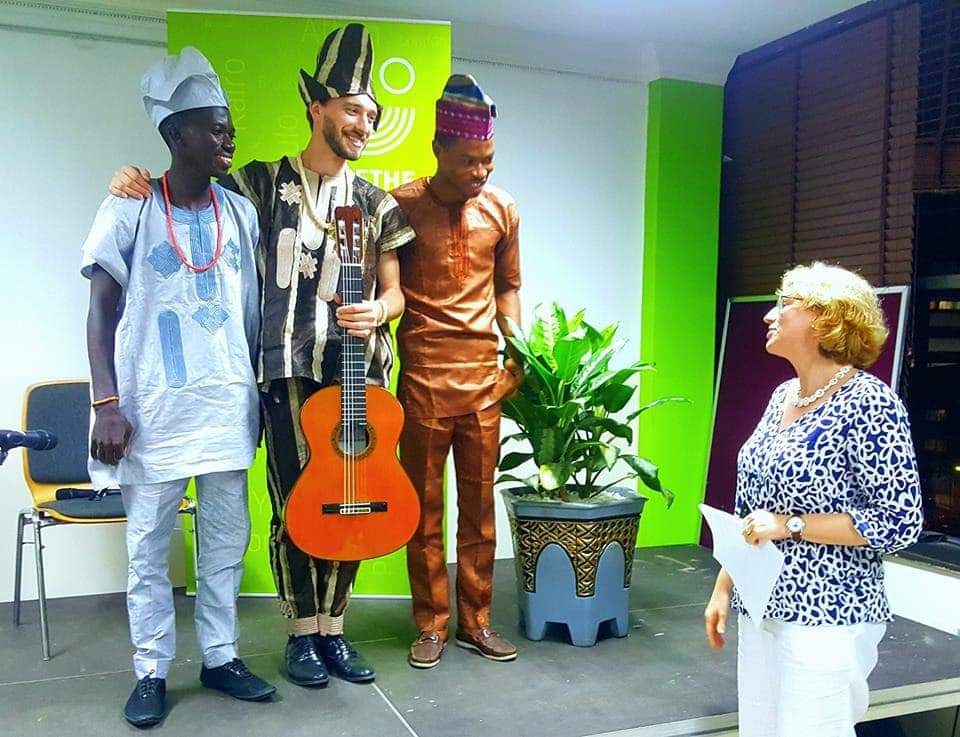 Gogoncea, Adegoke and Hamilton performed together after lessons and workshops. (Photo courtesy of Mircea Gogoncea)

Next week, Gogoncea will return to Nigeria during Thanksgiving break to volunteer again. Through support of the Goethe Institute and his fundraising efforts, two more guitarists will join him.

He’s created a GoFundMe page to help with the costs. 100% of the donations will go towards funding the project and purchasing more instruments and parts for workshop participants.

Gogoncea plans to expand the program and make it a regular occurrence. In the future, he hopes to bring some of his new friends from USC Thornton.

“The more funds we manage to raise,” he said, “the more people we will bring, and the more the guitar scene and the classical music scene will flourish in that country. These people have an amazing need, a great gift, and so much devotion for what they do.”