Eric Pham is a composer, multi-instrumentalist, recording producer and engineer based in Los Angeles. He received a Bachelor’s Degree in Music Production from Cal Poly Pomona, a Master of Music in Composition from the Bob Cole Conservatory at CSULB, and is currently working toward a Doctor of Musical Arts in Composition at USC.

Having played in groups ranging from rock bands to classical ensembles, engineered and produced albums from both pop and art genres, and received an education by apprenticeship under renowned record producers and through graduate studies, Pham has infiltrated, and been influenced by, both popular music and art music. His unique sound stems from his concern with existing within this grey area between genres, embracing a musical language that reflects his energetic and multifarious time and community. As a result, much of his work requires motley ensembles, electronics, and multiple media. 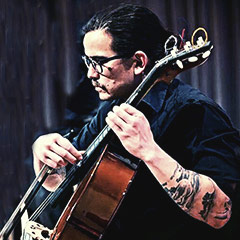