Ginny Luke, adjunct instructor in USC Thornton’s Popular Music program, is a dynamic violinist and vocalist. Equally as comfortable in concert halls as giant arenas, Luke has both performed internationally to millions of people across the globe and alongside some of the biggest names in the music industry as a powerhouse vocalist, violinist and bandleader.

Luke was featured as the lead vocalist and electric violinist on the international 4UPrince Tour directed by Questlove in September 2018 – May 2019 and the Dr. Dre Orchestral Tour Aug. 2019. She was a member of GRAMMY-Award winning artist Meat Loaf’s band, The Neverland Ex-press, as featured violinist and vocals from age 19-21, toured internationally and recorded on Meat Loaf’s “Hell in a Handbasket” album. She rejoined The Neverland Express in 2020 as lead female vocal-ist in the “BAT Experience” on the west coast tour.

She co-manages electric string quartet SAGA Strings and country fiddle duo Gin & Lace. SAGA has performed with SAGA on the Tonight Show with Jay Leno with Daughtry, the Latin Gram-mys 2013 with Ricky Martin, Miguel Bose, and Laura Pausini, and has toured Europe, the UAE, and South America.

Luke studied violin performance at the Colburn School of Music, keyboards and vocals at Musician’s Institute, and violin performance at California Institute of the Arts. She has appeared as a violin soloist performing Mendelssohn Violin Concerto in E minor with the Waterloo/Cedar Falls Symphony Orchestra, Haydn Sinfonia Concertante with the Colburn School of Music’s Orchestra de Camera, and debuted at Carnegie Hall at age 16 on radio show “From the Top.” She studied classical violin under the tutelage of Doris Preucil, Sally O’Reilly, William Preucil, Jr., Hal Grossman, Dr. Chan Ho Yun, and Mark Menzies. 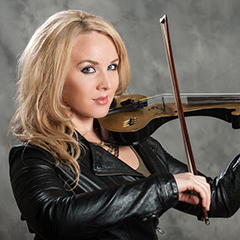