After more than three decades of service as concertmaster of the New York Philharmonic, Glenn Dicterow joined the faculty of the USC Thornton School of Music in 2013 as the first holder of the Robert Mann Chair in Strings and Chamber Music, forging a new chapter in a distinguished, multifaceted career. In March 2022, he was named the Jascha Heifetz Chair in Violin at USC Thornton.

Besides his first chair duties, Dicterow performed as soloist with the New York Philharmonic annually, his renditions of Mozart, Brahms, Bruch and Bartok balanced by more recent concerti by Korngold, Rózsa and Szymanowski, plus contemporary compositions such as Aaron Jay Kernis’s Lament and Prayer and Karel Husa’s Violin Concerto. Highlights include the orchestra’s 1982 performance at the White House with Dicterow as soloist, a 1986 tour performing Leonard Bernstein’s Serenade After Plato’s “Symposium,” under the composer’s baton, and a 1990 performance of Waxman’s Carmen Fantasy, after Bizet, led by Zubin Mehta and shown on a PBS Live From Lincoln Center telecast.

Dicterow has participated in such leading chamber music festivals as those of Santa Fe, Seattle and Bowdoin, among many others. He is also a founding member of the Lyric Piano Quartet and the Amerigo Trio. His wide discography includes two separate New York Philharmonic recordings of Scheherazade, one led by Kurt Masur, the second by Yuri Temirkanov. His New York Legends recital includes the premiere recording of Bernstein’s Sonata For Violin and Piano, while his recording of Mozart’s Sinfonia Concertante, in collaboration with violist Karen Dreyfus and the Warsaw National Philharmonic Orchestra, is paired with William Thomas McKinley’s Concert Variations, written expressly for those forces. His music making extends to performing solos in the scores of such movies as The Turning Point, Altered States, Aladdin, Beauty and the Beast, and Interview With the Vampire.

The recipient of the Bronze Medal in Moscow’s International Tchaikovsky Competition of 1970, Dicterow studied under the tutelage of Erno Neufeld, Eudice Shapiro, Naoum Blinder, Manuel Compinsky, Henryk Szeryng and Jascha Heifetz. He received his B.A. in Music from the Juilliard School, where he was mentored by Ivan Galamian, years later serving on the Juilliard faculty himself. Besides his ongoing dedication to master classes, from Austin, Texas and Aspen to North Korea and Vietnam, Dicterow has chaired the innovative orchestral performance program at the Manhattan School of Music for two decades. He is also a faculty artist at the Music Academy of the West, following three years of participation in Music Academy Summer Festivals.

“Perhaps the most important thrust in my teaching and mentoring is finding ways to get students to express themselves emotionally and musically on their instrument. While there is no shortage of technically perfect playing in the world of music, it can often be that great music is flattened over, lost in this manner. I hope to inspire students to create their own individual sound and style, thus enabling their music making to come alive. There are techniques and mindsets that help allow vibrant music to breathe again, to excite us in its immediacy, its human passions. That is what I hope to accomplish: to take capable players and turn them into musical artists.”
– Glenn Dicterow 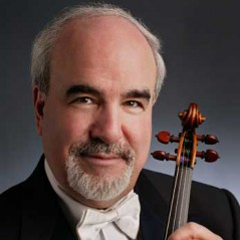