With early personal roots in classical piano and musical theater training, King’s musical interests and accomplishments are broad, spanning pop, R&B, gospel, jazz, rock and other styles. As a scholar and public intellectual with a PhD from his NYU alma mater, his multi-disciplinary work includes African-American and African Diasporic cultural studies; performance studies, globalization and transnationalism studies; media and technology studies; music business, marketing and branding studies; and gender and queer studies. In his capacity as a professor at New York University, King taught classes for more than two decades on popular music history and geography, identity and cultural politics, artist development/A&R and music marketing/branding, and the social aspects of music technology. Among the courses he has taught: Artist Development, A&R and Personal Branding; Conversations with Technology Entrepreneurs; Immersive Experiences; Worldmaking and Ethics: Transforming the Music Industry Through Social Justice Leadership, Activism and Organizing; Failure; The Record Producer as Creative Artist; Music Recommendation and Discovery; Freddie Mercury; R&B; and Hip Hop: History, Music and Culture. He taught the inaugural class at the NYU Abu Dhabi campus in the United Arab Emirates, and he returned as affiliated faculty to teach classes in global music production and technology at NYU Abu Dhabi for four years. King also taught post-graduate studies in Producing Transnational Media Ventures for the MFA program in International Media Producing at Tisch School of the Arts Asia in Singapore.

In his leadership capacities, King developed a number of the Clive Davis Institute’s signature programs, including its free high-school pipeline program Future Music Moguls and its unique Professional Development initiatives. King brought numerous guests to NYU’s Tisch School, from Pharrell Williams to 100 gecs, De La Soul to Blood Orange, Nile Rodgers to Jamila Woods and Q-Tip to Alicia Keys. He produced or co-produced many events for NYU and outside of NYU, too: from a 2022 weeklong artist residency with R&B and electronic music innovator Dawn Richard to the Club Classics Live! concert extravaganza at Central Park Summerstage featuring Sam Sparro and Ultra Naté; to the Pop Conference with Esperanza Spalding, ?uestlove of The Roots, Angelique Kidjo and Santigold and a two-day “The Making of Public Enemy’s It Takes a Nation of Millions” with Chuck D and Hank Shocklee; to “Sylvester: The Life and Work of a Musical Icon” (produced with Carolyn Dinshaw and José Esteban Muñoz) with Martha Wash and Kevin Aviance; “The Making of Planet Rock” with Arthur Baker and Fab 5 Freddy for a two-week hip-hop festival at NYU; and Motown’s 50 anniversary series with guests like the late Leon Ware and Raphael Saadiq. In most cases, he also served as music supervisor and orchestrator for concerts associated with those events. As the host and keynote producer of the annual Pop Conference for the past several years, he has recruited musical superstars like Steve Perry, Alanis Morrissette, Dua Lipa, Youssou N’Dour, Arooj Aftab, Rostam, Roisin Murphy and Lido PImienta to take part in the conference.

King has published numerous scholarly essays; he recently wrote about Beyoncé and Jay Z’s “Apesh*t” video for the Journal of Popular Music, and on the politics of Drake’s “Toosie Slide” for the Het Nieuwe Instituut’s For the Record video series. He has been a longtime music journalist and internationally recognized cultural critic for publications like Pitchfork, Slate, Red Bull Music Academy, Vibe, The Village Voice, The Los Angeles Times, Spin, Billboard, Buzzfeed, Quartz, The Root and Vice.

King has also been a contributing member of the NPR Music Team. Besides writing for NPR Music, he was the host and co-producer of NPR’s flagship video documentary series Noteworthy, on the creative process of music superstars. Season One featured interviews with Alicia Keys, Maxwell, Miguel, Banks and Anthony Hamilton. For that series, he championed then-emerging artist Dua Lipa, co-producing a documentary on her music that became her first ever U.S. media interview and helped launch her as a global superstar. King was the curator and host of NPR’s 24/7 streaming radio channel dedicated to soul and R&B music called “NPRandB,” and worked on R&B video programs with Babyface, King, Jazmine Sullivan, Ledisi; and he produced and hosted the 2020 series Pop Talks, an NPR pop-up interview series featuring artists like Dua Lipa, Moses Sumney, Holly Herndon, and Victoria Monet. He was the host of CNN’s original podcast series Soundtracks: The B-Sides. Some of his favorite interviews include Pharrell Williams, Devonté Hynes, Kelela, Nick Jonas, Mary J. Blige, as well as George Clinton for NPR Music and Harry Belafonte for Apple’s Meet the Musician series.

King served as a guest curator for Vevo, a consultant for Spotify, and he has served on the boards of several technology start-ups. As creative director of his own entertainment company Superlatude, King has consulted for record labels, branding and marketing firms; and he has served as a music marketing and branding expert in high-profile cases for artists like Drake and Jay Z, as well as Katy Perry, Timbaland, Madonna, Lady Gaga, 50 Cent, Dr. Dre and more. He has also been artist manager/strategist for international major label and indie label artists (Jimmy Edgar, The Craig Lewis Band), and he was the music supervisor, live event and concert producer and musical arranger for Indian cult pop star Asha Puthli. He was also the founder/driving force behind innovative New York based dance music superband Company Freak, featuring original lead singers of Chic Norma Jean Wright and Alfa Anderson and Hubert Eaves of D-Train. The band’s first EP, Le Disco Social, was remixed by DJ Spen, Justin Faust, Eric Kupper, Jodie Harsh, Opolopo and many others. Other studio productions: “Hold On (He’ll Be Right There)” for soul music icon Sarah Dash of Labelle; executive producer of Selan’s Space Flight album, featuring special guests Nile Rodgers, Emily King and M1 from Dead Prez.

King is the author of The Michael Jackson Treasures, a Barnes and Noble exclusive biography on the King of Pop, which has been translated in more than 7 languages. His blog entry “Michael Jackson: An Appreciation of His Talent” appears in the Da Capo Press Best Music Writing 2010 compilation, edited by Ann Powers. King wrote the liner notes for a Luther Vandross compilation for Sony Music, and for the vinyl exclusive reissue of D’Angelo’s Voodoo for Light in the Attic/Sony. He appears in many music documentaries, including Netflix’s This is Pop series, and ReMastered: The Two Killings of Sam Cooke, as well as two Spike Lee documentaries, Bad 25 and Michael Jackson’s Journey from Motown to Off the Wall.He stars in Henry Louis Gates’ 2022 series Making Black America and he was a series regular on two CNN series: Soundtracks, produced by Dwayne ‘The Rock’ Johnson, and CNN’s American Style. He was the series consultant on the Grammy and Emmy nominated eight-part PBS series on the history of popular music called Soundbreaking, in which he also appears. King was the host, co-writer and executive producer of Spotify’s 2022 Sound Barrier podcast; season 1 focused on the life and times of disco superstar Sylvester. In 2021, The Beatles’ company Apple Corps commissioned King to write A Shot of Rhythm and Blues, a four-part investigative radio series on The Beatles and Black music. It was hosted by Meshell Ndegeocello and lives on the Beatles’ Sirius radio channel.

King is currently delving into directing and producing his own documentaries, and he is at work on a revisionist biography of Freddie Mercury. He is also an inaugural member of the Hip-Hop council at the Kennedy Center for the Performing Arts in Washington, D.C., the Black Genius Brain Trust, and he serves on the advisory board of the Journal of Popular Music Studies. 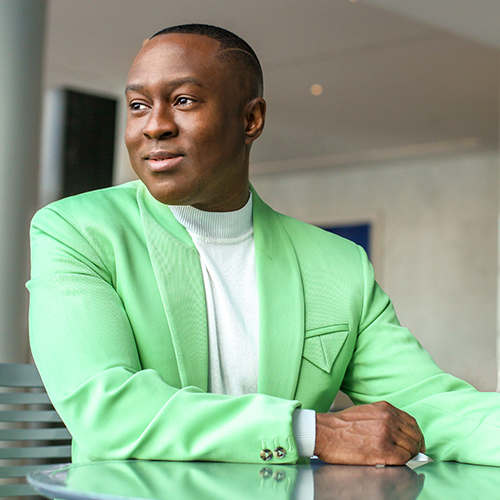