Turovsky is also a “first call” musician for a plethora of film and television assignments. The composer John Williams wrote a solo piece for Turovsky that was featured on the soundtrack of the film Angela’s Ashes, while her performances also grace such films as Avatar, Raiders of the Lost Ark, The Karate Kid, Toy Story (plus its sequels), The Kite Runner and Thirteen Conversations About One Thing, among the more than 400 movie soundtracks in which she has participated. Most tellingly, it is Turovsky’s playing that sends chills up the spine in a variety of horror movies, among them War of the Worlds and video game classics including Resident Evil 5.

“First and foremost, we are all musicians and unique individuals. I strive to encourage, guide, mentor, and prepare young harpists for success in a rapidly changing world.” – JoAnn Turovsky 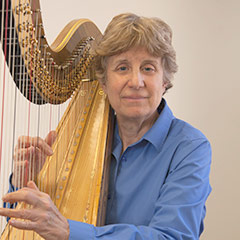