Trombonist, composer and B.A.C. endorsing artist Jon Hatamiya is one of the most promising trombonists to come out of the Sacramento area and is rapidly making a name for himself in both the New York and California music scenes. He was recognized in the August 2011 issue of Jet Magazine as the only trombonist on Wynton Marsalis’s “Who’s Got Next” list, which highlighted the next generation of emerging jazz artists. Hatamiya released his debut album as a leader, More Than Anything, on Orenda Records in early 2020, as well as an electronic EP, Some Might Say (Revisited), in December 2020.

As a performer, Hatamiya has established a wide-ranging reputation reflecting his diverse musical interests. In the big band world, Hatamiya is known as a lead trombone specialist with a soulful and fiery resonance, as well as a supportive and responsive section player. This versatility and knowledge of the big band tradition has led him to performances and recordings as lead trombone with the Kyle Athayde Dance Party, Jacob Mann Big Band and the big band on Michael Bublé’s albums Love (2018) and Higher (2022), and as a member of the trombone sections of the Bob Mintzer Big Band, John Daversa Progressive Big Band and the Jazz at Lincoln Center Orchestra with Wynton Marsalis, among others.

Hatamiya is also widely regarded as an imaginative and receptive improviser and a proponent of the trombone as a modern creative voice. He appears in numerous smaller group settings that emphasize improvisation, musical communication and spontaneity such as nopanda (Los Angeles-based quartet) and SMILES (collective quintet with members based all over the U.S.) He has served as a sideman and featured soloist in performance, touring and recording with artists such as Louis Cole, David Binney, Luca Alemanno, Paul Cornish’s BANNED and Logan Kane’s Flotation Band and Nonet.

Hatamiya is active as an educator, having been faculty at the Lafayette Summer Music Jazz Workshop and the Stanford Jazz Workshop, guest clinician at the Sitka Jazz Festival and Stanislaus State Jazz Festival and a traveling clinician for the Monterey Jazz Festival. He is currently instructor of jazz trombone at Sacramento State University and El Camino College, applied classical trombone instructor at Cosumnes River College and adjunct faculty at the USC Thornton School of Music, where he directs the Thornton Concert Jazz Orchestra. He also works as a bandleader with the New York City-based jazz-rock fusion band XD 7 (with two self-released recordings) and the Jon Hatamiya Big Band, as well as several other ensembles under his own name ranging from trio to nonet.

His work as a composer and arranger (beyond in his own groups) includes commissions from Los Angeles trombone quartet Skinny Lips and the Sound Malfunction, Oakwood Brass, SFJAZZ, Fernando Pullum Center and numerous high school- and college-level big bands around the world. Hatamiya received the 2021 Jeff Clayton Memorial New Note Award from the Los Angeles Jazz Society, leading to an original, 40-minute work, Where Did it Go? (a reflection on the COVID year), which was premiered by the Jon Hatamiya Big Band at the 2021 Angel City Jazz Festival. He also received the 2021 ASCAP Johnny Mandel Prize, the 2015 and 2021 ASCAP Herb Alpert Young Jazz Composer Awards and a 2016 Downbeat Student Music Award for his merits as a composer and arranger. In 2019, Hatamiya was asked to arrange Australian grade school student-written melodies selected by Herbie Hancock into the theme song for International Jazz Day. Hatamiya’s arrangements have been performed by such major artists as Michael McDonald, John Mayer, Aloe Blacc, Jhene Aiko and Jackson Browne.

Hatamiya received his bachelor of music degree in jazz trombone performance from Manhattan School of Music (where he was given the John Clark Award for excellence in brass performance), his master’s of music in jazz studies from the USC Thornton School of Music and an additional master of music degree from the prestigious Thelonious Monk Institute of Jazz Performance (now known as the Herbie Hancock Institute). 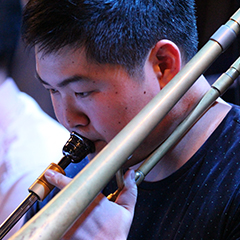