Kathleen Grace is an internationally recognized jazz vocalist, songwriter and educator. She is a member of the jazz faculty at the University of Southern California Thornton School of Music in Los Angeles where she has directed the CreSCendo vocal jazz ensemble and currently heads the solo vocal jazz combo program. Grace has toured worldwide appearing at venues as varied as the Montreaux Jazz Festival, The Kennedy Center and the SXSW Music Festival. Known as an artist that blurs boundaries between genres, Grace is also a studio performer and most recently appeared with Portugal the Man on the American Music Awards, and will be featured on Jim James’ (My Morning Jacket) solo 2018 album. Her forthcoming release “Tie Me To You” is a collaboration with pianist, keyboardist and songwriter Larry Goldings and features violinist Gabe Witcher (The Punch Brothers) and David Piltch (KD Lang).

Born and raised in Tucson, Arizona, Grace received her undergraduate degree from Tufts University, where she first explored vocal arts with the faculty of the New England Conservatory of Music in Boston. She studied free vocal jazz improvisation under the direction of Molly Holm, an original member of Bobby McFerrin’s ensemble Voicestra. Grace received her master’s in jazz studies from the USC Thornton School where she studied under mentors Tierney Sutton and Shelly Berg.

Grace has performed at festivals in Europe, the U.S., and South America. She was a finalist in the 2004 Montreux International Jazz Vocal Competition and was awarded a spot in the Betty Carter Jazz Ahead Residency for young composers at the John F. Kennedy Center for the Performing Arts.

Her first CD, Sunrise, received critical acclaim as one of the top debuts of the year and earned a Blue Chip Award from IAJE jazz critic Herb Wong. Her latest CD, Mirror, released on the Monsoon label, is now establishing her reputation as a composer and lyricist. Her musical quintet, The Kathleen Grace Band, blurs the boundaries between musical genres using jazz language to explore the spaces between the worlds of folk, rock and jazz. A lover of American popular song, Grace is now among the vanguard of a small but exciting movement of young jazz singers who are, in her words, stepping “outside the box of the American Songbook into the world of original music.” She and her band have traveled and appeared in both jazz and rock venues from California to New York.

Grace is a passionate jazz educator who has served as a clinician for jazz ensembles, solo jazz programs and creativity workshops around the country. 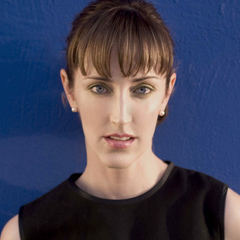