Following her prodigious beginnings on bass at age 8 and studies under renowned vocalist Tierney Sutton at 12, Thiroux was mentored by the legendary bassist John Clayton and was awarded a Phil Ramone Presidential Scholarship to Berklee College of Music while gaining experience on the bandstand with artists including Terrell Safford, Terri Lyne Carrington, Branford Marsalis, Larry Fuller, Ken Peplowski, Jeff Clayton, Patti Austin, Geri Allen, Helen Sung, Charles McPherson and dozens of others. She was a finalist for the prestigious 2015 Thelonious Monk International Competition, and in a field where very few women get recognition, Thiroux is not only recognized but is a mentor to other female musicians.

In 2015, Thiroux self-released her debut album as a bandleader, Introducing Katie Thiroux, which was named debut album of the year by All About Jazz, Huffington Post and Jazz Journalists Association, while NPR Jazz listed the release among their top five debut records of the year. Her most recent album, Off Beat, from GRAMMY nominated label Capri Records collected rave reviews, including being named best album of 2018 by DownBeat Magazine with Thiroux named a rising star jazz bassist in the 2019 and 2018 DownBeat critic polls. Thiroux works closely with the Monterey Jazz Festival as a traveling educator, and in 2019, she was named the inaugural director of the Monterey Jazz Festival Women in Jazz program. This features an international group of gifted young women who she mentors throughout the year. 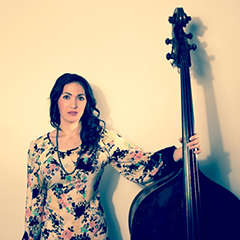