The Woman Behind the Music 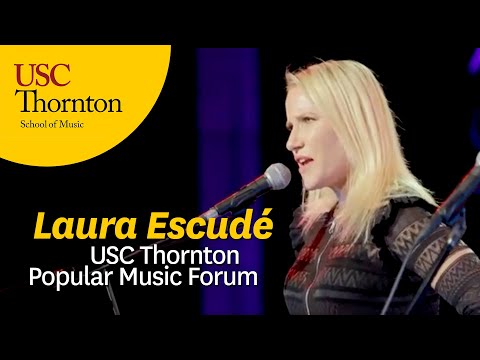 Pull back the curtain of any blockbuster performance from the likes of Kanye West, Jay Z or Bon Iver and you won’t find the Wizard of Oz pulling levers – but you might just find a woman like Laura Escudé hunched over a series of computer monitors. Escudé is a cutting-edge music producer, live show designer, performing artist, and classically-trained violinist.

As part of the USC Thornton Contemporary Music Division’s focus on music production — highlighted by the launch of a new degree in 2016 — Escudé was invited to present to the Popular Music Forum last year.

Escudé, who performs under the name Alluxe, was studying classical violin when she began to explore electronic music. Her entrance into the world of live show programming began with an invitation from Cirque du Soleil to work on a show in Las Vegas.

“It opened the doors to this whole other world which is live show design,” she said.

She has gone on to work with a who’s-who of pop stars, including Kanye West, Jay Z, Charli XCX, Demi Lovato, Bon Iver, The Weeknd, and a host of other world-famous artists.

Her advice to students? “Don’t wait for inspiration to hit. Just begin, start experimenting. Figure out who you are as a person and as an artist first.”