Lina Bahn is a violinist who has a keen interest in collaborative and innovative repertoire, and has been called “brilliant” and “lyrical” by the Washington Post. Her most recent publication of Mean Fiddle Summer on the Naxos Label was hailed by the ClevelandClassical.com, “From start to finish, the violinist demonstrates her adroit technical facility, kaleidoscope of colors, and consummate musical taste.”

As a committed educator, she has been on the faculty at the Thornton School of Music since 2014, and taught at the University of Colorado-Boulder from 2008-2015. She has taught masterclasses and lessons throughout the world, including those at the Yong Siew Toh Conservatory in Singapore, the Sydney Conservatory, Hong Kong University, Renmin University in Beijing, The Royal Conservatory of Music in Toronto, among others. She was on the faculty of the Sierra Summer Academy of Music from 2001-2013, the Institute of the Palazzo Rucellai in Florence, Italy, and taught during the summers at the Borromeo Music Festival, Green Mountain Chamber Music Summer Festival, Atlantic Music Festival, Mostly Modern Festival, and the Chamber Music Conference.

As a member of the award-winning Corigliano Quartet, they held residency posts at The Juilliard School, Indiana University and Dickinson College, as well as on summer faculty at Madeline Island Chamber Music Festival, Marrowstone, Canandaigua Chamber Festival, and the Chicago Suzuki Institute. The quartet’s performances have brought them to such venues as The Library of Congress, Alice Tully Hall, Ravinia Festival, Corcoran Gallery, Phillips Collection, Carnegie Hall, and the Library of Congress, and earned them the ASCAP/CMA Award for Adventurous Programming. In 2007, their Naxos Records recording of quartets by John Corigliano and Jefferson Friedman was selected by The New Yorker magazine as one of the year’s “Best 10 Recordings.” The Corigliano Quartet was lauded by the Strad Magazine for their “abundant commitment and mastery”, and praised as “musicians who seem to say ‘listen to this!’” by the New York Times. They have been broadcast on NPR’s Performance Today, All Things Considered, and Backstage Pass, Chicago’s WFMT’s Live From Studio One, and can be heard on the Albany, CRI, Naxos, and Bayer Labels.

In Washington, D.C., Bahn was the executive director and violinist with the VERGE Ensemble for fourteen years, while it was the resident ensemble of the Corcoran Gallery of Art. The VERGE Ensemble performed in Paris, New York, Cleveland, at the Livewire Festival (UMBC) and Third Practice Festival (Richmond), and was the resident ensemble for the June in Buffalo Festival in 2009. They have performed at Le Poisson Rouge, The Issue Project Room, and the National Museum of American Indians. She is was a member of the National Gallery New Music Ensemble of the Smithsonian in 2010, which gave its inaugural performance in the East Wing, performing works of Xenakis, Antosca, and a premiere by Roger Reynolds. The National Gallery Ensemble participated in the 2012 Washington D.C. John Cage Centenniel Festival, with performances at the East Wing, the NGA Auditorium, and at the Maison Française of the French Embassy. These included premieres of composers Christian Wolff, Beat Furrer, Robert Ashley, and George Lewis.

In 2017, Bahn collaborated with cellist Matt Haimovitz to produce a program dedicated to ocean/water awareness at the National Gallery of Art. Other chamber music performances more recently include a 2022 performance at the Oregon Bach Festival of Akoka: Reframing Messiaen’s Quartet for the End of Time, with Matt Haimovitz, David Krakauer, and Kathleen Tagg.  Bahn’s collaborations over the years include festivals such as the Costa Rican International Chamber Festival, Grand Canyon Music Festival, Garth Newel Music Series, Festival de Música de Cámara de San Miguel de Allende, and Music on the Hill in Rhode Island. In the spring of 2010, Bahn was on tour with the Takacs Quartet, performing at Carnegie Hall, the Southbank Centre, Concertgebouw, and the Mariinsky Theater. From 1992-1994 she toured extensively throughout Chile with the Bahn-Mahave-Browne piano trio as a recipient of national grants to teach and perform. In 2005, their piano trio was selected to perform for the president of Chile and the King of Indonesia, in Kuala Lumpuur.

As a soloist, she has made appearances with the Chicago Chamber Orchestra, The Chicago Symphony Orchestra, La Orquesta Sinfonica de la Serena (Chile), and the Malaysian National Symphony Orchestra, the Fort Collins Symphony, and Pro Musica Colorado Chamber Orchestra. Solo recitals include those at the Phillips Collection, The Stone, Issue Project Room, and at The Corcoran Gallery of Art. She has worked with numerous composers such as Ken Ueno, Dan Visconti, Jeffrey Mumford, Adam Silverman, Steve Antosca, Keith Fitch, Daniel Wohl, Benjamin Broening,and has worked with composers such as Roger Reynolds, Morton Subotnick, and Pamela Z.

Bahn studied with Dorothy DeLay at the Juilliard School for her undergraduate degree. She completed her Masters degree at the University of Michigan as the recipient of the Jane Bryant Fellowship Award under the tutelage of Paul Kantor. Her Doctorate in Music is from the Indiana University, where she was an Associate Instructor and studied with Miriam Fried and Paul Biss. Dr. Bahn’s early training in Chicago started with Lillian Schaber and she finished her high school years under the guidance of Roland and Almita Vamos. 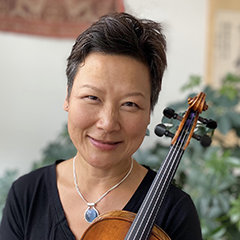